After several days and a sleepless night of worrying, I made it to the start line of Newport marathon. Sadly I wasn’t with my husband, who had become ill just the day before. I felt so sorry for him as he had put in all the training. It was going to be his first marathon.

On the plus side, he had at least driven me down there.

I arrived and immediately joined a toilet queue – which was rather long. I realised I was woefully underdressed. It was going to be around 12 degrees, but rainy and windy. I had my hoodie and a bin liner on over my kit and I was frozen! I felt rather lonely wandering around on my own. Everyone else had people with them. Nearly everyone seems to run with someone and at the very least they have family there to cheer them on. 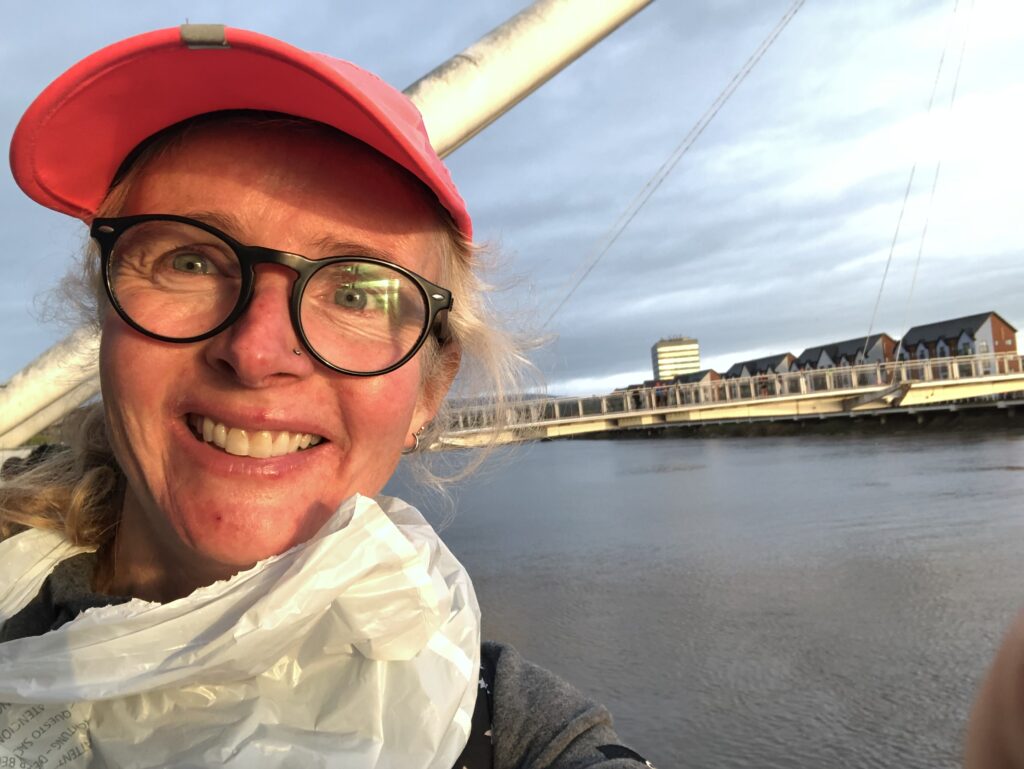 It took me ages to locate the bag drop. I was very sad to let my hoodie and my glasses go. Now I was even colder – and I couldn’t see. Then I joined another long toilet queue. They definitely don’t have enough toilets! By the time I emerged from the portaloo it was 8.55 and I hadn’t even located my starting pen. Luckily it was right opposite the toilets, although I couldn’t find the entrance, so I climbed over the fence. Then it was time to part company with the bin bag. Now I really was cold!

At 9am, the marathon started. It was a bit of a jog to the start line and then we were off. I had trained to a 9:30 pace, which should take me hours 4 hours and 9 minutes. As soon as I started running, my left trainer felt loose. So I stopped to tighten it. I’ve literally never done that in my life before. Then I worried that I’d already lost ground, so I ran a bit faster to catch up. My watch is notoriously bad at measuring (it measures a parkrun at 2.94 miles rather than 3.1 and Cheltenham half marathon was 12.5 rather than 13.1!). I didn’t do the maths properly, but thought I should aim for a 9:25 pace to compensate for my watch’s issues.

We reached the one mile marker at a spectacular bridge, then it was through an industrial estate and we were pretty much in the countryside by around two miles. The two things I remember most about Newport marathon last time are the endless ditches full of green water and the massive Tesco distribution centre! I think it was about three miles when I saw the first green ditch and they seemed to be there throughout the run.

Around three miles, we encountered an unexpected crowd of people cheering, which was lovely. Then round a corner there was an even bigger crowd of people. Lots of people shouted my name and it gave me a huge boost every single time. It’s so nice of them to stand there and shout out a bunch of strangers’ names for hours.

Then we were at the big Tesco distribution centre.

It was raining lightly when we set off and it rained pretty much all the way round. It wasn’t until around seven miles that I realised just how wet I was. It eased off occasionally, but always started again. At least I wasn’t cold any more.

I struggled with my pace a bit. I kept finding myself running at 8:55, so I tried to slow it down and found I was running at 9:50.

I think it was around six or seven miles that there was a farm van on a corner pumping out the loudest tunes, which was brilliant and cheered everyone up. I was listening to Radio 1, but the sound of someone else’s music was a big boost.

On this road, there was a cone in the middle of the road, which I thought had been placed there to cover a hole. People had decided to use it as a bin and it was surrounded by gel wrappers. On the one hand, I can see the logic. The cone would have to be cleared away, so the wrappers could be cleared away too. But fundamentally it’s just litter and really thoughtless. My litter all remained in my belt!

I was fuelling by alternating Bloks energy sweets and Go Bites natural energy balls and I was eating every two miles. I had a bottle of Lucozade Sport and a bottle of water. I also took water from quite a few of the water stops, which were about every three miles.

Then I realised there were lots more cones in the road and they were clearly to divide the route between outgoing runners and returning runners.

Around the nine mile mark, we ran through a housing estate and then it was into Magor town centre. Magor is the furthest point on the route, although it’s only at 10 miles. We were hit by a wall of sound and excitement. There was music and crowds and just so much happiness. It’s a shame it was all over so quickly.

Then it was back into the countryside. Most of the route was countryside, with lots of big houses and big gardens and weird farm buildings. They would make a brilliant setting for a crime drama. A few people here and there would be outside their houses cheering but mainly it was quiet roads and a lot of rain!

For a long time, I’d seen the four hour pacer just in front of me. I’d been tempted to catch up, but then I told myself how strict I’d been with my training, so I just stuck with my pace.

I stopped for the toilet at 13 miles, then I struggled to go! That probably lost me a minute and a half or two minutes.

We ran back up the road with the cones and back past the van pumping out the tunes, then the course went in a different direction. More farms. More big gardens.

From 17 miles onwards, a lot of people were walking. I say ‘people’, I mean men.

In the whole time I was running, I only spoke to one other runner – an older man. I’d been running alongside him for ages and he just said ‘All right?’ and I said ‘Yeah, are you all right?’. He made a noise to indicate that he wasn’t. And I told him it was only seven and a bit miles to go and that cheered us both up!

Not once did I hit a wall or struggle, but by 17 or 18 miles, everything was aching – especially my hips and my right ankle. It was a real push from then onwards. I wondered if my right trainer was too loose and not supporting my ankle properly, so I stopped to tighten it. But it didn’t make any difference! By 22 miles, it was all just one big blur of aching and stiffness. Loads of people were walking, but I wasn’t tempted.

At about 20 miles, Radio 1 stopped working, so I switched to Spotify and luckily it played me a really good selection of songs.

Just before 24 miles, the route does an out and back of probably a mile to the transporter bridge. Doing an out and back is slightly soul destroying, but it was OK as it was so close to the end. At 25 miles, we were back to the spectacular bridge and 90% of people were walking up the slope. Not me!

Once we were off the bridge, there was lots of people, all shouting my name. The rain was absolutely torrential. I knew I was going to come in slightly ahead of time, but I picked up the pace anyway. At 26 miles, just before the finish line, I got really emotional and started to cry. I’d done it! All on my own. I had no supporters and I’d run 26.2 miles in the pouring rain. 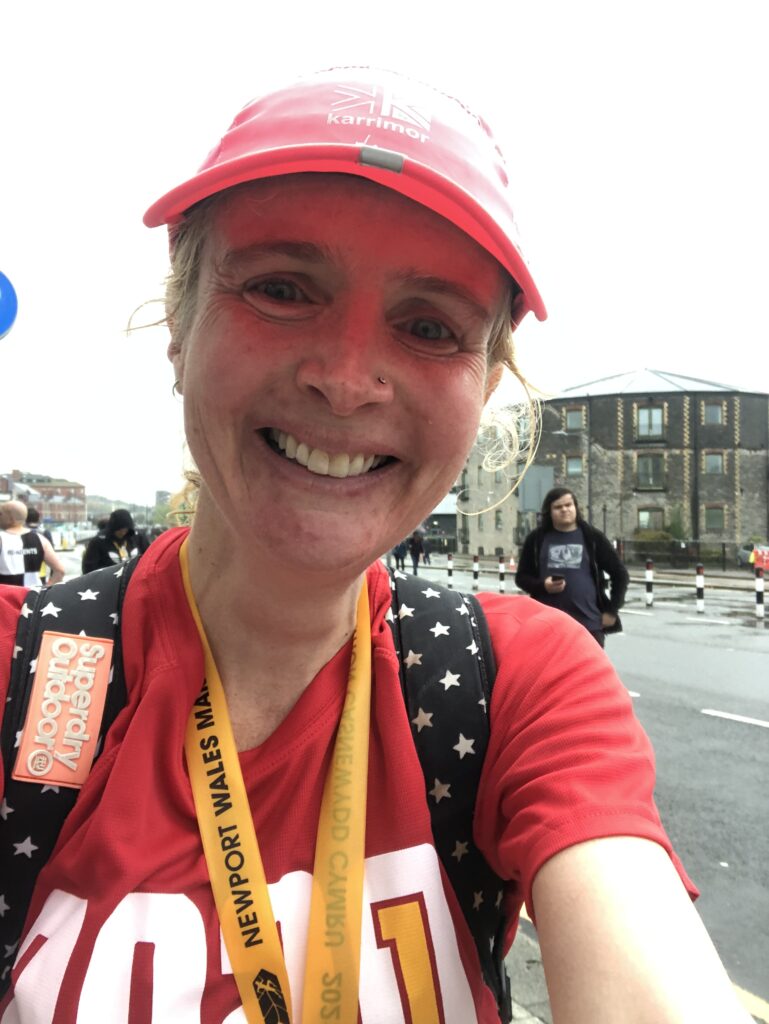 I was handed a medal and a wet run Tshirt, then I needed to get myself dry and warm and get some food before catching the train home.