Return to marathon training: Weeks 7 to 10

As I approached the middle of my training for Newport marathon 2021, I’d reached the point where my legs felt stiff and aching pretty much all the time. This is normal (well certainly normal for me) and not an indication of injury – just an indication of all the hard work I’m putting in to get stronger.

Week 7 of marathon training started with a 45 minute ‘intense run’, as it is described on my plan. That is 45 minutes/ five miles of fast intervals, which I find hard. So it must be doing me good, right? I then did six miles on Wednesday and eight miles on Friday, my longest midweek run to date. It’s remarkable how I can just run eight miles on a Friday morning, then completely forget I’ve even done it and just get on with my day. I did a slow parkrun on Saturday and 15 miles on Sunday.

When I did my first marathon in 2019, I followed the training plan to the letter. But 2020 taught us many things, including not avoiding doing things you want to do, because you never know what’s around the corner. Cheltenham half marathon fell during week 8 of training. I could have done it slowly and used it as a training run, but I realised I wanted to do it properly. So Sunday should have been a 16 mile run, but it was Cheltenham half marathon instead.

To ensure my legs were rested for it, I cut out Friday’s 40 minute/ four mile intense run. But I did still run Tuesday’s six miles and Wednesday’s five miles. Initially, I considered doing a very slow parkrun on Saturday, but I realised that if I wanted to get a half decent time for the half marathon that I needed to rest more beforehand. I signed up to volunteer at parkrun so I couldn’t be tempted change my mind and run!

I ran Cheltenham half marathon in 1:50:27, which I was really pleased with, so I was glad I eased up on the training for a few days.

Week 9 was still affected by the half marathon, as my legs needed time to recover. I skipped the first scheduled run of the week, on Tuesday. Then I did my body conditioning (which I’m doing every week, but don’t always mention) on Wednesday and was back to running on Thursday. Thursday was a gentle five miles, then I had my fast intervals on Friday. It was only 30 minutes/ three miles, but I found it really tough. Saturday was five miles – a parkrun, with a bit either side – and Sunday was 16 miles.

Week 10 was a really full-on week of running, covering a total of 44 miles – the biggest mileage of the whole plan. It started with a 45 minute/ five mile tempo run, followed by the longest midweek run on the plan – 10 miles. I then did another 45 minute/ five mile run, with a six mile run (incorporating parkrun, of course) on Saturday.

The week ended with an 18 mile long run, which started in the rain and ended in bright sunshine. Luckily I’d put suncream on, despite the rain. Remarkably, I found 18 miles easier than I found last week’s 16 miles.

My eldest joined us for the last 13 miles, as he’s signed up for Stroud half marathon and we want to be sure he’s really ready for it after he collapsed at Cheltenham. So we were nagging him to drink and feeding him Bloks. I also tried fuelling properly for the first time for this run – eating every two miles, rather than every three. The reason I’d been eating every three miles previously was mainly financial – it seems a bit silly to eat expensive fuel when I don’t really need it and am only using it to practise.

You can read about my first few weeks of training for Newport marathon 2021 here. 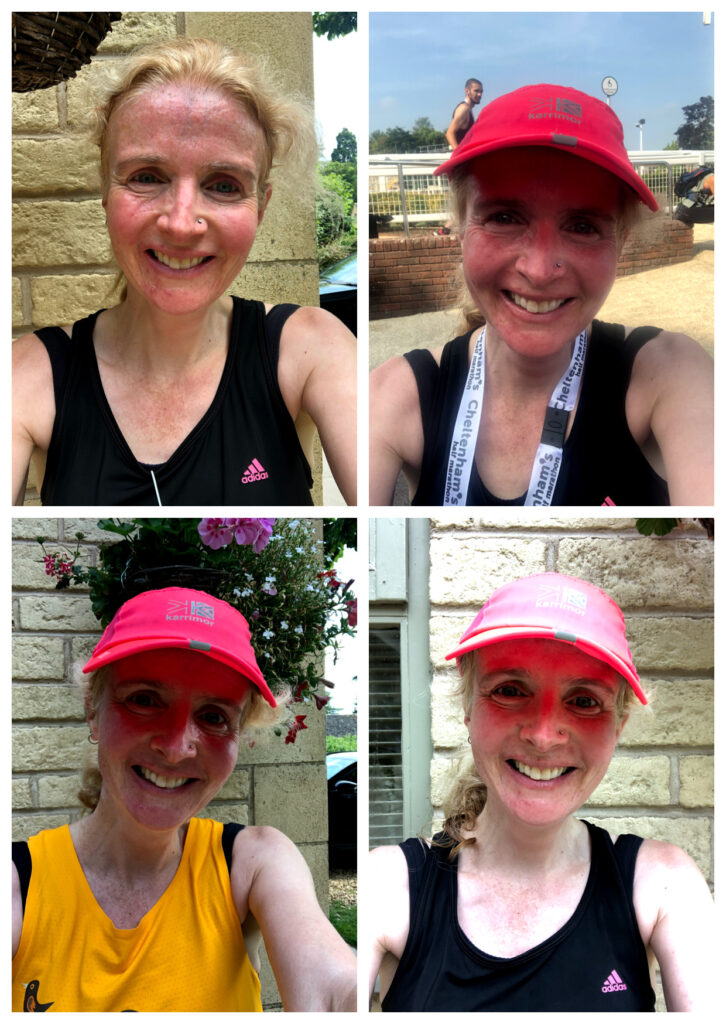