On 5th September 2021, there were five members of my family running Cheltenham half marathon. There were the usuals (my husband, brother-in-law and I), plus my sister running her first half marathon and my eldest running his second.

My son hadn’t trained that much. His longest run was 12 miles, but the rest of his runs had been between six and eight miles. He was very happy to have done eight miles at 8:10 pace the week before the half marathon and thought he could run 13 miles at that pace. We told him he would need to slow down for 13 miles.

After an entire month of thick cloud and unseasonal low temperatures, the weather warmed up just in time for the half marathon. Which wasn’t good news.

The day before, I tripped and hurt my toe badly. I was limping, in a lot of pain and it was swollen. I was really unsure whether I would be able to run. I slept badly and was still in pain when I got up. I had various contingency plans in my head for if I started and couldn’t finish. But when I started moving around the house, the pain eased. So by 7am I decided I was going to run.

My son was up before 7, already dressed in his running kit and buzzing for the half marathon.

We met my sister and brother-in-law at Cheltenham racecourse and queued for toilets, before hitting the jackpot with the ones with loads of cubicles and no queue!

As my sister was nervous about her first half marathon, my brother-in-law ran with her. They waited in the 2 hours to 2 hours 15 starting pen, while the rest of us waited in the 1 hour 45 to 2 hours pen.

The race started, and my son was off like a shot. I didn’t even have time to wish him good luck. He very quickly disappeared from sight. After much consideration, my husband had decided to run at 8:30 pace, which also sounded an achievable pace for me (a couple of minutes off my PB pace), so we decided to run together.

It felt great to be running a race again. We ran down the hill into the village of Prestbury and there were so many people out cheering. It was lovely. I don’t know if there were more people than usual out or if I’d just forgotten how many supporters there are.

We got to the first mile marker very quickly. And the second.

The route goes through Prestbury and into the town centre, up the famous Promenade. Every road was lined with supporters and the atmosphere was great.

I felt comfortable with the 8:30 pace, although I did remember that just because I can run further than 13 miles, it doesn’t actually make 13 miles easy!

The route then passes through the town centre and into the suburb of Hatherley, where you see the faster runners already going in the opposite direction. There’s a nice downhill in Hatherley, followed by an uphill. Then it’s onto Lansdown Road, which is about a mile long, before we passed the slower runners going in the opposite direction. I hoped I’d see my sister. There was a surprising number of people who looked like her, but I didn’t see her.

It was then back into the town centre before joining the Honeybourne Line footpath.

I’m pleased and very surprised to say that I didn’t feel my bad toe at all.

On the Honeybourne Line, at about seven and a half miles, my husband gradually pulled away from me. Although he was always in my sights.

There were only three water stations (I’m sure there are normally five). The water was in cups, which is better for the environment than bottles, but much harder to drink. I was choking after my first one. Luckily I always carry my own drink with me anyway. My son usually carries a drink, but had decided not to, because of the water out on the course.

And then it was on to the killer bit – the racecourse.

As we entered the racecourse, I saw my mum, dad, niece and nephew, which is always a lovely boost at just the right time. My niece informed me that my son had given her his headphones to hold – so he was still ahead of us, then! I had expected to come across him at around seven or eight miles.

By this time, it was very hot. The racecourse is a wide, open area with no shade. You can see runners everywhere you look. It’s soul destroying.

I passed two young men wearing the same charity vest as my son. One asked the other if he’d seen someone with my son’s name. I asked if they were actually referring to my son. They were! I told them that he’d gone off fast. They said he was a machine. I passed them and carried on running.

My husband was still only a few metres ahead of me. I thought I could make out my son in the distance. A lovely guy from parkrun was running in a penguin outfit and encouraging me along. He was stopping and starting, sometimes even going backwards, to encourage everyone.

I closed in on my husband. And also my son.

They were staggering. Something was wrong.

Then my husband ran on.

I caught my son. He was swerving. I put my arm round him and said I would walk with him to the finish line – we were very close at this point.

He said he was fine and I should carry on.

I thought he would just walk it, sit down and be fine.

I finished in 1:50:27, which is about my usual time. I wasn’t sure I could run that fast any more after weeks of running slower for marathon training. My husband was just 30 seconds ahead of me. My sister did 2 hours and 14 minutes.

And my son? We just couldn’t find him. We searched and searched, getting more and more worried. We didn’t have our celebratory photo at the end with the five of us. We didn’t spend time chatting to my mum and dad. There was none of the usual buzz, just panic.

We found him in the medical tent in a bad way. And that’s a whole other story.

Cheltenham half marathon 2021 is one I will never forget.

After an overnight stay in hospital, my son was completely better and he was discharged. 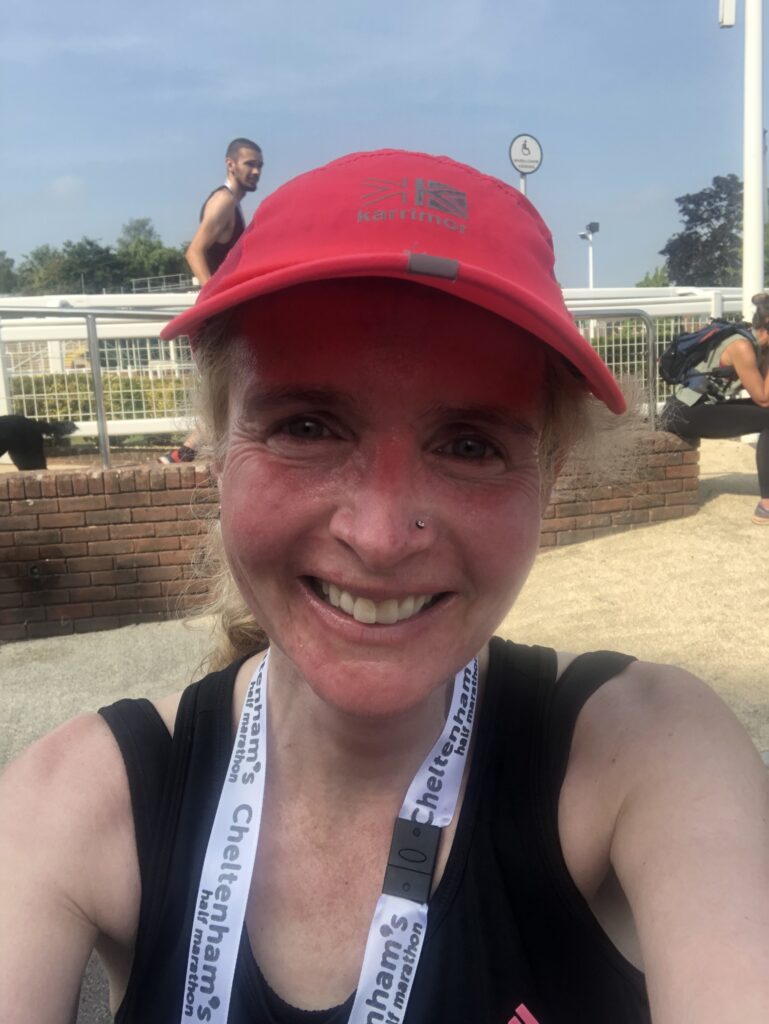 Smiling before I realised my son was in trouble