I wrote the other week about ‘maranoia’ – the special kind of paranoia you develop in the days leading up to a marathon. Because you’ve put A LOT of work in and you don’t want anything to scupper it. So every little thing becomes a worry.

In the last few days before Newport marathon, the maranoia reached a whole new level.

It actually started at the end of September, when my daughter finally did her D of E bronze expedition. The next day, she came home from school and announced that loads of people who’d done D of E had got Covid. There was nobody in her actual group, but all the groups were together in the evening, and there were people she’d sat with who’d got it.

Although in the end it turned out they hadn’t got it.

But they actually had.

She said there were two illnesses going round school – Covid and a ‘really bad cold’.

But thanks to the government’s shambles with the testing facility in Wolverhampton that gave around 43,000 false negatives, there was A LOT of people going round happily spreading Covid without realising it.

The really bad cold was actually Covid of course.

So the D of E Covid spread through my daughter’s year group like wild fire over the next few weeks. It got closer and closer to my daughter – from D of E to someone she sits by in her lessons to a close friend and finally to her best friend.

And my daughter still didn’t catch it!

But when her other close friend caught it, it was game over for my daughter.

She woke up ill last Thursday. She had a negative lateral flow, but had a lot of Covid symptoms, so we booked her in for a PCR, which came back positive. She also had a positive lateral flow test the next day.

So with three days until the marathon, we had Covid in the house! Of course my daughter is unvaccinated because the government (yes, them again!) said all 12-15 year olds would be offered the jab before half term, but my daughter’s school haven’t been offered it. I wasn’t pleased to receive a government letter yesterday urging me to get her jabbed.

IT’S TOO FLIPPING LATE! SHE SHOULD HAVE BEEN OFFERED IT EARLIER!

Meanwhile, I’d been getting mild cold symptoms – a slight sore throat, sneezing more than usual (I’m a big sneezer anyway) and even a slight earache. But I knew that I could take echinacea and the symptoms would go.

I was nervous of telling my husband about my cold symptoms because I knew it would freak him out, but I just suggested we both take echinacea until the big day.

Newport marathon clashed with Stroud half marathon, which may be my favourite half marathon, this year. Despite what happened to him at Cheltenham half marathon, and despite a big lack of training, my eldest took my Stroud place. My parents were going to take him there and stay with him – mainly because we were all a bit worried about him!

But then my dad got ill too. Nothing serious – and not Covid – but he couldn’t take him. My daughter and younger son had planned to go to Newport with us, but as my daughter couldn’t go, that freed my son up to drive his brother to Stroud.

I almost didn’t dare believe we would do the marathon, but none of us caught Covid. By Saturday, the day before, I was feeling confident.

But in the afternoon my husband started to feel under the weather – a bit hot and a bit shivery. I’d hoped it was just extreme paranoia, but he was definitely ill. He did THREE lateral flows that day and two the next day. It wasn’t Covid.

He went to bed saying there was ‘only a five or 10 per cent chance’ he’d be able to run.

If he wasn’t running and my boys were using my car, I would have to drive to Newport in the dark in my husband’s car. I’m not the most confident of drivers, especially when I’m going somewhere I don’t know and especially when I’m driving a strange car. I wasn’t keen on this. And nor was my husband. He doesn’t trust me to park it without scratching. I don’t trust myself, either!

Alternatively, if my husband stayed negative for Covid, he could drive my son so that I could drive my own car. If he tested positive, I suggested we just pay for an Uber for my eldest. (We don’t generally pay for stuff for him, but I knew he would moan about paying for it himself.)

So I went to bed not knowing if my husband could run, not knowing how I was going to get there and generally worried about Covid!

I slept in the spare room to keep me safe from whatever my husband has. I say ‘slept’, but that was only from 11 until 2.56am. When I woke up, I hoped it was a time starting with 4 or 5, but feared it would be starting with 3. It was even worse than that.

And that was game over for my sleep. All those worries went round and round in my head. These were exacerbated by worries about my tiredness making it harder to run. Would it be safe for me to drive home after so little sleep and a 26 mile run? What would I do if I didn’t feel safe to drive?

It went round and round in my head.

I even reached the conclusion that maybe it would be better if I just tested positive for Covid. Then I could just go back to sleep and forget all about it!

But at 5.15am, I got up. We both tested negative for Covid, so my husband said he would drive me down to Newport. I would then get a train back.

All that worrying for nothing. I was going to run Newport marathon!

On Monday evening, on his SEVENTH lateral flow test in three days, my husband tested positive for Covid. 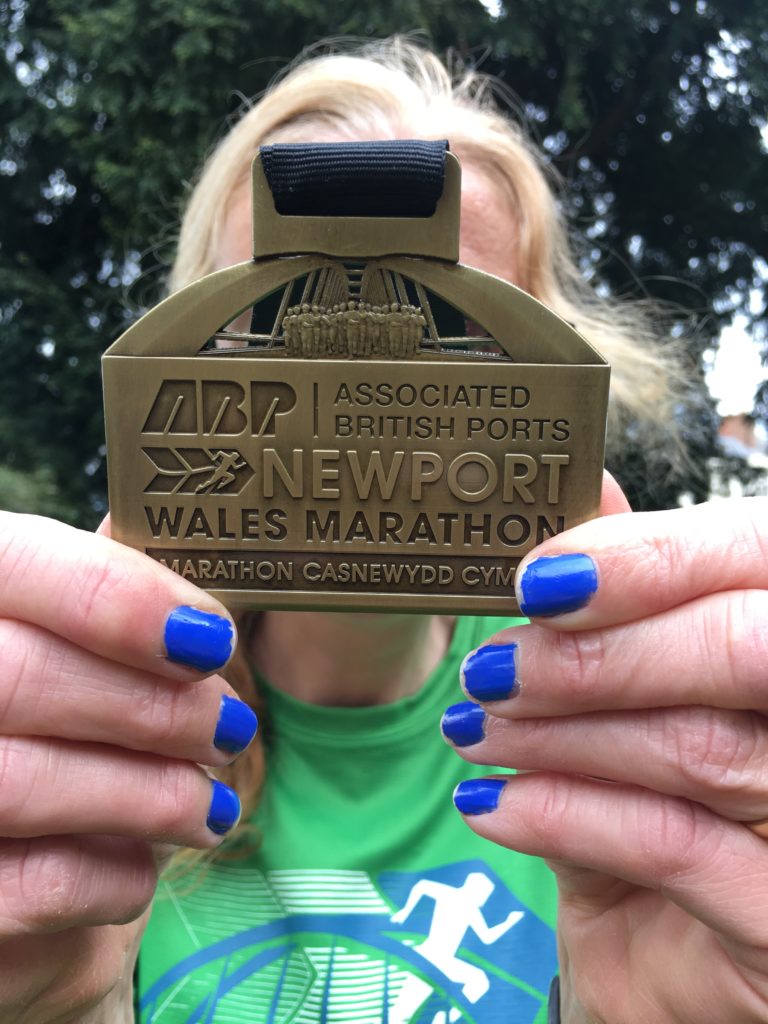