Fifteen weeks of hard training in the rain and the cold. Sixty-seven runs, 440 miles. Eighteen mile runs on a Sunday morning, sprints in the local park, slow parkruns, a very wet half marathon and weeks of the dreaded body conditioning have all been leading up to this. My first marathon.

The last two weeks hadn’t been the easiest. I’d had a bad cold, which had turned to sinusitis and I’d accepted I still wouldn’t be feeling 100% on the morning of Newport marathon.

For two weeks, I’d been watching the weather forecast. It was May, it wouldn’t be cold. I was just hoping it wouldn’t be too hot – or wet like Warwick half marathon. I was going to be wearing my charity vest and my shorts, so was hoping for something between 12 and 14 degrees and cloudy. The forecast was for five degrees and thick cloud at the start, rising to 11 degrees by the end. Five degrees is not vest and shorts weather. I stuck an old Cheltenham half marathon top under my charity vest and wore my three quarter length leggings. I also put a bin bag in my rucksack and put suncream on, because you never know!

I slept dreadfully the night before. I got to sleep easily at 10, but woke at 2.54 for the toilet and couldn’t get back to sleep. I eventually fell back into a very light sleep in the spare room at just after 4, before getting up at 5. Our support team was my husband and daughter. We picked my brother-in-law up at 6.45 and we were off to Newport! The journey was quicker than expected and there were no problems with road closures and parking. We were at the start line and in the (surprisingly short) toilet queues at just after 8. And the sun was shining! I’d ditched my old half marathon top in the car because the weather was very different from the forecast. I realised I didn’t have suncream on my shoulders, which is not good for someone on Roaccutane.

There were four start pens. My brother-in-law was in the ‘second fastest’ pen and I was in the ‘second slowest’. I’ve been training with Radio 1 on for the last 15 weeks, and had even bought extra data for it, but couldn’t get the radio to work – I think there was too much demand on the 4G at the start line. So I just put my own dreadful playlist on – mostly assembled during the noughties. I managed to get the radio to work after a mile, thank goodness! 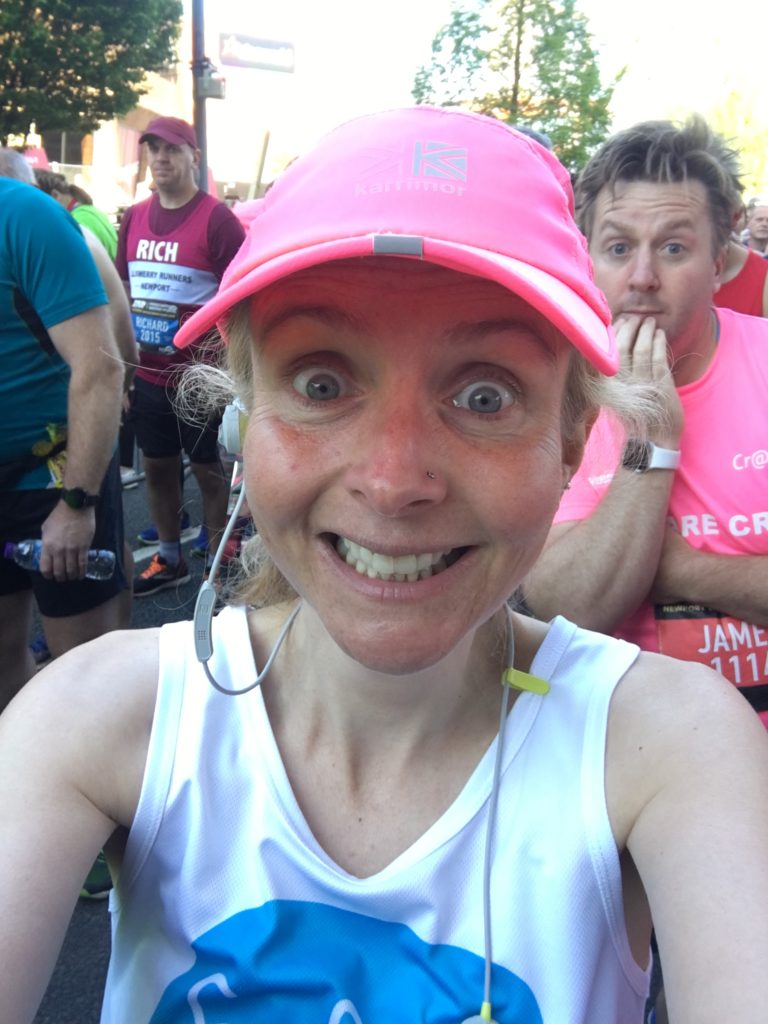 The race started promptly at 9am and we were across the line within two minutes. My brother-in-law had already vanished – there were a lot of tall men wearing blue tops. This was it! I was running a marathon! I pinned a smile on my face and took a couple of photos, which I always like to do at the start.

The 1 mile marker was on a stunning bridge. And my husband and daughter were there waiting for me. They had taken bikes down with them so they could get around more easily. They rode alongside me for a mile and half, chatting to me. I was starting to think they would be with me all the way, but then we got to a narrow bit and they couldn’t get through. I didn’t see them again for over 20 miles. 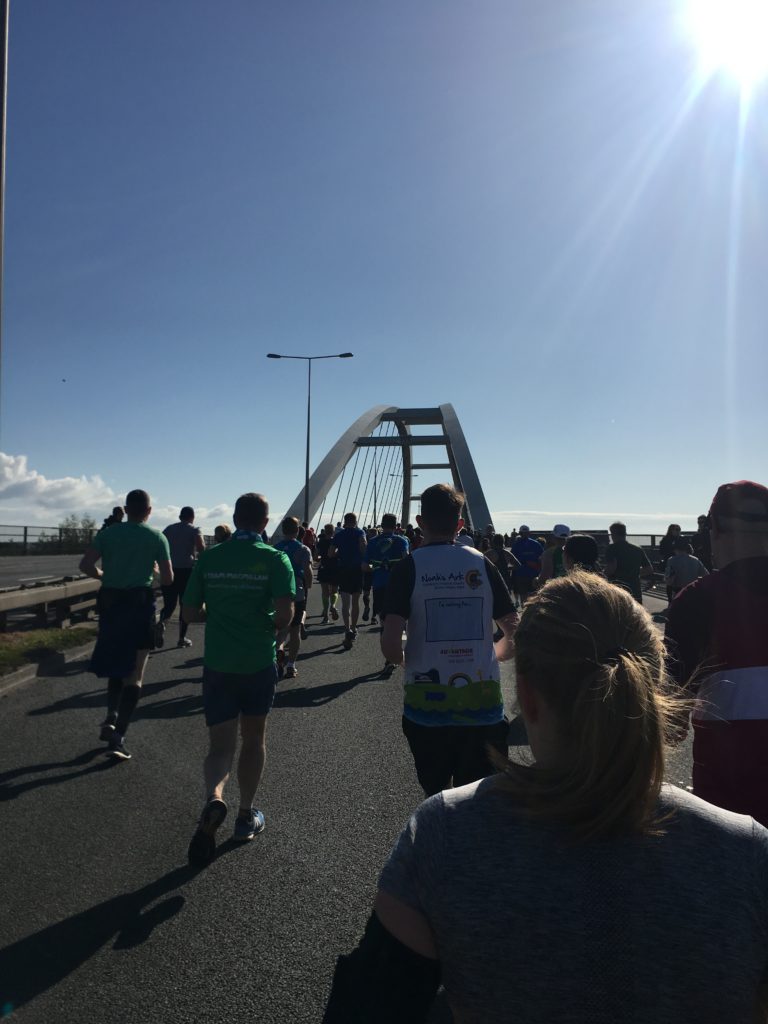 The course quickly left the town and went into the countryside. I was doing well with sticking to my 10 minute/ mile pace I’d set myself. The main aim was to finish in under 4 hours 30. The real aim was to finish in 4 hours 22. That was what I’d trained to do and I was convinced I would manage it.

We seemed to be running along the outside of the TATA Steel works forever, then we went past a Tesco depot that seemed to be about a mile long. There were farmhouses and small groups of houses, with a couple of people sat outside them cheering. And there were endless ditches with green water in them!

The village of Magor, at 10 miles and the furthest point on the course, felt like a big party. So many people cheering, with cow bells and maracas. It was a lovely atmosphere. There were a lot of handmade banners, with what appeared to be Newport marathon’s unofficial slogan on them – ‘Don’t be shit’. This is where I saw the only person who looked like she was in trouble. A woman was being lowered to the ground by two men. I hoped it was muscular, not that she was about to pass out. I saw loads of men on the course stretching out their calves and hamstrings, but no women.

When I first read up on marathons, I read this tip to keep your spirits up – dedicate every mile to someone. So I’d made a list of family members and friends on my phone and tried to memorise it. I kept forgetting which mile was which, but I think everyone got thought about at least once! It was nice to have that to focus on from time to time.

We’d got into the habit of going to the toilet on every long training run. I didn’t know if I could run 26 miles without going to the toilet, but I decided to stop at 13 miles. There was a small toilet block at every water stop and I was impressed that only one of the toilets was in use, so I didn’t have to wait. I was in and out in under a minute.

When I came out, I found myself in a different world. The people I’d been running alongside for the last six or seven miles were ahead and I was caught up with the 4:30 pacer and her little gang. They were all very cheerful and the pacer announced all the mile marks as we ran past them. I was with them for a long time. Sometimes I would get a bit ahead, sometimes they would get a bit ahead, but most of the time I was caught up in the midst of them.

I’m pleased to say I didn’t hit a wall. That was always my plan with the 10 minute/ miles. It was a pace I felt I could sustain. But I did hit a small wobble at 18 miles, when my legs started hurting and I wondered how they would keep going for another eight miles. I felt that if I walked I would probably never start running again. So I kept running. I got my water at 19 miles and suddenly I cheered up and my legs moved faster again.

By about 21 miles, a lot of people were walking and I was feeling stronger than ever. I was overtaking lots of them.

Getting beyond 22 miles was a big thing – officially on my longest run ever. When we’re running, my husband and I try not to get fixated on the distance. I note the mile markers, but I don’t think about them deeply. I check my watch for the distance so I know when to fuel, but I’m just looking at it, I’m not taking it in. We only think about the distance when there’s ‘only a parkrun left’. At 23.1 miles (only a parkrun left) my husband and daughter appeared on their bikes.

‘There’s only a parkrun left!’ I said.

‘I was just thinking that’, said the runner next to me. 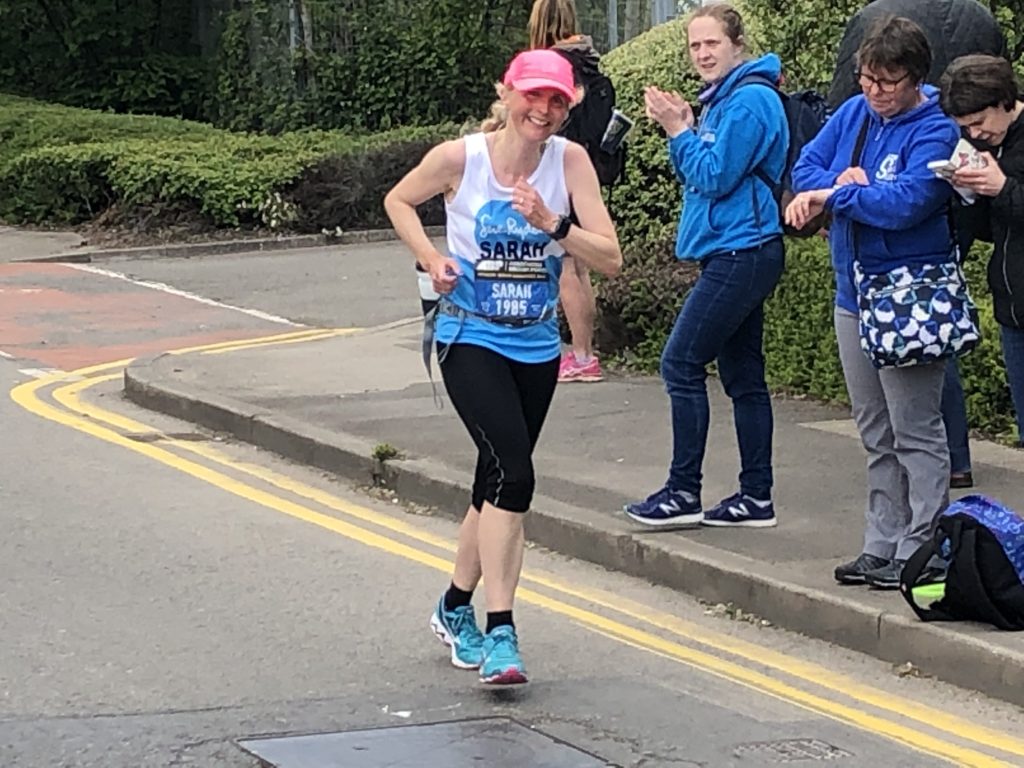 It was so lovely to see them. They knew exactly where the course was going and also told me how my brother-in-law was doing. He was close to the finish and had started off VERY quickly. He’d been three miles ahead of me for a long time, but had slowed down. They stayed with me for about a mile, then I went off for a quick ‘out and back’, which took me to 24 miles. The 4:30 pacer and her little gang were half a mile behind me now. I realised that the excitement of seeing my husband and daughter meant that I’d forgotten to dedicate my miles to two of the most important people – my daughter and my younger son.

25 miles took me back across the bridge. The course was very empty now, I was still overtaking people and lots of people were walking. I decided it was OK to pick up my pace a bit as I was definitely going to finish. This final mile belonged to the people I was running for – my sister’s close friend died earlier this year at the age of 35. She left behind a husband and three small children. She was cared for by Leckhampton Court Hospice in her final days.

My legs were really hurting now, but I was going to finish this race in style! I wasn’t going to walk a single step. My friend from parkrun was there just before the finish line and so many people were calling my name and cheering me on (what a great idea to have your name on your race number).

I was so excited to cross the line. I’d done it! 4 hours and 21 minutes exactly – one minute ahead of schedule. 26.2 miles completed at 9.58 minute miles. Not bad at all!

Huge thanks to everyone who sponsored me and all my lovely online friends who spent the day tracking me on the Run 4 Wales app. I’m so grateful for all your support.