How much does it cost to run a marathon?

Home » Family » How much does it cost to run a marathon?

Running is really one of the cheapest forms of exercise there is. There’s no gym membership to pay, no expensive equipment to buy and you don’t even have to waste petrol driving there. All you need is a pair of running trainers – and you can get a basic pair for about £30. You don’t even need proper running clothes, although most people prefer them. There’s nothing to stop you from running in an old pair of shorts or jogging bottoms and a T-shirt.

But then you start to run more. You need a better pair of trainers. You buy some proper running kit. You start entering races and paying the entrance fees. Suddenly running does start to cost money.

So how much does it cost to run a marathon?

First things first, there’s the entrance fee. Of course these vary a bit. I paid £52 for mine. As Newport was my first marathon, I paid a bit extra to have a tab with my time on to fix to my medal. I can’t quite remember how much that was.

Then there’s the trainers. Experts recommend you change your trainers every 300-500 miles. When you’re marathon training, you get through those miles pretty quickly. The trainers I bought for Tewkesbury half marathon just about made it to Stroud half marathon. I’d done 450 miles over the course of five months in them and should probably have replaced them about 50-100 miles earlier. The trainers I bought to replace weren’t going to last until my marathon. Potentially my next pair of trainers wouldn’t either. So I bought two new pairs at a cost of £79 and £85 respectively and wore them alternately, so that I would have trainers that were broken in, but still had plenty of life in them ready for the big day.

I’ve said before that I actually have very little running clothing compared to most runners. In fact, my one and only long-sleeved top is my very first piece of running clothing. I bought it in autumn 2010 in preparation for the Bath half marathon in 2011 – my first half marathon in 15 years. I was struggling to get it washed and dried between runs, so I finally bit the bullet and bought a new one from Contra at the cost of £31. Of course, I could have got a cheaper one.

Running a marathon and training for one requires fuel. If you can run with something like jelly babies, that’s pretty cheap, but if you’re relying on gels and energy sweets, it can really add up. After trying various things, I settled on Go Bites, at the cost of for £17.99 for 16 packs of three bites and Clif Bloks, at the cost of £2.49 for a pack of six. For the marathon, I would get through two little packs of Go Bites and one pack of Clif Bloks. I also consumed a lot while I as training.

I always run with a little belt, which is big enough to carry a drink and my keys and phone. But running a marathon requires somewhere to carry all that fuel, and more drink, and maybe extra things like tissues and vaseline. So I bought a larger belt at a cost of £12.99. I know a lot of people prefer the rucksack-style hydration packs, but I just thought it would make me hot, plus I wasn’t sure how accessible my snacks and phone would be. I feel happier with a belt, even though it does keep moving around.

When I printed off my bible (my training plan), it included things like ‘body conditioning’ and ‘yoga/ pilates’. I had no idea what body conditioning was. I’ve probably been telling myself for about five years now that I should take up yoga or pilates. A lot of runners do it as it’s good for recovery and injury prevention. Would I need to join a gym, get a personal trainer or start going to pilates classes? I’ve never been in a gym in my life before. Clearly these things would all cost a fair bit of money. So I decided against spending the money and thought I could work something out that would work for me using suggestions online. I did spend £7.99 on an exercise ball though, which seemed to be an essential for a lot of the exercises.

Most training plans will recommend you run a race or two as part of your training, so I ran Warwick half marathon, at a cost of £30.

I also bought a cap, in case it was hot on the day, for £6.99 and a couple of pairs of new socks for £9. I would have had to buy some new socks at some point during the year anyway.

So in short, it does cost quite a bit to run a marathon. For me, that has added up to about £375. But I’ll still have the belt, the exercise ball, the hat and the running top for next time, which I already know will be Brighton 2020. The trainers and socks will last me for a bit longer yet. And I don’t regret spending a single penny of that money. As a runner, I couldn’t think of anything better to spend it on. 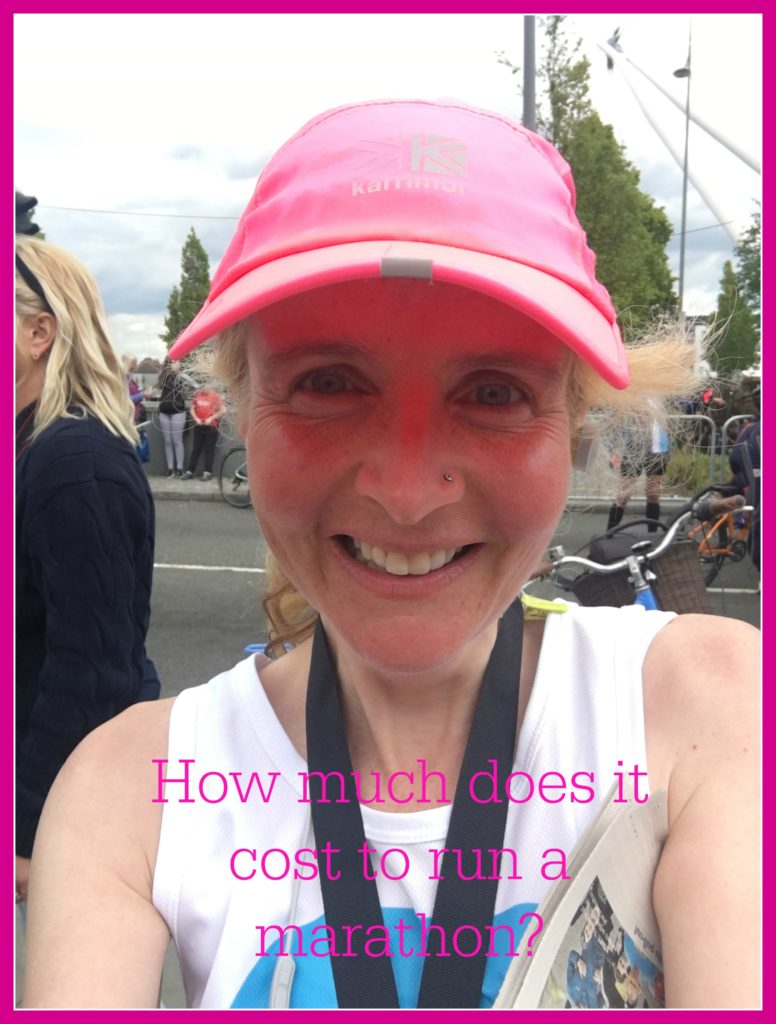