Most of the recommendations for marathon training suggest you run a couple of shorter races in the weeks leading up to your race. Doing other races has two purposes – to keep up your interest in your training so it doesn’t get too boring and to practise everything you will need to do on race day.

For me, that has to be a half marathon. I’d initially considered Forest of Dean half marathon, a race I’d done before (and not much enjoyed), but actually that fell a bit late in the training plan – on my 18 mile day.

Then my brother-in-law discovered Warwick half marathon, which fell at exactly the right time in the training plan. Then I questioned myself a bit. Was there really any point in doing it? I knew that, much as it pains me because I like running fast, I had to tackle Warwick very differently to how I usually approach a half marathon. I had to keep running right up to the race, not take my usual tapering week off.

And, most importantly, I had to run slowly on the day. I had to stick with my marathon pace, so that I could learn to run slowly even with the crowds and the excitement. I also had to run it in a way that I could still run two days later and carry on with my training. Normally after a half marathon, it takes me until Thursday until I’ve stopped aching enough to run again.

I realised there was a point and I was just going to have to take the slower time and suck it up. Nobody was going to be judging me for running over two hours. Nobody apart from myself and I had to keep in mind that it was a training run, not a race.

After a week of lovely, warm weather, Warwick half marathon day was cold and wet. I got up at 5 for a 6.45 departure and had a massive clothes dilemma. Usually in winter I run in a coat, but you can’t pin a race number to a coat. I could wear a short sleeved top under a long sleeved top, but what would I do if I needed to take a layer off? As it happens, I didn’t need to take a layer off. At the last minute, I packed bin bags. 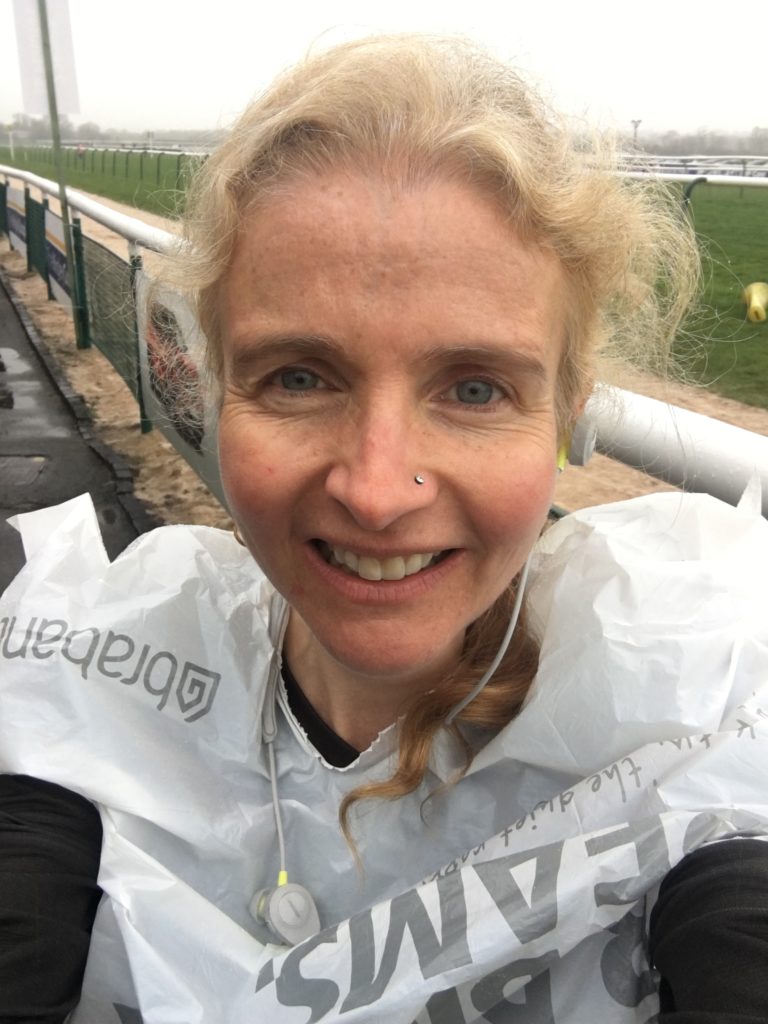 My husband decided to join my brother-in-law and I and for the first time ever, the two of us actually ran together. He hadn’t trained to run it fast and was happy to keep me company with my slow running. My brother-in-law disappeared instantly and we didn’t see him again.

The start of the race felt different because I knew it was ‘just’ a training run and not something I’d been training hard for. It made it less exciting, but I also felt less nervous about it.

The route left Warwick Racecourse, ran through a little bit of the town and, before we knew it, we were in the countryside. Parts of the race reminded me of Tewkesbury or Stroud half marathons, but Warwick has even more countryside than either of them.

Despite the slow pace, the mile markers seemed to come round pretty frequently. Warwick is a pretty hilly run and there were very few spectators, partly because it didn’t go through many villages, but no doubt also because people were put off by the weather. But the marshals kept clapping and cheering despite the rain. Huge respect to them for standing out there in the cold. Running at a slower pace, I found I was actually able to say ‘thank you’ to people when they clapped. 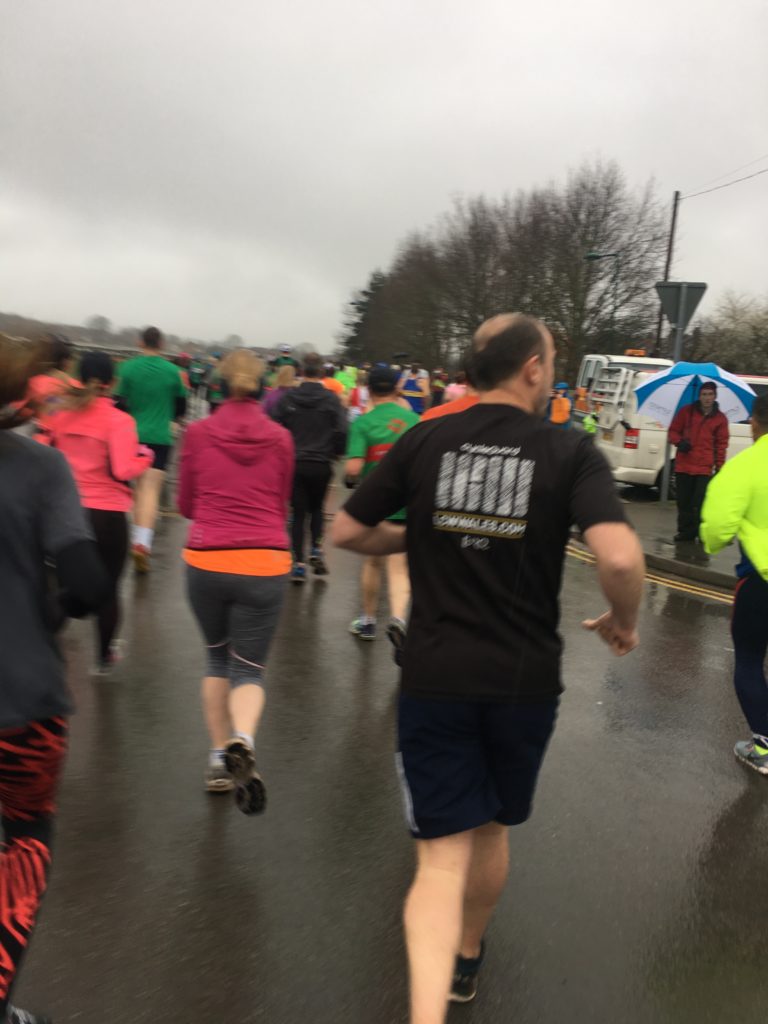 We decided to keep the bin bags on just briefly. We eventually took them off after NINE miles. To be honest, I could have kept it on the whole time. We were very wet, very cold and we didn’t warm up in the slightest during the run. When I took my trainers and socks off, my feet were soaking wet.

I tested my fuelling – a Go Bite at miles three, six and nine and a Clif Blok at mile 12. I was also trying out a new belt, with enough room for all my fuel. It comes with different drinks bottles, which don’t seem to be as efficient as my old one, so I found I was drinking less than I thought I was. I still need to consider whether to fuel more often on a marathon and what the balance of Go Bites and Clif Bloks should be, to give me enough energy, but not mess up my stomach. I’ll work that out over the coming weeks.

And my pacing? My pacing was spot on. A half marathon is 13.1 miles, so that’s 131 minutes, or 2 hours and 11 minutes. I finished in 2:10:21. I was pleased with myself for sticking to it and not beating myself up over running much more slowly than usual. I enjoyed Warwick half marathon and running it as part of my training was definitely the right thing to do.

One day I’ll go back and run it at my ‘real’ pace! 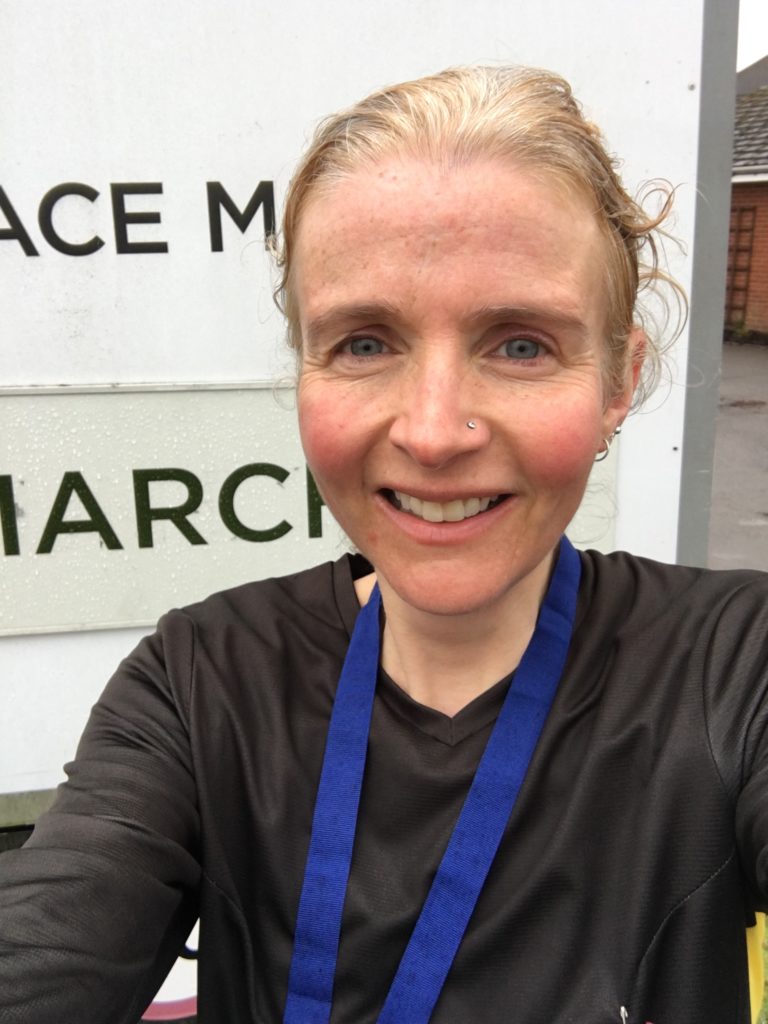