When I run a half marathon, or train for one, I don’t fuel (take on any food or gels). I’ve never needed to and I’ve never hit a wall, unlike my running partners in crime, my husband and brother-in-law. The only ‘fuel’ I have when running any distance of six miles or more is a bottle of low calories Lucozade Sport. The only reason it’s low calorie is because it’s lemon flavour and they don’t do lemon flavour in the full calorie version!

But a marathon is twice as far as a half marathon. I will burn up around 2600 calories in running it. I will need to fuel.

The main reason why I’ve never bothered with fuelling is that I have rather a delicate stomach, with IBS. I know there are lots of things that disagree with me. When you read about fuelling, it is a lot about gels. A lot of people use them and swear by them. You can take a lot of them on a long run and they really give an energy boost. BUT there are others that say they mess with your stomach. Nobody needs that when they’re running. So I need to work out what I can and can’t take when training.

I plan to train for my marathon for just 16 weeks, as I am already pretty fit and running eight miles once a week and three shorter runs. I figure 16 weeks isn’t long to test foods and find out how much of them I can take, and possibly work out a combination of several foods that work. So I thought I’d better start testing them early.

The first thing I tried, on an eight mile run, was Clif Bloks. My husband and son have both used these and say they are very good. They are also vegetarian, which is very important to me. They’re quite big sweets, the size of a chunk of jelly. When you’ve never eaten while running, they look quite daunting. I took a couple of sips of drink before I ate one. Then I bit it in half as it was too much to eat in one go.

Chewing while running is a strange feeling if you’ve never done it before. It took a long time to chew it and swallow it. Then I still had the other half to go. It actually took 0.3 miles from opening the packet to swallowing the last bit! And it was impossible to chew them and breathe while running up a hill, so I had to walk.

They taste a bit like a slightly more pleasant cough medicine. Having gone a lifetime without eating sweets, I’m generally not keen on the taste of sweets full stop.

I didn’t feel a huge energy boost, but maybe I would have done if I had hit a wall on a longer run and was desperately lacking energy. But I did feel slightly better in a way I can’t quite describe.

The good news is, I didn’t have any trouble with my stomach at all. I took two on that first run to be on the safe side.

You can take up to six an hour and up to 12 for the duration of an activity, which is a total of 384 calories.  It might be enough to fuel me, but it might also be too much for my stomach, so I would probably use them with something else. My husband ate six on the Stroud half marathon and he didn’t feel good afterwards.

Opinion is very divided on energy gels. They are the go-to for a lot of runners as they are so easy to take, but there are others who find they upset their stomachs. As an IBS sufferer, I suspected I would fall into the latter category, but I still wanted to give them a go. You can take up to 13 of them, which seems an awful lot and I couldn’t imagine myself taking that many. But if they worked, they could make life very easy (although they are rather expensive).

I chose the High5 brand, rather than the brand leader SIS, mainly because it had the word ‘aqua’ in it. They seemed to contain more water, which I thought would be kinder on my stomach. I chose two flavours I thought I would like, berry and citrus, and chose one with caffeine and one without (although it would probably have been more sensible to test the caffeine and non-caffeine versions separately). In real life I don’t have any caffeine. I don’t drink tea or coffee and I gave up my Diet Coke habit in 2007, after reading that it was bad for IBS.

I took my first one at three miles of an eight mile run and really struggled to open the packet with my sweaty hands (and that was November sweat, imagine what marathon sweat in May would be like!). I was surprised at how liquid it was, it didn’t feel like gel at all. I still found it difficult to run with a packet in my mouth, swallow and breathe at the same time and ended up with a really runny nose (Dr Juliet McGrattan has written all about running and runny noses). My hands were very sticky from the packet and I was generally a snotty, sticky mess.

But my stomach felt fine! And I actually felt like my legs could move faster. The stickiness of my hands eased fairly quickly (I had visions of myself running a marathon with a pack of baby wipes).

I took the second one (the caffeine one) at six miles. Again I got sticky, again my nose ran, but again my stomach felt fine, even with the caffeine.

I don’t think gels on their own will be the answer for me as I’m sure I will be putting myself at risk of stomach problems if I take too many, but it’s good to know that I can at least manage some. 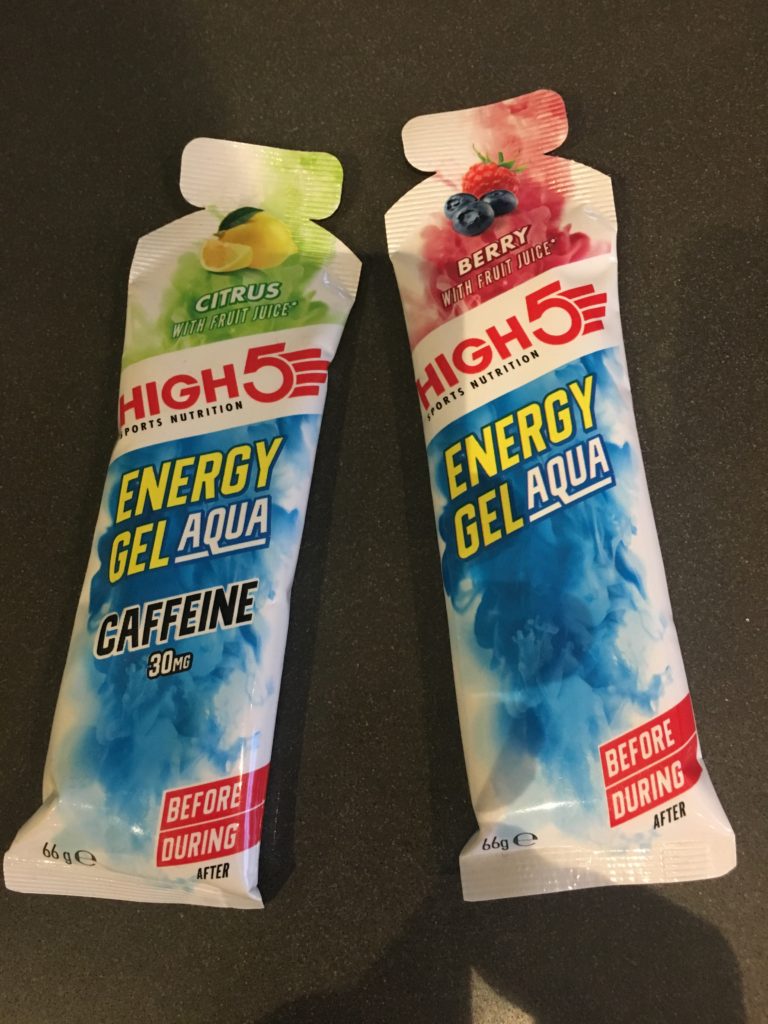