Just over two weeks before the race, holes appeared in my trainers. The holes went all the way through. My foot was being forced towards the holes, putting pressure on them, making them more likely to rip completely – and offering my foot very little support.

I was going to have to go against all common sense and get myself some new trainers just days before the race. Strictly speaking, trainers shouldn’t need a lot of breaking in – they’re soft and designed for comfort. But you shouldn’t just put a pair on and immediately run 12 or 13 miles in them. Unfortunately, that was all the distances I had left to run.

I always buy Mizuno Wave Inspire, which I’ve been told suit my running style. The shop didn’t have any.

Apparently there is a difference between a ladies’ size 8 and a man’s size 8. Who knew?

They ordered some for me. They took four days to come, so I missed one 12 mile run in them.

When they arrived, they were PURPLE. I don’t worry about the colour of trainers generally, but purple is probably the absolute worst colour for me. In the shop, they felt amazing, it felt like I was walking on clouds.

I wore them at home to break them in and my right one HURT. It was pressing on my foot. I could barely walk in in it, let alone run. It wasn’t a soreness, it was ache. I was convinced the trainers were faulty. But what if they weren’t? What if I’d just spent over £100 on a pair of trainers I couldn’t wear? I felt close to tears with the pain and frustration of the situation.

How was I going to break it in? Was I going to have to run in my trainers with holes and hope they didn’t just rip apart completely? My husband recommended a plaster, but plasters don’t tend to survive long runs that well.

But then my husband realised I was wearing insoles. I’ve been wearing orthotic insoles for about two and a half years now, after they were recommended by a physio. I had a recurring injury in my left hip/ groin and problems with my left ITB. Since getting the insoles, my problems have reduced massively.

Without the insoles, the trainers were comfortable! But they felt a bit too big. And they weren’t giving me the support I need from the insoles.

I walked in them and it felt like I could feel every footstep in my hips. Yes, I was probably overthinking it and being overly sensitive.

Could I break them in sufficiently to put the insoles back in before the race?

I’ll admit, I was scared to run in them. But I was between a rock and a hard place, with two pairs of unsuitable trainers. My final 12 mile training run included parkrun. I ran seven miles before it, then parkrun and another two miles after it. So I decided to change trainers and put my old ones on for the last five miles.

I didn’t feel any muscle or joint problems in my new trainers, but I did get a blister on the side of my foot. I tried putting plasters on when I was changing my trainers but (too much information alert), there was no way they were sticking to all the sweat.

And it was good to see that my old trainers did feel pretty bad after my new ones, even with the insoles.

Usually I just do one four mile run in the last week before a half marathon, but because my trainers still needed breaking in, I decided to do two runs that week. Luckily, my trainers felt fine.

They rubbed a bit when I first put them on for Tewkesbury half marathon, so I just tightened them up a bit. They supported me perfectly and didn’t run at all for the entire 13 miles. I even got a PB!

But I won’t be buying new trainers days before a half marathon and putting myself through that stress again. 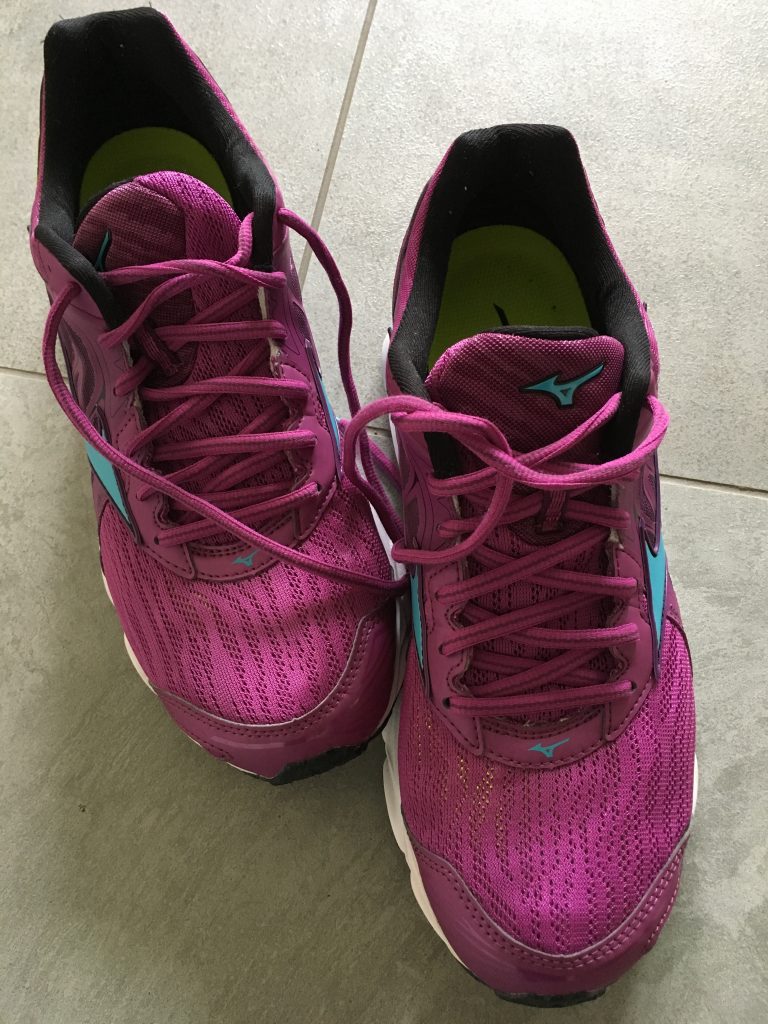