I was feeling pretty positive about Stroud half marathon 2018, despite an ankle niggle the day before, because I had my husband and brother-in-law with me. Last year, I ran it all on my own and I had a real wobble about doing it at all.

All three of us had got PBs at Cheltenham only three weeks previously, so I was going to be happy with anything in the region of 1 hour 50. The weather forecast was good, with sunny intervals. It was also set to be a bit warmer than Cheltenham, and also warmer than Stroud 2017, so no clothing worries. 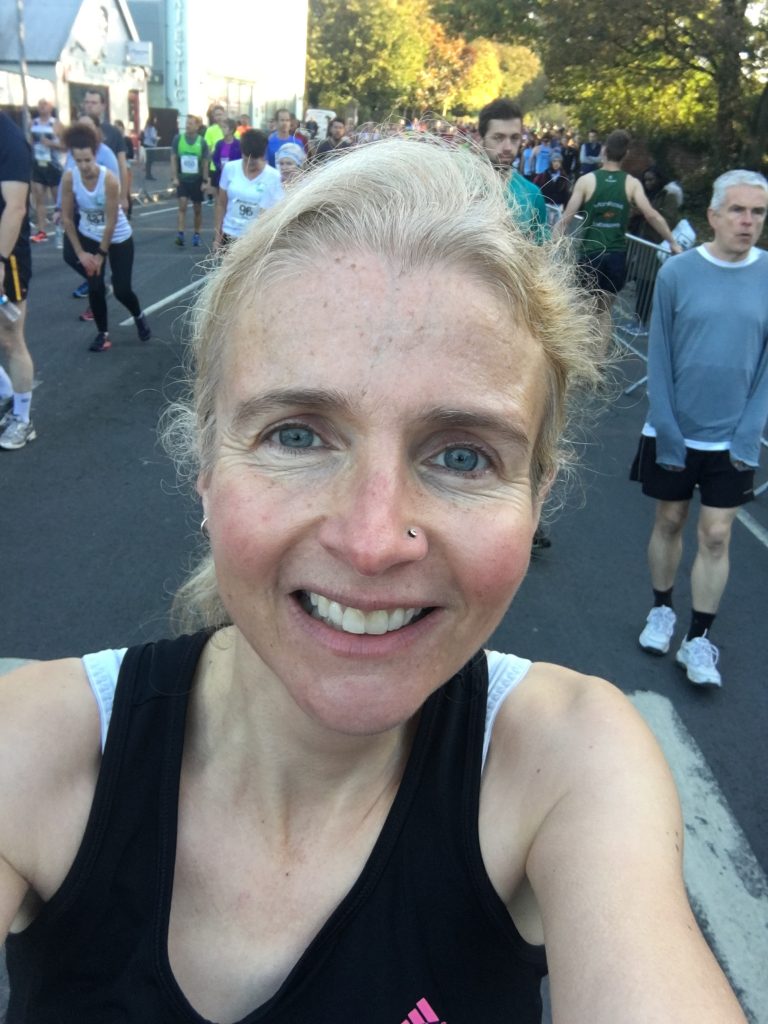 The start of the race was delayed due to THE MASSIVE BAG DROP QUEUE. Oh, and it was freezing. So much for the forecast warm weather. I had goose pimples and was shivering.

The race got underway at 9.15 and my husband and brother-in-law vanished within seconds (we just travel together, we don’t run together). Within the first quarter of a mile or so, the course gets to a big roundabout and I saw my husband leaving it just as I joined it. I didn’t see him again.

Before long, we were running through the little town of Stonehouse and the mile markers were appearing very frequently. I was running at 7:45 per mile, which is too fast. I wasn’t sure whether I should actively try to slow down, or whether I should just keep going and slow down naturally. I chose the latter. I hit three miles only a few seconds slower than I complete a parkrun (which is just 0.1 of a mile further). 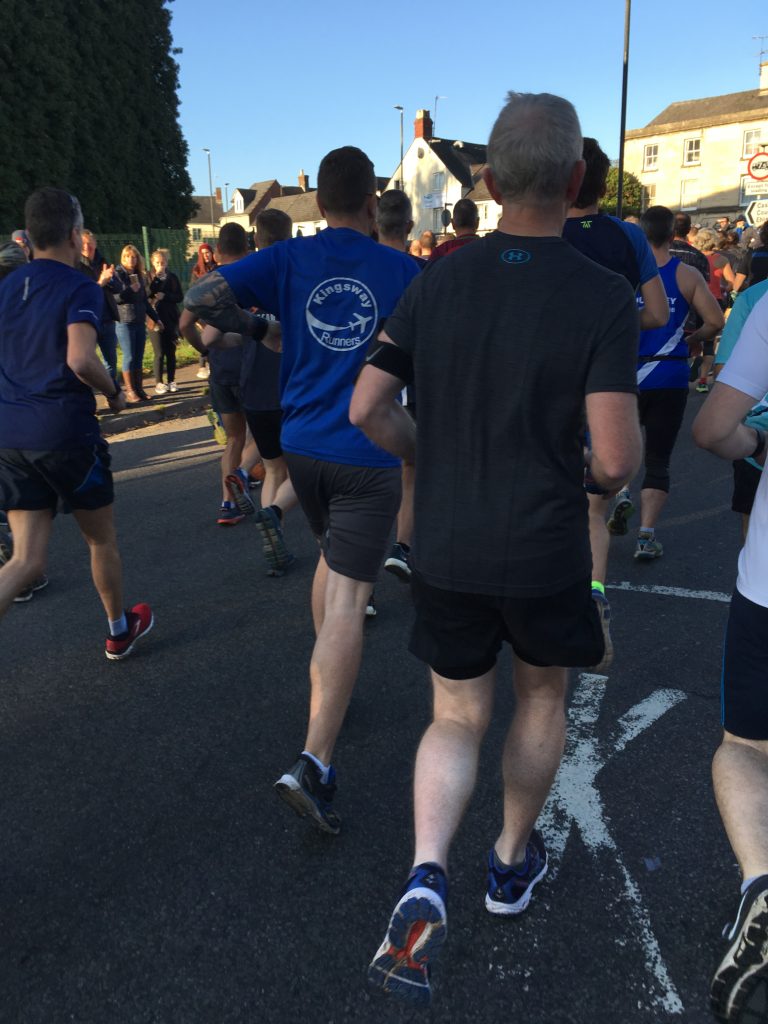 After three miles, we hit the first of the slopes. Stroud is a notoriously hilly area and everyone always says that Stroud is ‘not as hilly as you’d expect’. Last year, I didn’t find it hilly. This year, I did. Everyone also says it’s a good PB course and you can run it two minutes faster than Cheltenham. Both my brother-in-law and my husband’s friend, who I ran with for a while, were testing this theory.

The course is very rural for a while, with few spectators. Having only run it once before and, thinking I didn’t remember much about it at all, it all came back to me – from the little shops in Stonehouse to the garden selling flowers just after the A38. We ran over the motorway and into the pretty little village of Standish at about five miles, then it was onto the A38. The A38 is a main road which runs from Cornwall to Nottinghamshire (the M5 was actually based on it) and it is BUSY. We ran up the cycle path at the side of the road, uphill all the way, with just a few cones to protect us from the traffic. It felt like forever, but it was actually only 0.7 miles.

I was still feeling good at seven and eight miles. The weather was hot and sunny (no sunny intervals at all) and I was tipping water on myself at the water stops. The water was from cups – slightly more environmentally friendly and definitely cheaper than bottles. Also, entirely impossible to drink from when running. At the second water stop, I literally stopped to drink. At the third water stop, I managed to tip some onto my shorts, which is fatal. Because of chafing.

At some point around nine or 10 miles, I started to think the run was actually quite hard. It may surprise you to read that I don’t generally find half marathons or running long distances hard. We were running along the A419 back towards Stonehouse, with lorries getting a bit too close for comfort. Then it was into an industrial estate at Stonehouse, which we left at about 10 miles. There were still three miles to go and I wasn’t sure I wanted to run them.

There were lots of supporters on the route and I’d never seen so many people giving out jelly babies. The cheering and encouraging words really helps. I was definitely jealous of people who had their name on the race number, because everyone kept shouting their names.

Before we knew it, we were back on familiar territory and heading for mile 12. I was running close to the same women I’d been running alongside for a few miles. Then I looked up and saw a very familiar figure – my husband. That was something I didn’t expect. He’d been struggling with energy and motivation since mile 7. I ran a little way with him, but he told me to go ahead as he was running slower than me.

It’s remarkable how much further the finish line is than the mile 13 marker. I crossed it in 1:50:06. I was 125th woman out of 671 and 674th overall out of 1700 finishers. My brother-in-law was waiting for me, already with his medal and race T-shirt, having finished in 1:45. My husband finished just 30 seconds after me. He looked as white as a sheet.

We all thought we’d done ‘badly’, but I was only 14 seconds slower than I was at Stroud last year, and that was my PB at the time. So we hadn’t done ‘badly’ at all.

We all agreed it was a much harder race than Cheltenham, due to both the hills and the sun. But we’ll probably be back next year. We’re not going to let it get the better of us! 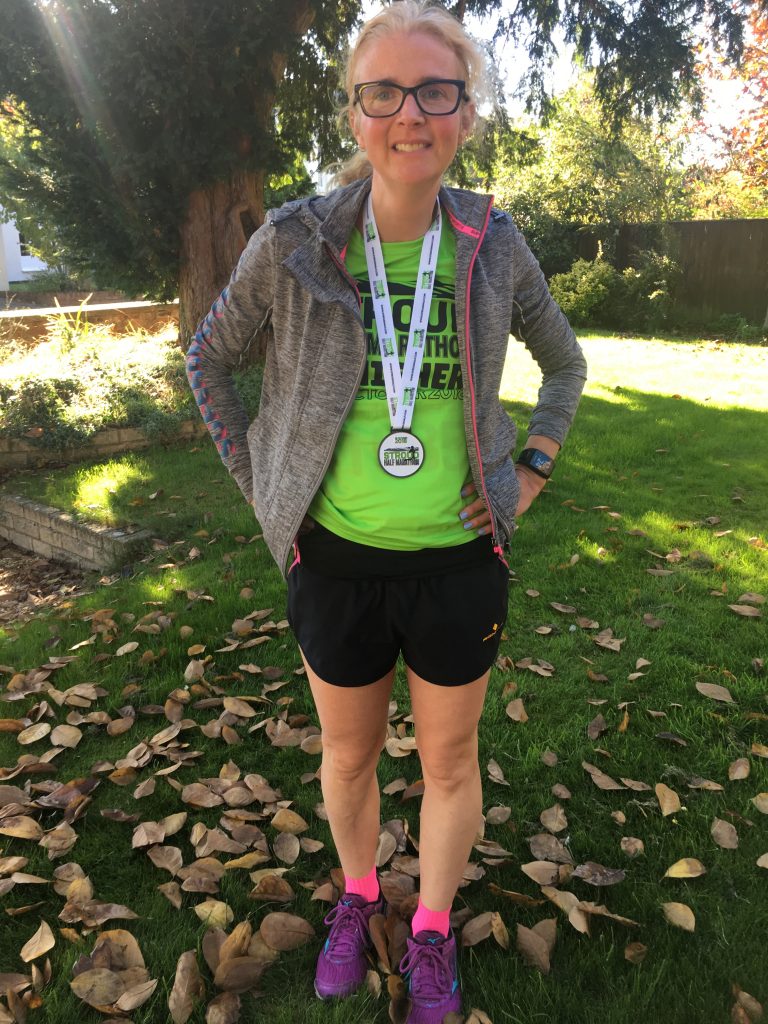