Last year, I decided I’d like to run all of the half marathons in the county over the next couple of years. Having already run Forest of Dean, Cheltenham (five times), Stroud (twice) and Tewkesbury (twice), there weren’t that many left to run. A big one to tick off was Cheltenham Challenge half marathon.

Cheltenham Challenge is a race for the charity Caring for Communities and People, which supports homeless people and works towards social inclusion in the Gloucestershire area. There is a 5k, a 10k and a half marathon race, so anyone can enter.

I stumbled across Cheltenham Challenge two years ago. My husband and eldest were training for the Three Peaks and I was out walking with them over Cleeve Hill, near Cheltenham. It was a very hot day. And people were running (or more often walking) over the hill. It looked horrendous. But I knew I wanted to do it. My husband said he would never do it, but somehow as soon as I signed up, he couldn’t resist. I knew it would be tough. But a tough half marathon has still got to be easier than a marathon, right? 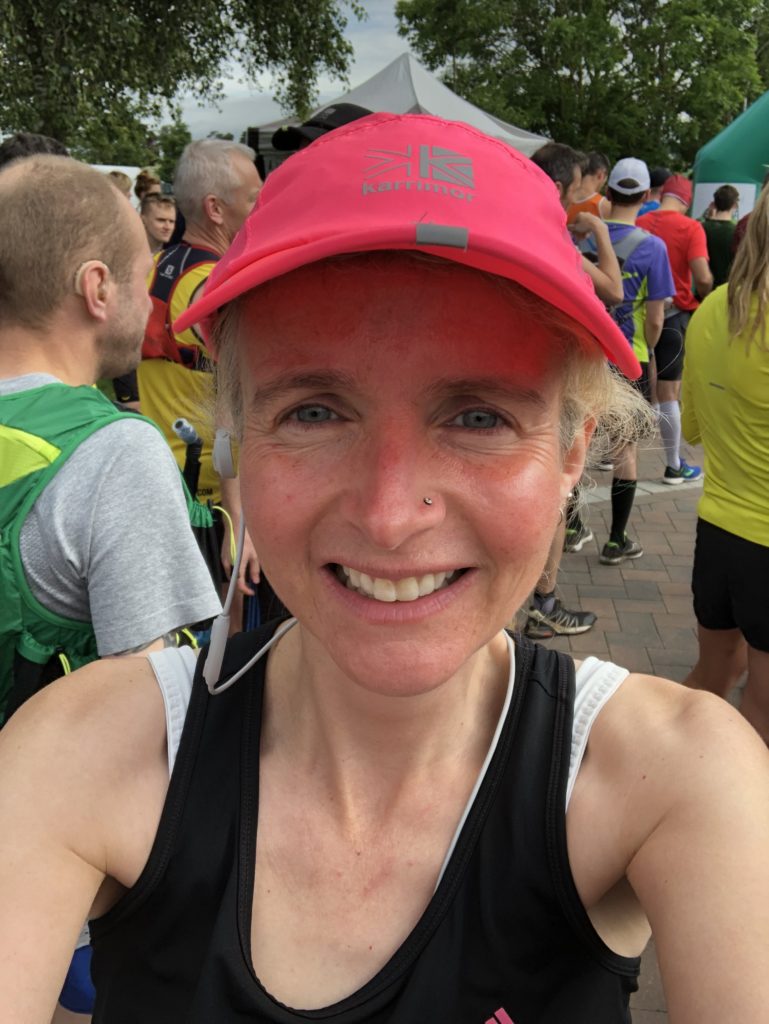 My brother-in-law ran it last year and said it was horrendous and he would never do it again, but I still wasn’t deterred. I did four training runs up hills (in addition to my usual training) – three short ones and a 12 mile one. But nothing could have prepared me for Cheltenham Challenge.

The race starts at Cheltenham Raceourse, just like Cheltenham half marathon does. But it uses a different part of the site (with much shorter toilet queues!). I hate running round Cheltenham Racecourse at the end of the half marathon, but Cheltenham Challenge runs round it at the start and takes a completely different path. I think I ran some of it for the Race for Life in 2013 (a truly horrendous run in the worst heat). 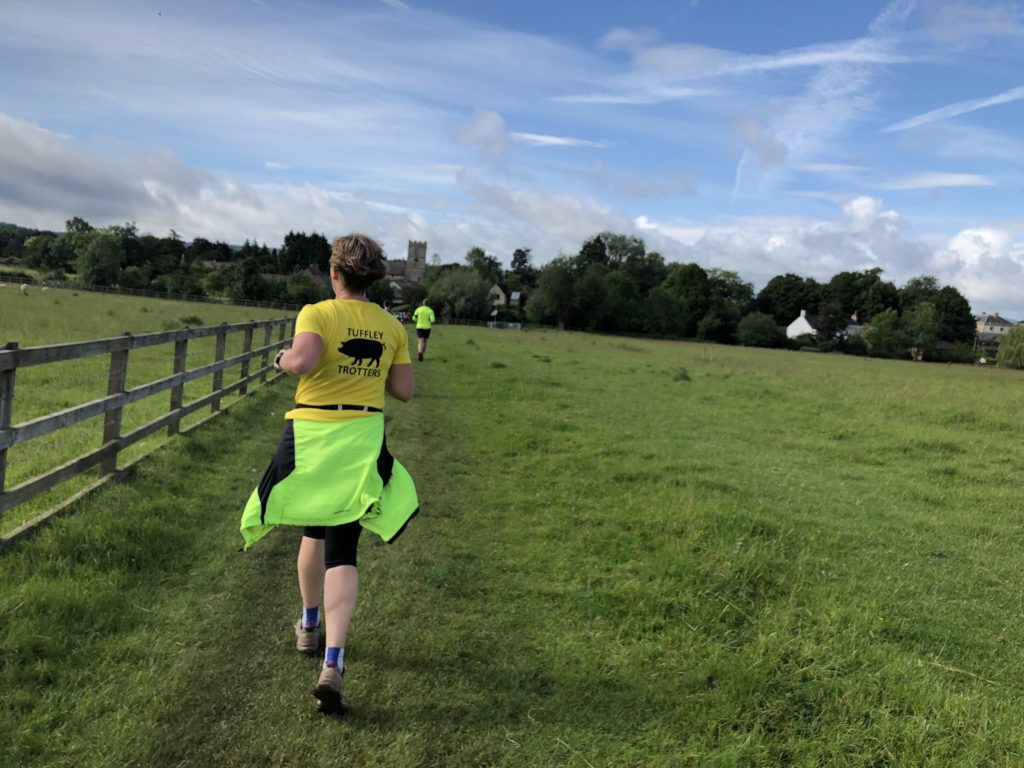 It had done nothing but rain for nearly two weeks and the forecast was for more rain. But I still put my suncream on. My husband was wearing an extra layer and I was starting to stress as I only had a vest on. We walk up Cleeve Hill quite a bit and it is ALWAYS cold and windy, whatever the temperature in town. At the last second, my husband took his extra layer off.

As we started to run, alongside the steam railway track, the sun came out. The run took us through a number of rather wet fields and we avoided the puddles. If we’d had any idea what was to come, we wouldn’t have bothered avoiding the puddles. We eventually came out into a part of the village of Prestbury I had never seen before, a much nicer part than I had ever seen.

We ran along narrow footpaths and fields, through very small gates and over a stream. It was such a pleasant run.

And then we got to five miles. And the sign that said: ‘Welcome to Noverton Hill. You’ve got this.’ 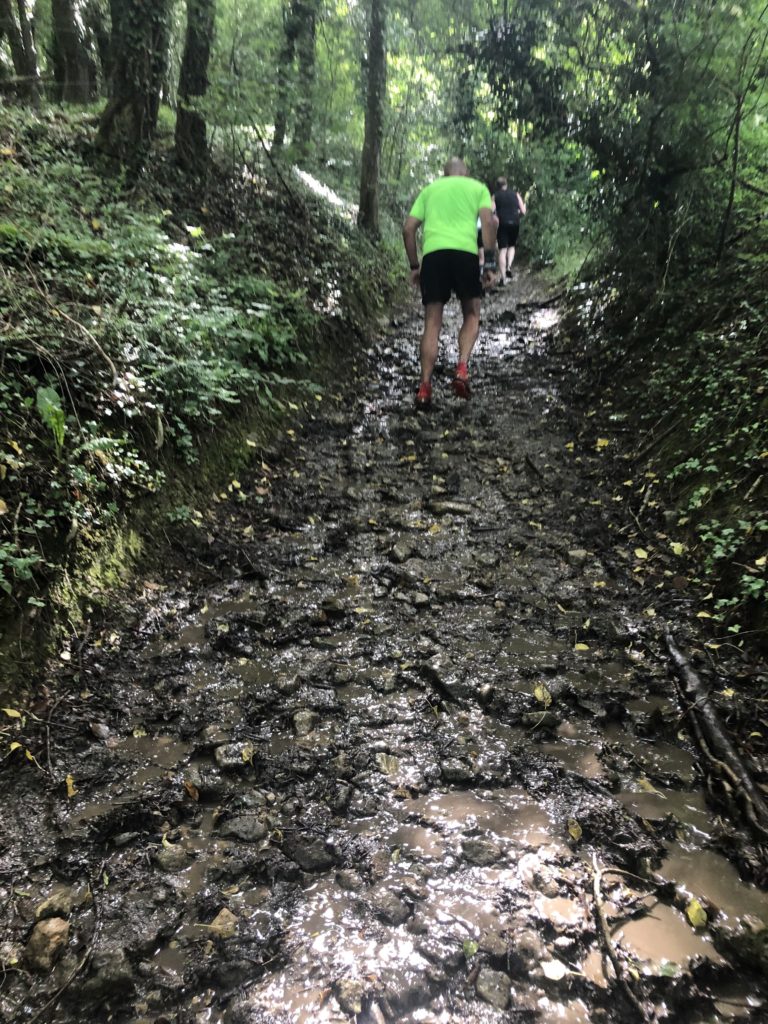 It was steep. Very steep. And very narrow. And very wet.

We ran for quite a while, but I got to the point where I couldn’t run any more, so I started to walk. My husband kept running, but in the end he couldn’t run any further either. Everyone was walking. And it was getting steeper and steeper. And wetter and wetter. And more and more uneven. 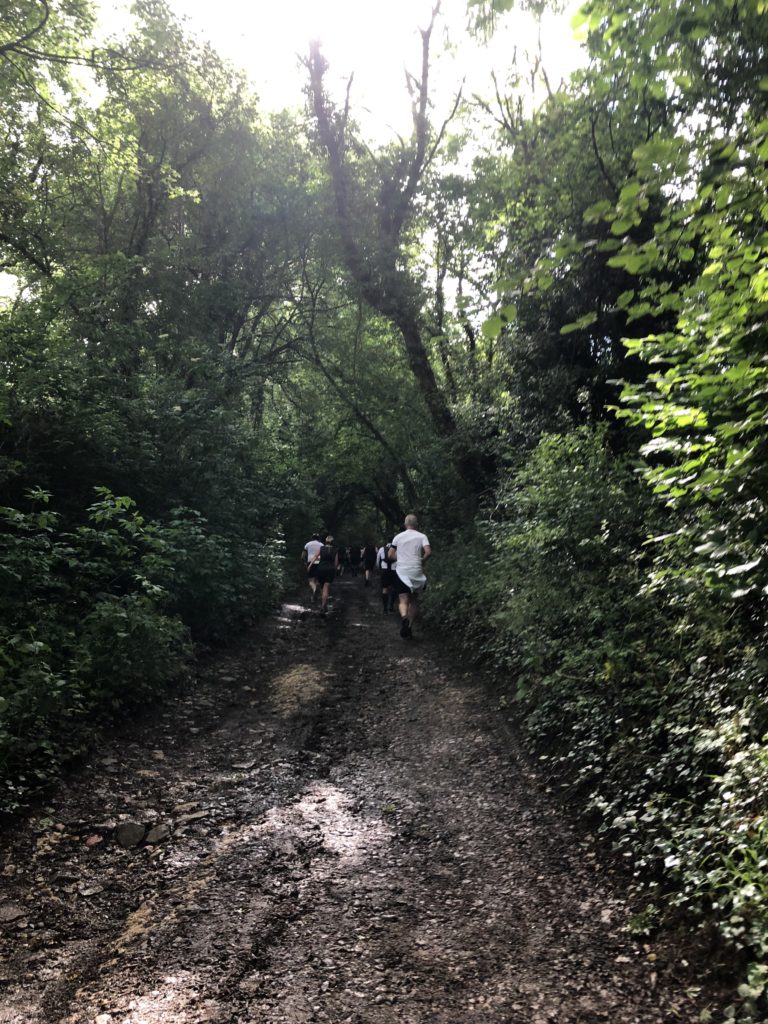 After all the rain, there was a muddy and rather smelly stream pouring down it. And the only way to get up the hill was to walk through it. That hill went on forever. Everyone was chatting as they went up and I just had constant involuntary swear words going through my head ‘f*ck, sh*t, f*ck, sh*t’.

Then we got out into the open countryside – and we were still going uphill! 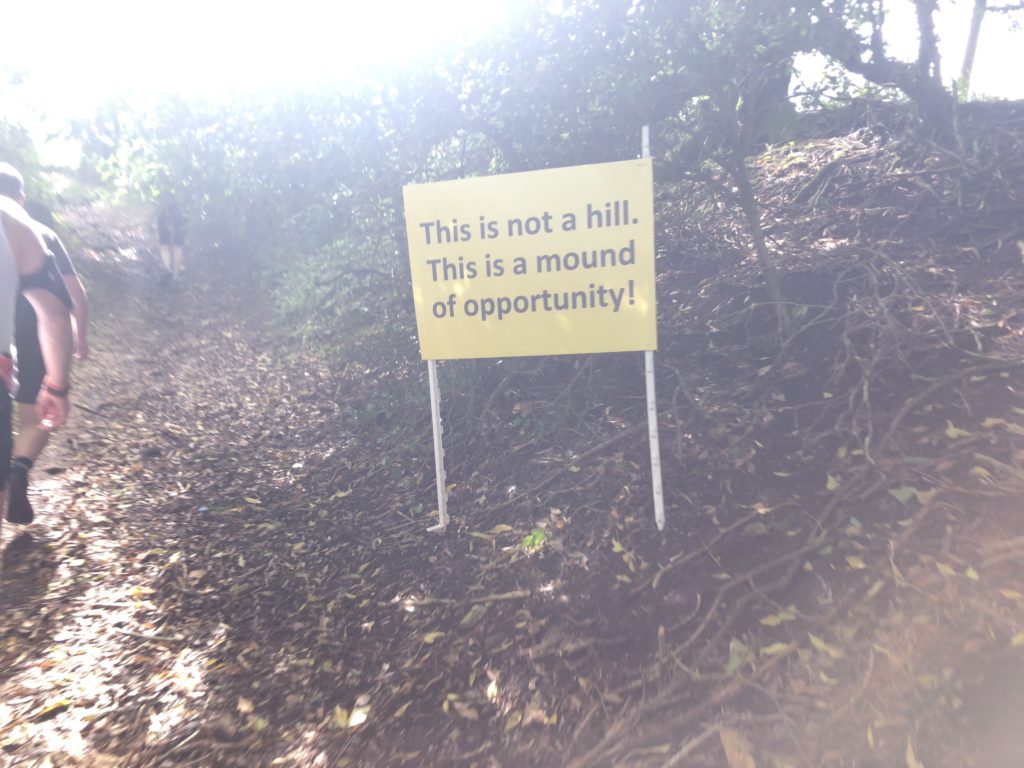 The sun was shining brightly and we were by the three ‘pylons’. They’re not really pylons, but that’s what everyone calls them. They’re kind of iconic in Gloucestershire because you can see them from miles away. I have no idea how we ended up there.

We were running on top of the world, the views were stunning and I was feeling on top of the world too. Why would anyone hate this run? The hill went down a bit and up a bit. We could see the whole of Cheltenham below us and the racecourse didn’t look far away at all. But it was four tough miles. Black clouds rolled over and suddenly we had icy, torrential rain and strong winds. Five minutes later, the sun was out again. 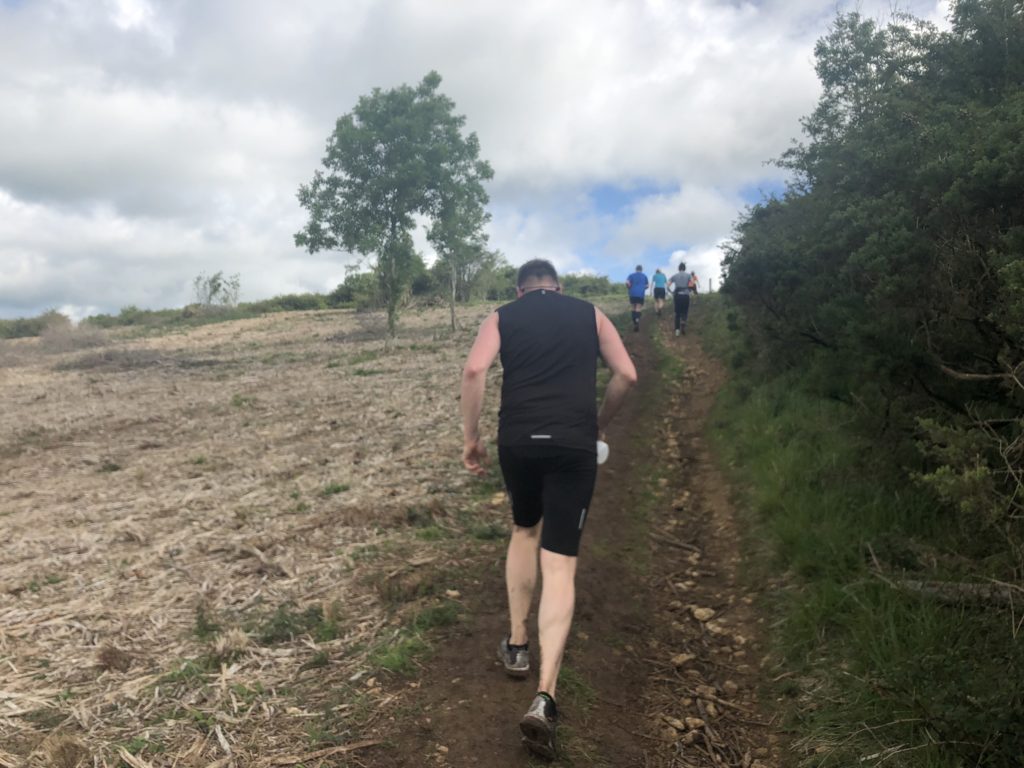 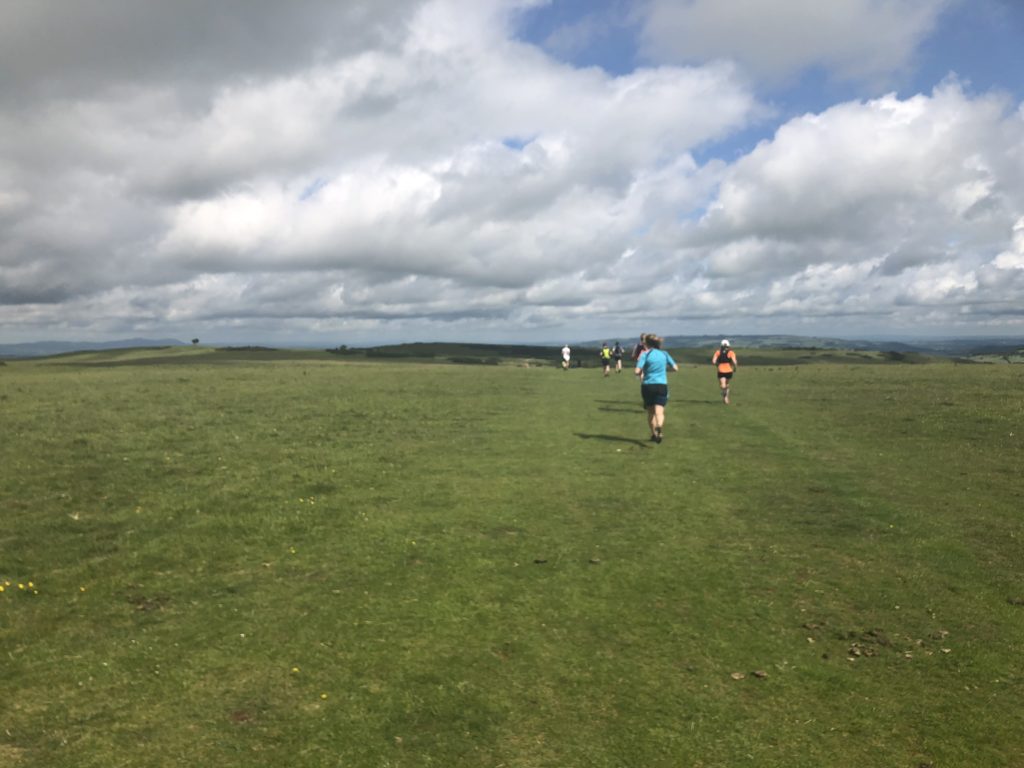 We went down a steep bit of hill in the open and then it got really tough. We were on a very narrow and very muddy path, with trees all around us. There was literally nothing but mud and we were slipping all over the place, grabbing branches and struggling to keep upright. Someone fell just in front of us. Just like the long uphill, this seemed to go on forever. At one point, there was barbed wire on one side and thick stinging nettles on the other, with just a very narrow, very slippy path to run (or walk) along.

And suddenly we were back into the light and civilisation! Just a busy road to cross and we were into the village of Southam. Then we were out of it again and back on another country trail, but at least this one was flat. We passed through some of the trail we’d previously covered in Prestbury and then we were at 12 miles and on the perimeter of the racecourse. All we had to do was run round the racecourse and make it to the finish line. 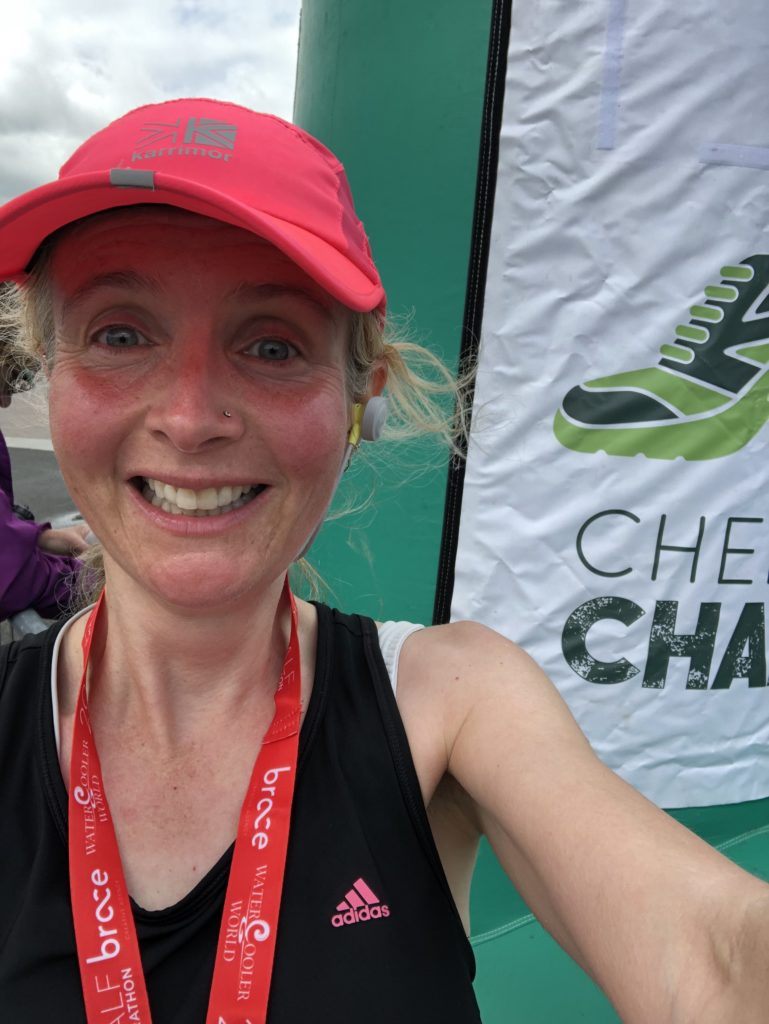 The adrenaline of the treacherous bits had worn off and my legs just felt solid and heavy. Then Cheltenham Challenge’s final joke at the end – two more hills on the actual racecourse site before we crossed the finish line.

I absolutely loved Cheltenham Challenge half marathon. It was hard, but I would definitely do it again. 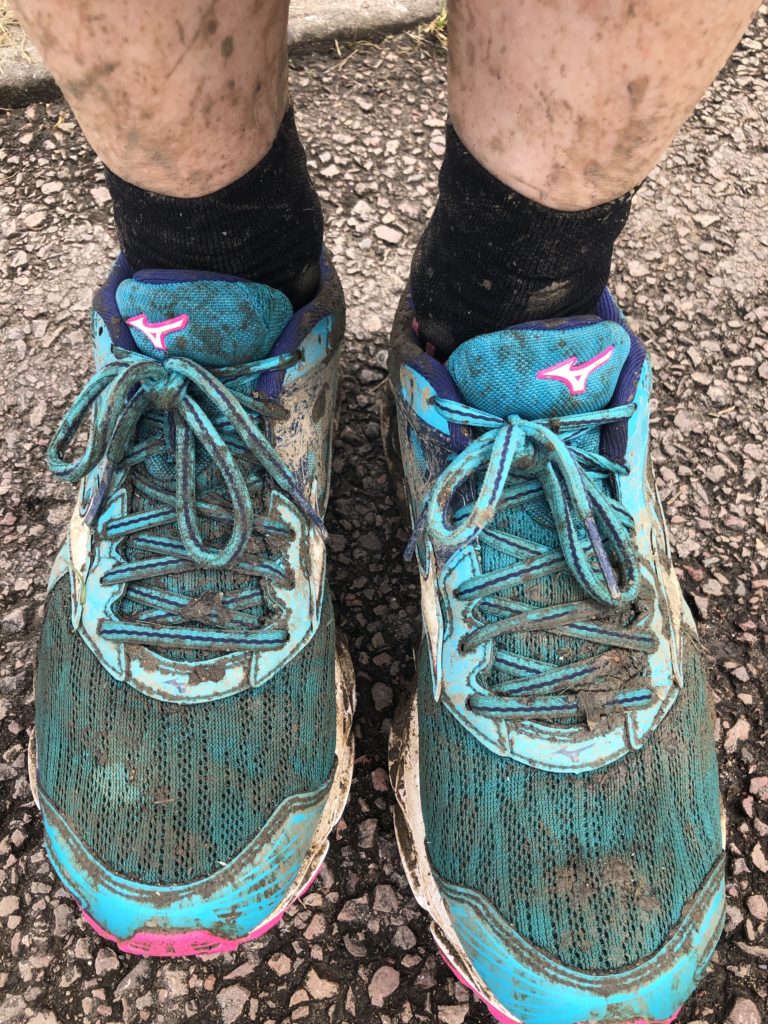