Forest of Dean half marathon

Home » Forest of Dean half marathon

After a cancellation caused by ridiculous weather and much worrying about the clash with my son’s rugby tournament the day of the Forest of Dean half marathon dawned. Cold and icy with just a little promise of some sun later (the temperatures had risen to a heady 10 whole degrees the day before and bees had been sighted in my garden).

Having learnt my lesson from the Bristol half marathon I set off bright and early. No getting stuck behind fat fairies for me this time! I realised as I was driving that I’ve never driven myself anywhere on a Sunday morning before. Yes, I live a sheltered life.

The car park was awesome. It was right at the start line. There was toilets there. There was nothing to pay, nowhere to walk. This made the Forest of Dean half marathon SO much better than Bath and Bristol. At this point at least.

I was standing around and a woman in her 50s approached me.

The woman’s daughter and her best friend were supposed to be running the race and had foolishly run the course when it had been cancelled two weeks previously. In snow and ice. The woman’s daughter had got injured and her friend had to run the race on her own. She was, as the woman said ‘Excuse my French, shit scared.’

Now I’m not sure what she was scared of, but it was her first race and she was used to training with her friend. It was nice to have someone to chat to, to be honest, but I wasn’t sure about running with someone. I train on my own and I race on my own. At 9.30 I suggested we go to the start line, having learned the hard way at Bristol how important this was. There was nobody there. 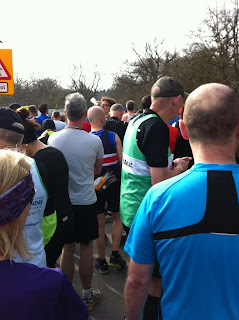 The start line. When some more people had turned up

It was freezing. My feet were like blocks of ice and I was shivering. I couldn’t believe I’d considered leaving my fleecy headband, my gloves and my running coat behind. Then the faintest glimmer of hazy sun. Maybe I would need to get shot of them after all.

The race started and we ran. About three quarters of a mile down the road and then into the forest down a steep slope. I felt my running partner was possibly going a bit fast for me. Which I didn’t like to admit to myself, seeing as she was new to running and had never done a race before and didn’t like running long distances in training. Down the steep hill a few people took the opportunity to go really fast while they could and shave a few seconds off their time. My running partner pulled away from me. Soon she was gone.

I was on my own. Me, the forest and my music. (And lots of other people running around me, of course.)

By this point I’d removed the gloves, then the fleecy headband and finally the coat. As I ran, I’d juggled the coat and unpinned my race number to pin it back on my top. Yet the puddles were still frozen. For 3 or 4 miles I’d obsessively pulled at the wire to my headphones as it didn’t seem to reach my ears properly – tangled round the coat I’d wrapped round my waist.

The running surface was not what I was used to at all – uneven forest cyclepaths with chunky stones sticking up all over the place. An ankle injury waiting to happen. I stumbled over one and nearly fell. At one point my running felt strange. It took me 3 or 4 paces to realise what the problem was – a massive great stone wedged in the sole of my trainer. So my trainer came off for stone removal…

When I run, I like to run. I don’t like to walk. In the Bristol half marathon there a few short, steep hills towards the end and I found I came into my own here – I had the energy to power up them and past other less fit people. In the Forest of Dean, not so much. I walked at four miles up a ridiculously steep, long hill. A mile or two later and another really steep flipping hill. Everyone was walking. My time must have been awful…

A woman came up behind me. ‘This is the hardest half I’ve ever done,’ she said. ‘I was just thinking the same,’ I agreed. To be honest, I was hating every second of it and just wanted it over. And there was a really long way still to go…

Then I passed 6 miles and 7… There’s something psychological for me about passing 6 and 7. I’m halfway! I can do it! (Of course I can do it – how many times have I done this distance before?)

At 9 miles I was literally smiling. Really smiling. My head was up and I felt positive. I was nearing the end.

I observed some of my fellow runners. Like the young woman who was keeping pace with me by sprinting and walking. Why was she doing that? Was it her technique or was she fighting injury? I overtook her, she overtook me. And how was that overweight older woman with the tats (I said tats!) out for the lads beating me?! And the young woman with the blue rowing Tshirt who was just in front of me yet I could never quite catch her…

I wasn’t smiling so much at 11 miles. There was another killer hill and I was forced to walk again. My brain was fighting my legs, trying to resist, but in the end I couldn’t do it. I HAD to walk.

12 miles. We were thinned out enough for the crowd to shout individual words of encouragement to us.

‘Good girl,’ shouted a woman only slightly older than me. Nobody has said ‘good girl’ to me since I was in labour with my eldest nearly 12 years ago. But it cheered me up and spurred me on.

Then the most beautiful sight. No, not the finish line. My car. In the car park. It sticks out like a yellow sore thumb.

I crossed the line in 2 hours and 12 seconds. That’s precisely one second LESS than Bristol, fact fans. I’m nothing if not consistent.

I’ll be honest, I shed a little tear. It was SUCH a hard race and I was expecting at least 15 minutes more than that. I couldn’t believe I’d managed that time. And I was there all alone with nobody to meet me and say well done. 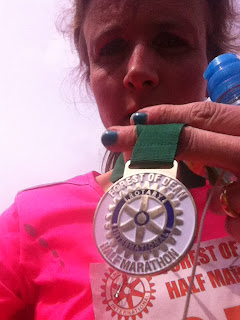 I wolfed down the free cereal bar and had a swig of free raspberry Lucozade (gross), jumped in my car and drove home.

PS My son’s team came 4th in the rugby (the lowest they could have come as this was the semi-finals and finals) and he was substitute most of the time. I am so glad I did my half marathon.