I ran Race for Life!

When I signed up for Race for Life it seemed like no big deal. It’s 10k aka six miles. I run half marathons. I can run 10k with my eyes shut, if you know what I mean (it might be a bit dangerous, but you get my drift).

So it was no big deal until we entered our first heatwave in ages. It was going to be 27 degrees. This is Britain in July! It’s supposed to be 18 degrees, like it has been every year since 2007. I started feeling rather nervous. I like a warm, sunny day as much as the next person, but I’m not a sun worshiping, heat-seeking type. Twenty seven degrees is too much for me, even sat in the garden doing nothing.

I got out of the car and headed for the start line. It was too hot to be outside, too hot for walking. How on earth was I going to RUN?!

I met up with Emma aka Crazy with twins. It was Emma who first inspired me to run Race for Life and whose name I had on my back. I also had the father-in-law I never knew, who I have been thinking about a lot recently. I am very lucky that my life hasn’t been touched by cancer any more than this, but I am also aware that this could change at any time. There are many other people out there who would have thought that, until a parent, sibling, spouse or even child got hit by the dreaded C word. 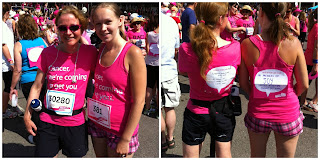 People were warming up and doing the ‘cancer slam’ – a special dance for Race for Life. It is practically against my religion not to throw myself enthusiastically into any dance routine going, but preserving my energy was way too important.

The ladies and girls were split into runners, joggers and walkers. All of the runners were together, whether 5k or 10k.

We set off and one girl got off at an astounding pace. She was either a proper athlete or bonkers. She may also have been doing the 5k with less need to preserve her energy. Despite being with the runners, I still got caught behind a couple of larger ladies who clearly weren’t there to run. Within two minutes some of the runners, mainly teenage girls, were walking. And I was in about 30th place out of a huge field of people.

At 1k I felt great. The heat wasn’t a problem. At 2k I wasn’t feeling as good, it was starting to get to me. But I had 700ml of Lucozade to get me through! I’d be fine.

At 3k I was really starting to think about walking, but it was mind over matter. At 4k, the 5k runners headed towards the finish line and the 10k runners ran up a hill. I gave up. I walked.

At this point it felt like the most horrific thing I’d ever done. I was so hot, so tired, my mouth felt thick and sticky, I couldn’t quench my thirst. Should I take my Race for Life Tshirt off and just run in my sports bra? If it hadn’t been for the lack of factor 50 on that part of my body, I might just have done it. I needed to survive. I didn’t need to be dignified (thank goodness I’d worn proper shorts too, despite the fact that my next waxing appointment is only a few days away!).

I felt quite sick. I wouldn’t be able to eat when I finished. I could hardly drink. I would have to go home to a freezing cold shower, then lie in a darkened room all day. I’d be too ill for work tomorrow. I definitely had heat stroke.

I was convinced I was at 6k just after the 5k marker, so the 6k sign when it came was a huge disappointment. Between 4k and 9k I walked as much as I ran. To be honest, I felt worse when I was walking than when I was running, but I’d get to a point with the running when I knew I just couldn’t run any further.

In the distance I could see a great sea of pink still walking around the track at the racecourse. There were far more of them than there were of us – 10k runners heading for the finish line.

At 9k, the 10k people merged with the 5k people, and something kicked in for me. I wasn’t going to be slowed down by the pink wigs and the toddlers and the dogs. I’m a runner, and I was going to run!

As a rule of thumb, I say 6 miles takes me 60 minutes, although in reality it’s more like 55. I crossed the line, in that ridiculous 27 degree heat and beating sun in 1 hour and 1 minute. And I was VERY happy with that.

I heard Emma call me as I headed for the line, then my eldest as I crossed it. My kids were proud of me. And I was proud of myself! It had been so much harder that the half marathons I’d done, and I’d felt so awful for much of the race, but I’d kept going and I’d done it! 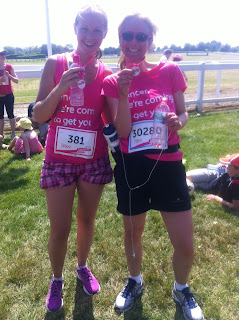 And what of the legendary Race for Life emotion? The sad messages on people’s backs and the tears? I’ll be honest, I didn’t feel much of it. There were some sad ones, particularly those which included messages as well as just a name. The messages from younger people who’d lost a parent or a sibling and anyone who’d lost a child were heartbreaking. I guess most of the emotional bit was among the walkers, who walked in family groups or groups of friends to remember one or two special people. A lot of the 10k runners were just running – they didn’t even have a name on their back.

I feel pleased that I’ve done it and I’ve raised some money for Cancer Research. I’m so grateful to everyone who has sponsored me. Oh, and I didn’t need that lie down in the darkened room or that day off work.