My GP recently recommended that I move to an HRT patch rather than take HRT tablets. You can read more about that here.

So what is it like using an HRT patch?

An HRT patch is like a large plaster. It is completely clear, so not very visible. It should be applied to a fairly small area of the body around the bum and hips, so shouldn’t show through your clothes anyway. The leaflet makes it very clear that it should be in this area, then reiterates that it shouldn’t be on or near the breasts. Really?! Would anyone be that stupid that they would put it on their breasts, having been told that it should go on the thighs or bum?

It also says it should be on a ‘hair free’ area of the body, which is free from cuts and spots, and that you shouldn’t keep putting your patch on the same area.

I didn’t apply it perfectly. It had a few creases. Oh, and there are strict instructions not to get it under the elastic of your clothes. So I carefully avoided the waistband of my knickers.

I forgot the minor detail that knickers also have elastic at the top of the legs. Needless to say, the patch sat perfectly under the elastic I was supposed to be avoiding.

Should I take it off and start again? How serious was it that it was under the elastic? I tried googling, but apparently my request was too niche even for the entire internet. So I decided to stick it out.

For the first couple of hours, my bum ached, increasing my anxiety about my knicker elastic fail. I now think it was probably psychological. Most of the time I was unaware of it, but I occasionally had the feeling that there was a wrapper in my back pocket that needed throwing away.

Patch number 2 went on my thigh. No elastic. No creases. No weird feeling of a wrapper in my pocket. Win! But when I took it off there were four small spots or cuts on my leg, that I’m sure weren’t there before.

Patch number 3 went on my other thigh. For some reason, it only lasted two days and came off after a shower. To be fair, I’d run 18 miles in the space of 48 hours, as well as having three showers in that time. Maybe HRT patches aren’t designed for runners?

You wear two patches a week and the booklet in the package gives you instructions on when to change them. You have regular days, so you wear one patch for three days and one for four days. Luckily patch number 3 was a ‘three day patch’, so I decided to just go without for a day rather than start messing around with my days.

By this point I had three sticky marks on my body that were impossible to remove. There is definitely no risk of putting the patch back in the same place because the stickiness takes forever to come off. I suppose nail varnish remover would help, but I’m not really up for sticking nail varnish on my body.

The good news is that I’ve had no side effects from the patches and my night sweats are completely gone. I don’t like to speak too soon, but I may even be sleeping a bit better…

Update September 2021: After three summers of using HRT patches, I can confirm that they really aren’t suitable for runners, at least in summer. I’m not sure whether it’s down to sweat, the movement of my legs, rubbing on my shorts or a combination of all three. But I do lose a lot of patches early in summer.

So it’s not unusual for me to wear a patch for five days out of seven in summer, but it doesn’t seem to affect me adversely. Normal service should be resumed any day now, which will last until around May or June next year.

If you are a runner, you may choose to use the gel instead of the patches. 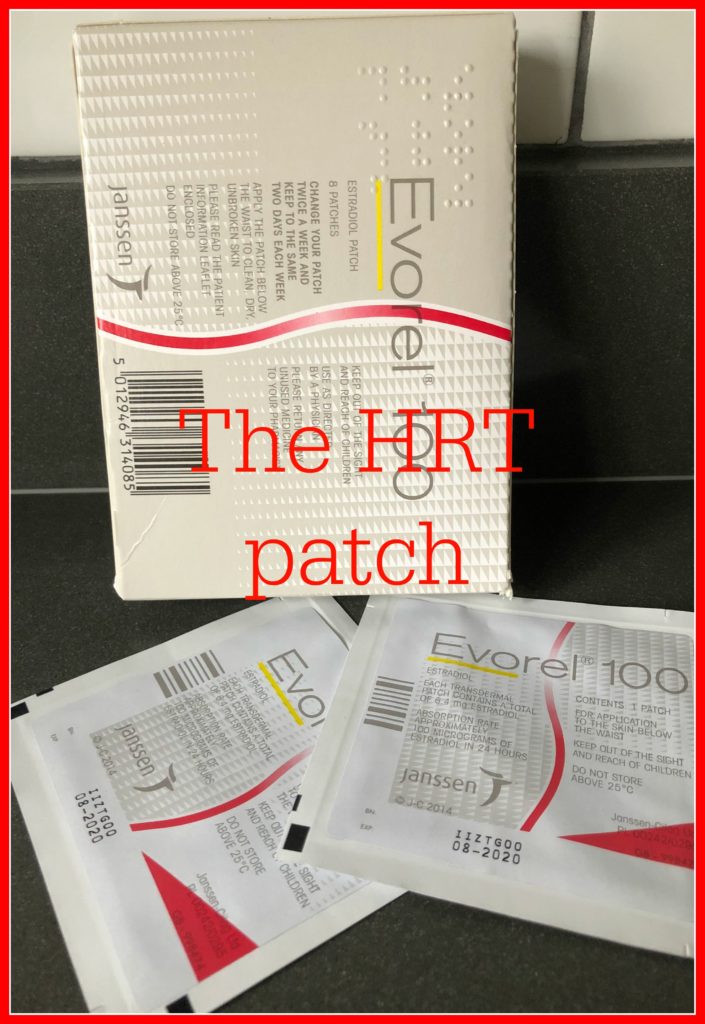