During the winter, I tried out various different possible fuels for my marathon. I’d never had anything other than a drink with me on a run before, but 26 miles burns 2600 calories, so it was essential that I learned to eat something while running. As an IBS sufferer, I have to be extra careful (although apparently 60% of long distance runners do have some stomach/ toilet trouble) and I felt that gels weren’t the way forward.

After trying various different forms of fuel, I settled on a combination of two. Go Bites are all natural and shouldn’t cause any problems for my stomach. Clif Bloks are a specific energy sweet, so slightly more likely to cause stomach trouble (my husband also had a headache from eating too many of them on Stroud half marathon), but are good for an energy boost.

During my early runs, I learned to eat while running, which was tricky at first (there were a few uncontrolled coughing fits when something went down the wrong way). I initially took on fuel every three miles, which is every 30 minutes at my marathon pace. A Go Bite contains 44 calories, so I was burning up 300 calories and taking on 44. You don’t have to be a genius to work out that isn’t really enough.

So once I got beyond half marathon distance in training, I increased my fuelling to every two miles after six miles – so I eat something at three miles, six miles and then eight miles, 10 miles etc. I also decided to go heavier on the Go Bites (slower release energy) earlier on and heavier on the Clif Bloks later on, while still getting some balance. So I would eat Go Bites for my first two fuel breaks (not actually a break, as I’m still running), then a Clif Blok on my third fuel break. Later in the run I would take two Clif Bloks to every Go Bite, to give me more of a boost in energy.

Then on my first 18 mile training run, I decided to try fuelling every two miles right from the start. I’m pleased to say that I suffered no ill effects. This also meant I was drinking more often, which is definitely a good thing. As my marathon is in May, I know the weather could be very hot.

Clif Bloks are supposed to be eaten with water. Go Bites don’t have to be, but they go down better with a drink. I carry a bottle of Lucozade Sport Light with me (tastes nice, but too low in calories). Sometimes I miscalculate and don’t drink enough of it because I’m trying too hard not to drink too much early on. Once I got to 18 miles in training, I increased it to two bottles on a run.

On the day, I will take more fuel with me than I plan to use. Just in case. I don’t want to end up in a situation where I’m completely sapped of energy and I’ve got no way of taking any more on board. So if I need to fuel more regularly or have twice as much, I can do that. Ideally, I want everything to go to plan, because every time I change something, I’m risking having problems with my stomach. There are so many unknowns and I could probably plan forever and there would still be the potential for things to go wrong. But all I can do is plan as much as possible and hope for the best! 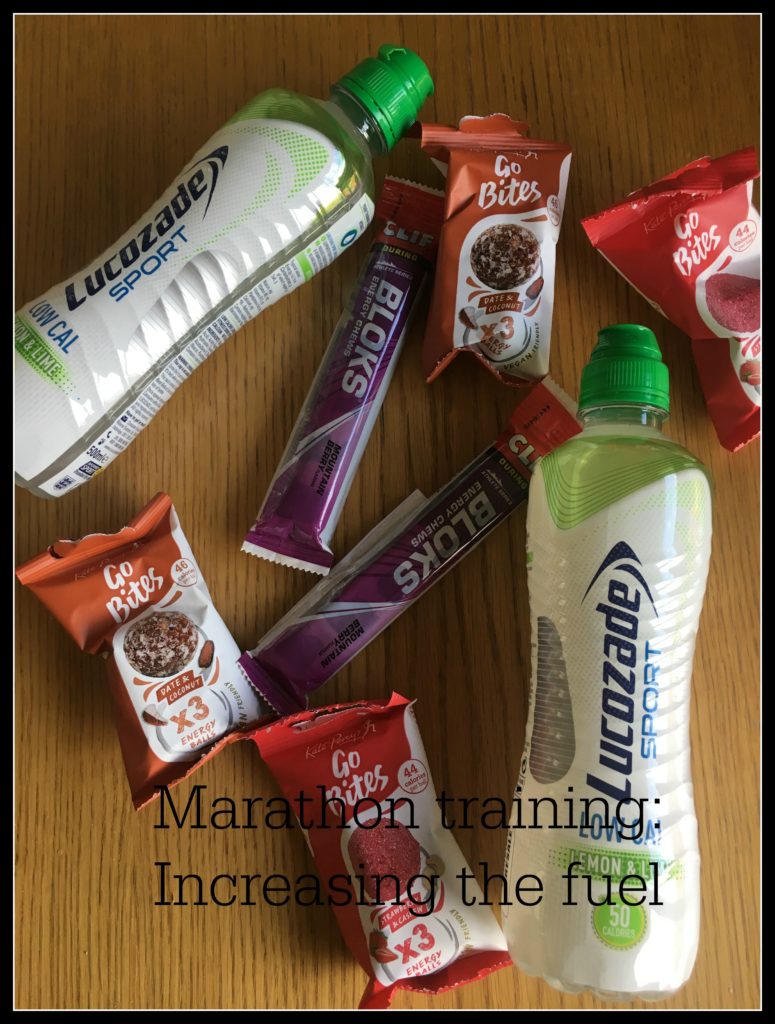