How did my final weeks of marathon training going? Weeks 12 to 15 took me from my longest training run, through tapering right to the big day!

The week started with a ’60 minute light run’, which is six miles to me. I dutifully did my body conditioning, and I realised that it hasn’t affected my running the next day for about three weeks now, so that’s real progress! (I still hate it though.) Then I had a 30 minute intense run on Thursday and a five mile light run on Friday, which I ran at my marathon pace of 10 minute miles. Saturday was only a 20 minute light run on the plan. As parkrun is either a 30 minute light run or a 23 minute very fast run, I couldn’t do parkrun. So I did a two mile run on my own, then volunteered at parkrun. Volunteering at parkrun is something I should do more of, although I do more than my family, who have never done it!

I ended the week with the longest run on my training plan – 22 miles. My husband had to give up at seven miles as he had hurt his knee, and I just kept going. It wasn’t easy, but it wasn’t too hard either. I’m confident that I will manage 26 miles and be able to run it all the way.

I started week 13 with the standard ’60 minute light run’ aka six miles. Things were slightly different in the middle of the week, as we went away to Padstow for two days. I actually skipped the body conditioning completely! It’s the first time I’ve missed it and I’m sure it won’t do me any harm. Thursday was a 45 minute ‘intense run’, which I think is the longest intense run I’ve done. I found a fairly flat route along the main road through Rock and just ran up and down there for five miles. As I was staying in a hotel, I actually had to run before breakfast. I haven’t run on an empty stomach since before I had the kids, but it was fine.

Running (and walking the South West Coast Path) in Cornwall took its toll on my legs a bit. They felt very stiff for Friday’s seven mile ‘steady run’ – I interpret that as nine minute miles. Saturday was supposed to be a ’45 minute light run’, but I rounded that up to 50 minutes, because that’s five miles – parkrun, plus two miles. As I’m now tapering, I ended the week with a 12 mile run. After all the long runs I’ve been doing, it felt like a walk in the park. It was my first run in heat this year and I tried wearing a hat – in case I need one on the big day.

I decided for week 14 that I would do all of my runs, apart from my intense run (interval training) with a full belt, so I get used to the weight I will be carrying at Newport on 5th May. For the third consecutive week, I started the week with the ’60 minute light run’, which is six miles at 10 minute/ mile pace. After skipping body conditioning last week and feeling no ill effects from it, the urge to miss it this week was almost overwhelming, especially as I had a bad cold. I ended up compromising by doing 30 minutes.

Thursday was supposed to be a 40 minute tempo run, but I didn’t feel up to it with my cold. I considered just doing a four mile slow run, then decided it would be far better for my health not to run at all. That is not a decision I take lightly! I managed my six mile run on Friday, a parkrun on Saturday and 10 miles on Sunday, despite the fact that I was pretty sure I had an ear infection by that point.

Week 15 is marathon week – and rest week! All I had on the plan was a three mile run for Tuesday and a two mile run for Thursday. I didn’t even have any body conditioning to do. I concentrated on a healthy, balanced diet, increasing the carbs later in the week, but without forgetting fruit, veg and protein.

The plan suggested a ‘short light jog’ for Saturday. But how short is short? Half a mile? A mile? I opted instead to volunteer as tail walker at parkrun – which means you cross the line last and walk at the pace of the slowest person.

Week 15 ended with Newport marathon itself. You can read all about that here. 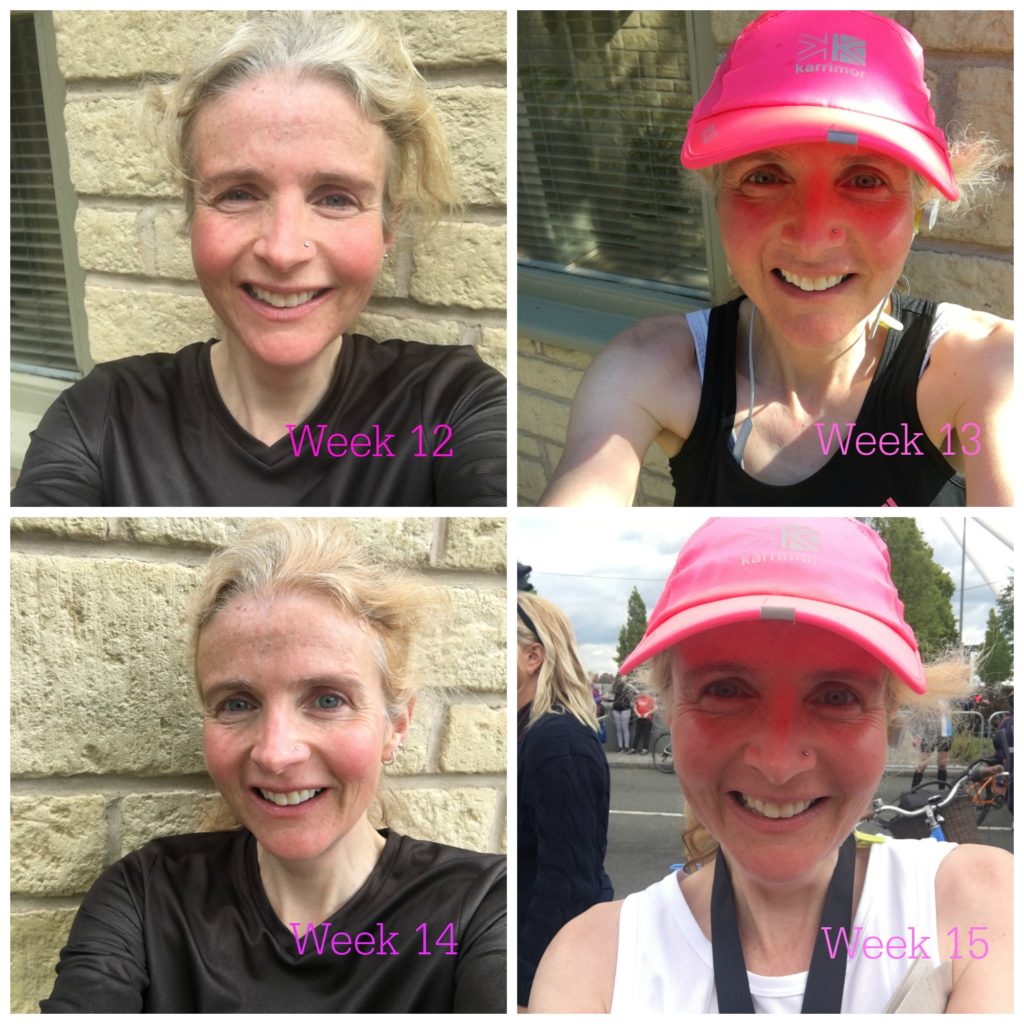 I’m really pleased with how my marathon training has gone over the last 15 weeks. During that time, I have run 67 times, and covered a total of 440 miles. I have really stuck to my plan, I haven’t found it too hard and I’ve actually really enjoyed it. In all that time, I think I’ve only skipped two runs – one because I was ill last week and one because I went to Alton Towers with my daughter.