It’s not many years ago that I was the only runner in our family, but, thanks to parkrun, the running bug has really spread. So for Cheltenham half marathon 2018 we had four of us running – my husband, my brother-in-law, myself and my son! 17 is the minimum age for running a half marathon and my son only turned 17 three months ago, so I was very proud to have him there.

It’s illogical, but a race always makes me feel nervous – and I know most people are just the same. I woke at 4.30am on half marathon day, which actually wasn’t too bad. I’d been waking at that time all week anyway, and have been known to wake as early as 3.30 on a race day! I got up at 5.30 and had my breakfast, then delivered my son some toast in bed, which he ate and went straight back to sleep.

It’s remarkable how quick the time goes and, before I knew it, my dad was round to give us all a lift. The traffic was heavy, so we jumped out a bit early and walked the last half a mile. A walk is good for warming up the muscles. Although the weather was rather cold and we were dressed in shorts and vests. Once at the racecourse, I queued for the toilet, then queued for it again almost immediately!

My husband and brother-in-law decided to go in the ‘Sub 1:45’ pen. I thought my brother-in-law might achieve that, having run 1:45 at Tewkesbury. I suspected my husband was going to get his PB, having trained much better than for any previous half marathon, but didn’t think he would get sub-1:45. My son and I definitely weren’t going to get sub 1:45, so we went in the ‘Sub 2 hours’ pen. I wasn’t expecting another PB as I’ve been a regular runner for year and I’m not improving at the rate my husband and brother-in-law are. My son had been pretty slow in training, so I was predicting 2:10 for him.

It was a slow start and the sub-1:45 pen got away a long time before us. I soon picked up speed going down the hill and said goodbye and good luck to my son. I was running at well below eight minute miles as I ran into Prestbury. I missed the 1 mile marker. I’m not sure if that was because I wasn’t looking out for it or if it wasn’t very visible. 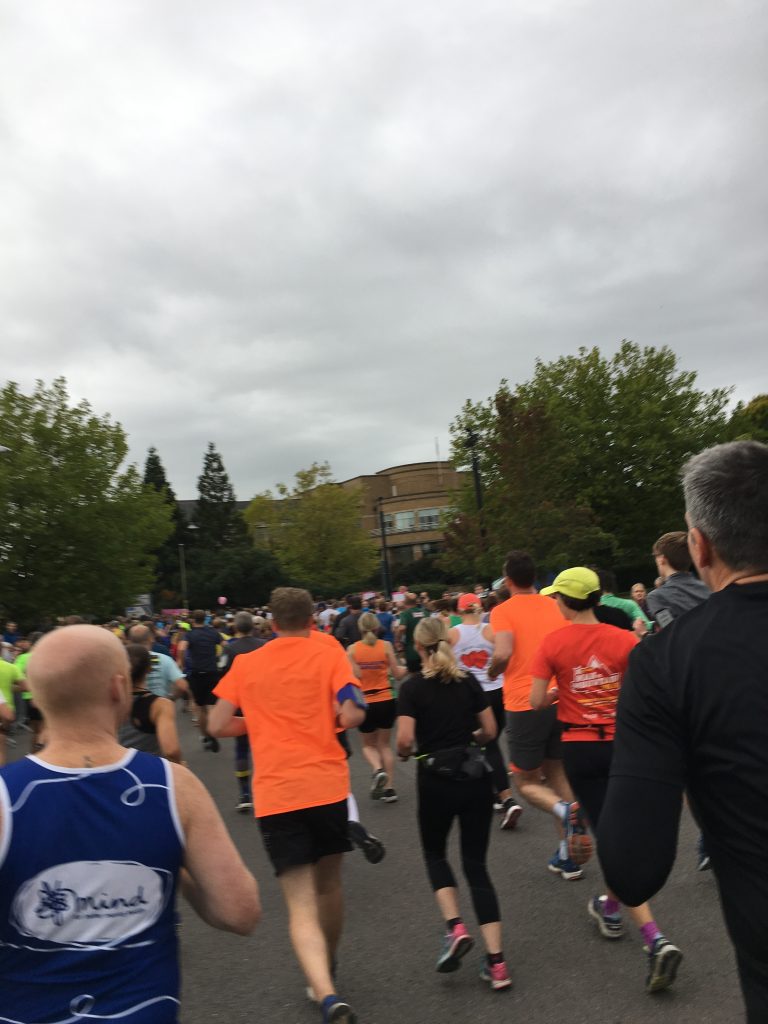 It wasn’t long before we were heading into the town centre and up the beautiful into Montpellier. I managed to miss the 2 and 3 mile markers too. There was a bit of a hill close to the hospital that I’d never even noticed was a hill before (in one of the previous incarnations of the route we ran in the opposite direction down that road). Heading onto Lansdown Road and into Hatherley, we saw the faster runners already running back the other way. I caught up with my husband’s colleague and had a chat before leaving him behind, then I caught up with a friend and had a quick chat before leaving him behind too. Then I was the ‘fast’ one as the slower runners entered the Hatherley area.

I grabbed some water as I ran back down the Promenade, even though it was so cold I barely needed it. The weather stayed cloudy and cool all the way through, which is unheard of. During a run, the sun usually comes out or it starts to rain a bit, but it didn’t change at all. It was nice not to deal with sweaty hands or hair flying into my face, two things that always drive me mad.

I finally saw a mile marker at mile 7. Funnily enough, I saw all of them after that, was I getting desperate in the second half of the race? I headed onto the Honeybourne Line, a footpath and cycle path on a former railway line, and found the bridge to be rather steep. I was aware that I was still running pretty quickly.

Pittville is a beautiful area of Cheltenham, but I can’t help feeling that the organisers milk it a bit. It’s very close to the finish line, but you arrive there at around eight miles and basically spend the rest of the race weaving backwards and forwards around it. At this point, I felt a twinge on the inside of my right ankle close to my foot that I have literally never felt in my life before.

It was lovely to see my kids, my parents, my sister and niece and nephew as I ran into the racecourse (not to mention the various people I know who shouted my name along the course). But anyone who has ever run the Cheltenham half marathon will tell you that the racecourse is the absolute worst bit. It’s great for horse racing, but flipping boring and soul destroying to run around, when you can see runners miles away in every direction. The organisers tried to make it less boring this year with a couple of bands and I tried to keep a positive mental attitude. It’s just over two miles and by this point I knew I was on for a PB, which always helps!

I sprinted for the finish, as well as a person who has run 13 miles can sprint, and crossed the line in 1:48:10 – a minute and 23 seconds faster than my PB set at Tewkesbury in May and nearly four minutes quicker than my best time at Cheltenham, set in 2014. I was very pleased to be 12th in my age category. The first person I saw was my friend Joy aka Pink Oddy, who was handing out medals and happy to give me a hug, even though I was sweaty!

My brother-in-law got 1:43 and my husband got 1:46. I had time to get to meet my family to cheer my son as he crossed the line in 1:58. What a fantastic achievement for him and for all of us. There were only a handful of men under the age of 20 in the whole race, so I suspect he may have been the youngest there.

I felt on top of the world for the rest of the day – in my mind, if not in my body.

Now can I beat my PB again at Stroud in three weeks?!

Cheltenham 2018 was my 13th half marathon and my fifth at Cheltenham. 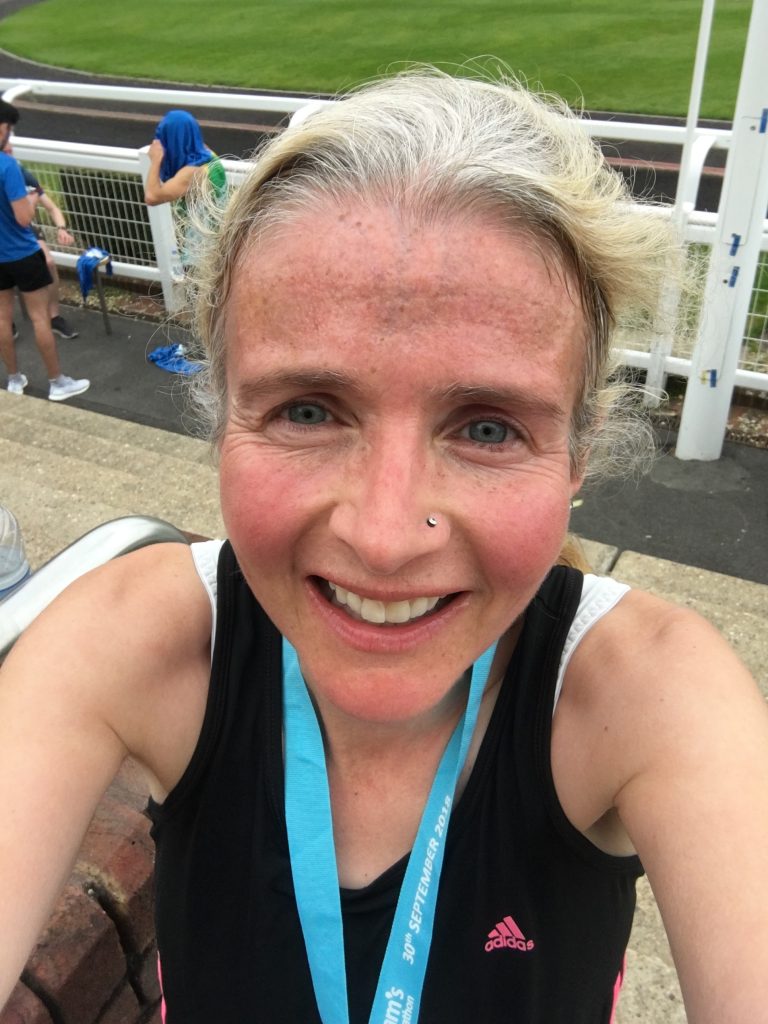