Roaccutane – Where are we now?

Home » Family » Roaccutane – Where are we now?

Regular readers will know that my eldest and I have fought a long, hard battle with our skin in recent years. I went on Roaccutane, the strongest acne drug there is, nearly four years ago. My son went on it in the autumn of 2016.

It’s almost exactly three years since my skin spiralled out of control, leaving me with a face that looked barely human. Looking back, I really don’t know how I coped and how I faced the world, but you do it because you have no choice.

Eighteen months later, it was my son’s turn to watch his skin spiralling out of control. For a teenager, that is very hard to deal with, even though he coped brilliantly. For a parent, that is very hard to watch. You don’t want to see your child suffer, you don’t want to think of him having to put up with nasty comments, but you know children and teenagers can be cruel and you know that is exactly what is happening.

You are supposed to stay on Roaccutane for a few months and in the vast majority of cases, it cures acne completely.

So where are we now?

My son came off it in October last year. His skin was very clear and it still is, pretty much. He gets one or two small blemishes and they do scare me. They’re nothing in teenage terms, but it does worry me that it might be the beginning of him going downhill again.

I would hate him to have to go through that again and hate for him to become too reliant on medication. I am watching his face and neck carefully and hope he would tell me if his chest and back started to go wrong. If he needs more medication, I don’t want to leave it too late and for his skin to get out of control.

As for me, I’m STILL on Roaccutane. I’ve dropped my dose over the last year or so and I’m only on 5mg a day. To put that in perspective, I was on 20mg a day for a long time, and my son was actually on 40mg a day. My skin is completely clear, for the first time since I was at primary school.

When I went to see the dermatologist at the end of last year, he advised me to take Roaccutane every other day. I did this for five weeks. Then I got two spots. Two spots is nothing. Two spots is OK. I can live with two spots. But two spots quickly became four spots. Would it quickly become eight spots, then 16 spots? I couldn’t take the risk. I know how quickly and how badly my skin can change. So I’m back to taking Roaccutane every day.

Will my son’s skin stay clear? Will I ever get off Roaccutane? 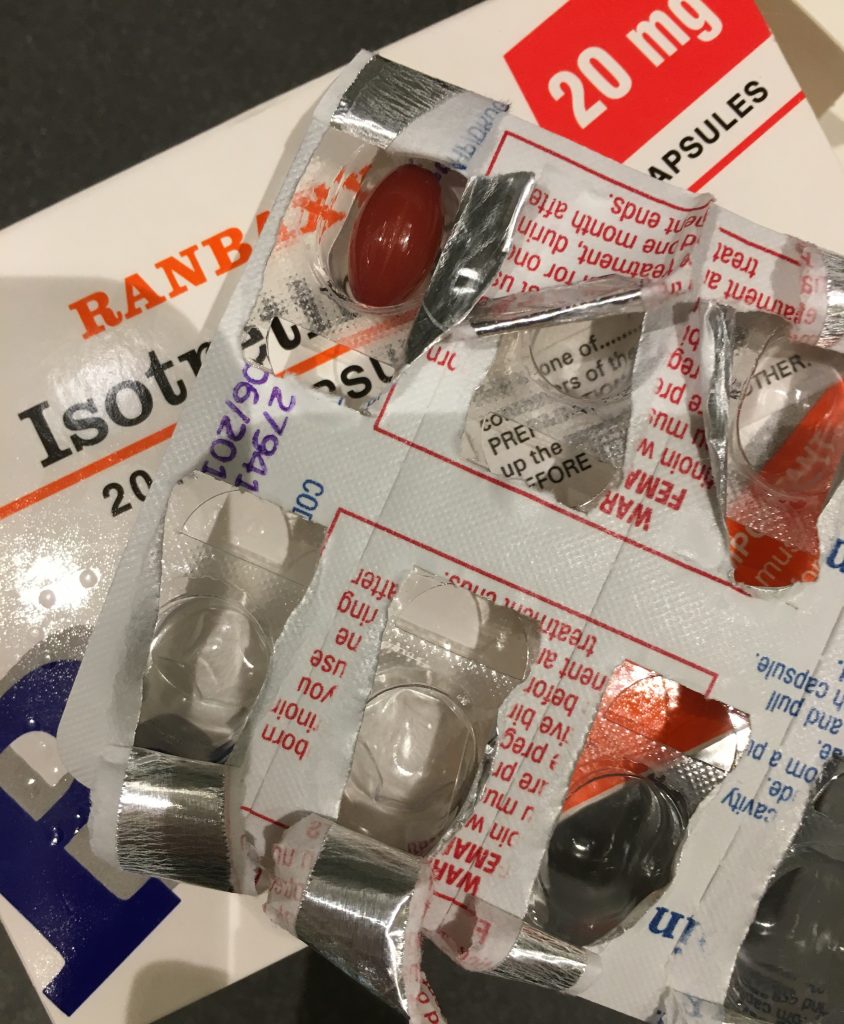