But the weather forecast wasn’t good. Or it was good. Good for days out and sunbathing. Not good for running – bright sunshine and temperatures in the 20s. An email from the half marathon organisers said ‘this isn’t the time for personal bests’. Damn!

The main difference between a race and a training run (apart from the thousands of other runners!) is the wait between leaving the house and actually running – so you have to think a bit more about eating, drinking and going to the toilet. When I train, I will drink almost until I leave the house and will go to the toilet just before I set off.

We parked the car and arrived at the start in good time. There was just one thing to do – go to the toilet. But the queues were SHOCKING. I joined a queue at 8.36am and was still there at 8.57. The race started at 9am. I decided to abandon the toilet trip and get to the start line. I wasn’t sure how I would manage. I don’t normally need a wee as I run, because I’m sweating off liquid, but I was taking a risk. 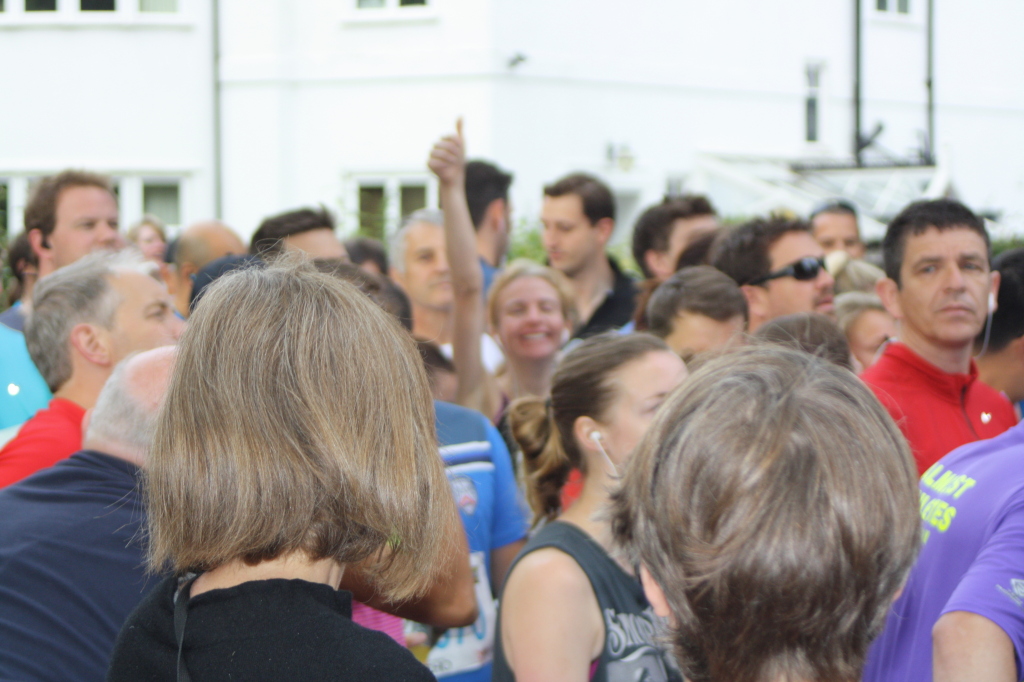 I’m in there somewhere!

I squeezed into the ‘sub 2 hour’ area and moved gradually towards the line. As the clock got to three minutes, I crossed the line and started running. Years ago, when my husband was running half marathons, a friend advised him to start in the area which is slightly faster than you actually expect to go – so if you expect to run in two hours, go in the hour 1 hour 45 section – as it’s easier to be overtaken than to overtake. It seemed like everyone else was following this principle as I was overtaking an awful lot of people. My first five minutes were slower than I would like – running at 8 minutes 40 seconds per mile pace. That’s a good pace to be finishing at, but you don’t want to start at it, as you’re going to slow down. So I picked up the pace and the people started to thin out. I was at the one mile marker before I knew it.

We ran through a council estate, cheered on by families in pyjamas, smoking and drinking mugs of tea. Then it was into the centre of town and we were at the two mile marker in no time. Up a slight hill and out of the town centre into a middle class area – where the spectators were fully dressed and not smoking. The elite runners looped past us ‘normal’ runners, then a mile later we looped round the fun-runners and first-timers, including a friend of mine. Past a boarding school, cheered on by posh kids in onesies and wrapped in blankets. The three mile marker seemed to take a bit longer to come.

It was incredible how quickly the mile markers were appeared. We ran back into town, with crowds cheering all the way. Kids handed out sweets and people took photos. And I just kept overtaking people. My time was good – under 8 minutes 30 per mile. If I could keep it going, I’d be on for the personal best.

We ran through a village and up one of the few hills in the race. I was running behind a woman in a Winston’s Wish vest who I’d been running behind for some time. As I finally passed her on the hill, she said ‘Sarah!’. It was only one of my oldest friends, running her first half marathon and doing a very good time! We had a brief chat, then I ran on a bit. We were nearly at the racecourse.

Cheltenham racecourse is a great place for horse racing (if you like that sort of thing, which I don’t), as well as concerts, festivals and firework displays. But it is not, in my humble opinion, a good place to run races. You cover almost a quarter of the half marathon on Cheltenham racecourse  – from nine miles right until 12 – and it’s a soul-destroying place to run. Everywhere you look there are trails of people, like ants, looping around the course – fast runners leaving the course, slower runners arriving. But when I arrived at the racecourse I saw, in the space of a minute, two families from school and my mum and dad, which put a real smile on my face. It was also the point when the dreaded sun came out and the temperature shot up, just when there was no shade.

I hadn’t seen my husband and daughter at all during the race, despite looking out for them. Halfway round the racecourse, they rang me. They’d kept missing me, but one of the ladies from school had told them she’d seen me and they were waiting ready to cheer me on as I left the racecourse. At 12 miles, just before leaving the racecourse, there is a killer hill. A steep hill, plus heat and bright sunshine and 12 miles under the belt, is not easy. If I’d hit that hill under those conditions at eight miles, I would probably have walked, but it was too close to the end. I had to keep running – even if it was walking pace. I grabbed a bottle of water and poured it on myself. I was dead on my feet by the time I saw my husband and daughter. It was so lovely to see my girl. My husband shouted that he thought I was on for one hour 56, but I thought I was faster.

It was so nearly over – turn left out of the racecourse, down the hill, past Pittville Pump Room, then downhill all the way to the finish line. It’s incredible how far the last 0.1 mile after the 13 mile marker seemed to be. I pushed myself as hard as I could go. I was feeling exhuasted, but I had to do a sprint finish. It looked like I’d done 1 hour 52!

In reality, my time was 1 hour 51 and 55 seconds. I couldn’t believe it. I had come 1,023rd out of 2,944 people taking part and was the 48th woman over 40 to cross the line. For someone who is not a natural athlete, that is a real achievement. I couldn’t believe it. I was so proud I’d smashed my personal best. All the training had really paid off. 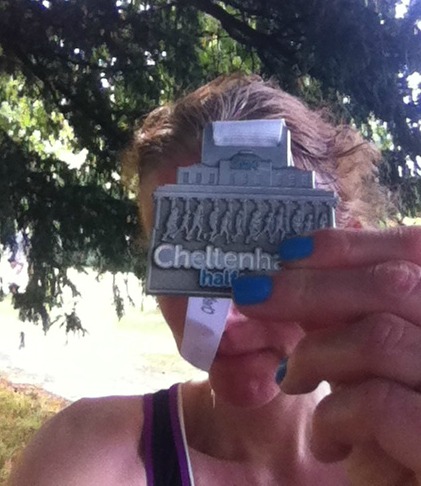