My short-lived festival-going career ended nearly half a life ago. I went to Glastonbury when I was 18 and saw many bands I can’t now remember, apart from The Levellers for the first time (of very many) and PJ Harvey. A year later I went to the Phoenix festival, near Stratford-on-Avon. That festival only survived a year or two and I can’t for the life of me remember who played. That same year I travelled to Belgium on a coach to see The Levellers play a festival. There were lots of other bands on the bill, but the only other band I can remember was Faith No More. I also remember the heat, the dust and the lack of sleep. Fast forward a few years and we went to the very first V Festival, which was in Chelmsford. We mainly went to see Pulp, but my best memory is of theaudience (not a typo), fronted by a very young Sophie Ellis Bextor playing a pink guitar.

And that was it. My festival career.

The Wychwood Festival has been at Cheltenham Racecourse for 10 years. I think it was a few years before I became aware of it – I was too busy at the time having babies to worry about festivals. I knew The Levellers had played there and I knew that I’d sometimes missed the festival because we were on holiday -in Italy  and Barcelona. I’d seen The Levellers were playing again this year and had a vague idea we should go, but in the end it was my mum who suggested it and booked the tickets for us all.

The weather forecasts had been good, but they’d started declining as the week wore on, until we were predicted sunshine and showers all afternoon. So we wore our walking boots for the mud and packed our waterproofs and suncream. In the end, it was warmer than predicted, but without much sun and no rain at all. Pretty much perfect weather, really.

The parking for Wychwood is great. Cheltenham Racecourse is used to dealing with BIG events. Wychwood Festival is a fraction of the size of Gold Cup day, so there is easily enough parking to go around – and you can get to and from your car in a few minutes if you don’t want to carry  everything with you.

I’d heard that Wychwood was a very family-friendly festival, but I couldn’t believe how family-friendly it was. All of the festivals I’d been to before had been geared towards young adults. This was all about the kids. Pretty much everyone there had children with them. There were activities for toddlers and things to keep the bigger kids entertained too. There were bubbles, balloons, crafts and even a Little Tikes play area. It was so family-friendly that Justin Fletcher was first on stage! My sister and brother-in-law took my niece into the crowd to watch. My daughter would have liked to see him, but she was at a dance rehearsal, so I gave him a miss. The boys were typical big boys and complained about how irritating it all was.

We set up our picnic blankets and pop-up tent just away from the main stage, where it was a lot less crowded and a lot less muddy. The kids kept disappearing to look at the various stalls. At first I kept trying to find them, then I gave up. I realised the site was pretty small, they weren’t far away and they were safe. I was amazed to see there was just as much hippy clothing on sale as there had been in the 90s. Who still wears this stuff?! I was very pleased when my eldest bought himself a copy of A Weapon Called the Word, The Levellers’ very first album, which I’ve never had a copy of. I had it taped off a friend in the early 90s and then downloaded a few of my favourite tracks more recently. 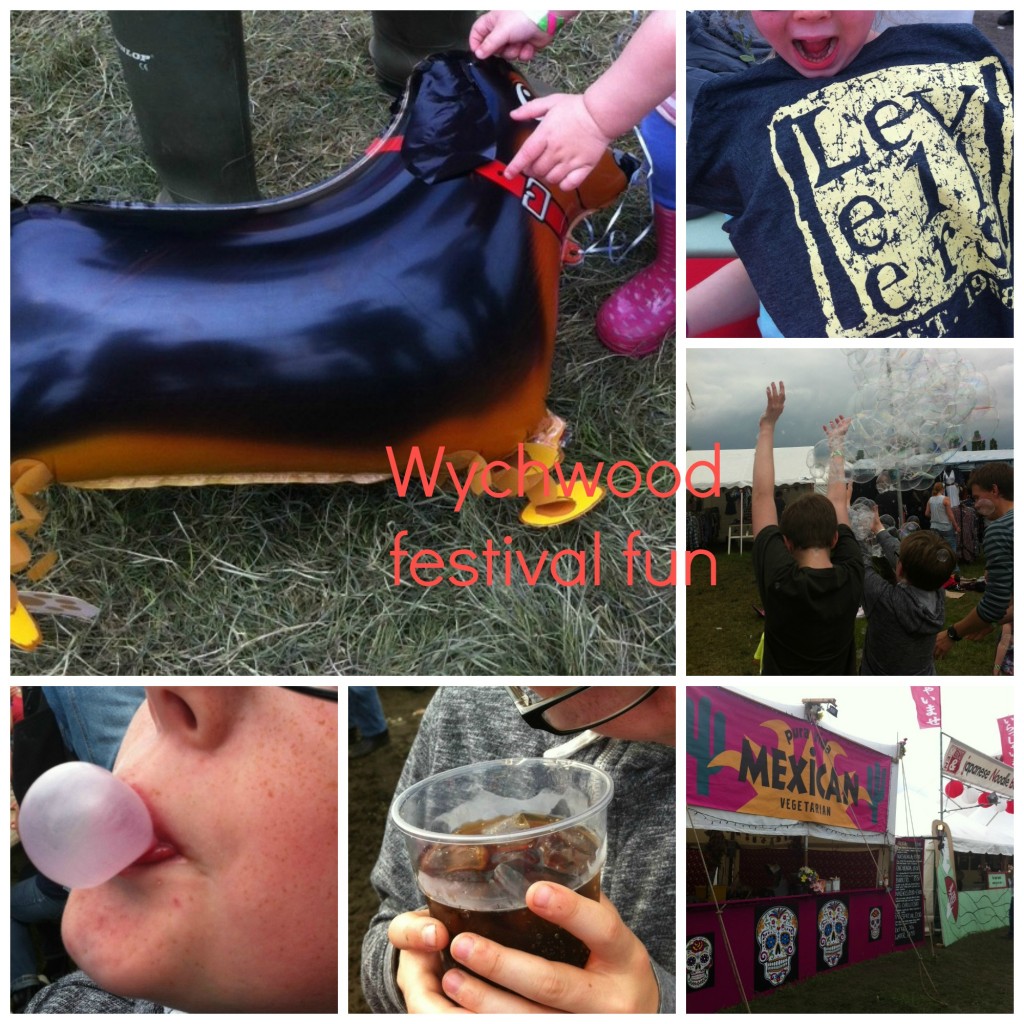 We went to see a singer in a tent (which conveniently for my husband sold beer) who had sounded interesting, but he didn’t sound like the singer described in the programme. He was OK, but he didn’t set the world alight, so we went back to our picnic blanket and the stalls. We were happy just watching the kids run around. My niece got the most amazing balloon – a dog with legs, that she could walk as though he were on a lead. She was VERY happy with him as she loves dogs, but unfortunately it burst.

The Levellers were doing a signing in the afternoon and my eldest was determined to be first in line. He made us get there half an hour early – and we were first in line! He got his CD signed and my daughter bought herself a Tshirt and got that signed. We also had a photo taken with them (by my dad, who isn’t used to cameras on phones).

My husband wanted to see Bad Manners in the afternoon, so we did. My younger son had found both his best friend and another boy from his class, so they were very happy together dancing in the mud. I’ll be honest, Bad Manners are slightly before my time (and I can’t say that about many bands), but I knew a lot of their songs. It was a really good show. 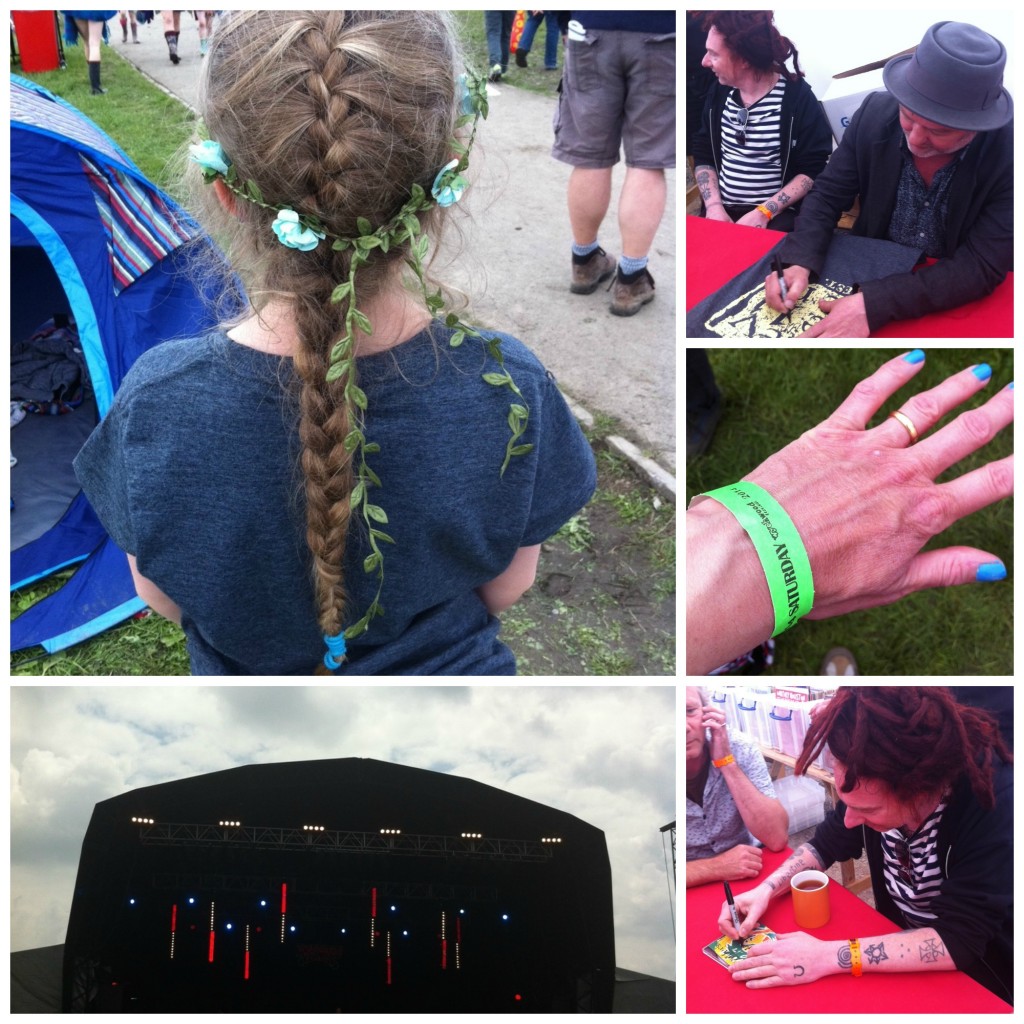 Then it was off to find food! There was a good selection of festival food – all freshly cooked and good quality and lots of vegetarian! Pretty much everything seemed to be about £6 a portion, which seemed like reasonable value. I went for noodles for lunch and chilli at teatime. My younger son had bacon sandwiches for both meals and the other two went for pizzas. The toilets were pretty good too. There was a lot of the posher sort of toilet, as well as the standard cubicles and the queues were short.

After tea, the boys and my younger son’s friend started playing with a giant balloon. I’m not sure where the balloon came from. Gradually more balloons, and more kids, appeared, until all you could see was balloons and kids. They also got hold of some water balloons, which they filled, but didn’t actually throw. This kept them happy right until The Levellers.

My daughter was restless and tired, so she changed into her onesie and was just going to stay in her little tent. My sister and brother-in-law went home, and my mum and dad just chilled out on the picnic rug. It was time for The Levellers!

We had a fantastic time at the Wychwood Festival and will definitely go back next year.