I ran the Cheltenham half marathon yesterday and, if I do say it myself, it went rather well! Regular readers will know I’ve been training for it for the last two or three months. This is my most local half marathon to date, which is fine by me! It means I don’t lose a whole day out of my life. It was rather a complicated day though, with the boys’ rugby, my daughter going to a birthday party and the palaver of booking my daughter’s swimming lessons (more on that separately).

This was also the first half marathon my husband and I had both run since 1996! We did the Robin Hood half marathon together in Nottingham in both 1995 and 1996 – completing in dead on 2 hours the first time and 1 hour 57 the second time.

My husband did a flurry of half marathons between 2008 and 2010 – three Great North Runs, a Bristol and a Bath. Then he quit just before I started MY flurry of them with the Bath in 2011. Training was never his strong point and he usually got injured during the run. This time he’d got himself properly prepared – running long distances regularly, even getting up to 14 miles. (I reckoned 12 miles was plenty for me in training.) He’s also taken up cycling so is generally fitter.

We’ve both got hooked on the RunKeeper app which showed he was running a mile approximately a minute quicker than me. So do you think we ran together this time? No chance. My husband’s pride was at stake! But, as I told my daughter, his legs are longer than mine, so his stride is bigger. I’m almost certainly actually running faster than him, he’s just covering more ground! I’m not having my daughter (or my sons) assuming men are better than women at running (or anything).

We set off at 8am for a 9am run and there was NO TRAFFIC. We had to walk down half a mile or so from the car park to the start line. We took the foolish brave decision to do this walk in just our running gear. We were the only people that stupid brave. It was 11 degrees, windy and threatening to rain. Yes, I was VERY cold.

First things first for everyone before a race. The toilet. I was a little unimpressed by the toilet facilities. There really weren’t enough of them and the queues were very long. To be honest, I would be surprised if everyone was out of the queue when the race started. There were separate urinals for the men, but they weren’t clearly signposted, so most men were queuing with the ladies for the cubicles. 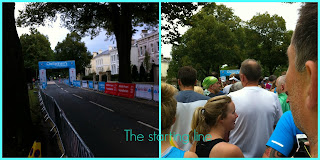 We got to the start line in the sub two hour section. It was very crowded, but thinned out almost immediately. ‘See you later,’ said my husband and he was gone. The race on the whole was very flat, but it started with a short hill. I glimpsed my husband in the distance when we went round the first corner and I never saw him again.

Within two minutes, it was raining. Big, cold drops. It rained for most of the race, but never too fast, so I never got soaking or felt uncomfortable.

It was a really nice route which went through town and nearby residential areas. There were people cheering and taking photos all the way around, which I haven’t known on any other race. The council estate residents were out in their pyjamas – and so were the private school kids from the boarding houses!

Having the app meant I was less fixated on the mile signs than I usually am. I was also feeling good, so wasn’t stressing about the end. There was literally nothing bothering me – no stones stuck in my trainers, no socks falling down (I’d bought new ones especially!), no tangled wires on my headphones… It felt like the perfect race and I don’t know why – maybe it was the temperature, maybe it was the people cheering or maybe it was the lack of hills.

I seemed to be getting through the miles rather quickly. I’d done seven miles before my average speed went over eight minutes and 30 seconds per mile. And it never went over nine minutes a mile!

There was one steep hill, which was long enough for me to tell myself I needed to walk, ,but not long for me to ACTUALLY walk. I’m pleased to say I didn’t walk at all. I have nothing against walking, but I still prefer to avoid it if I can.

The only hard bit of the race was Cheltenham Racecourse, which brought back not particularly nice memories of the Race for Life It was a depressing sight. I could see people running in all directions everywhere I looked. People were leaving the racecourse as I was arriving. They were in good physical shape and running fast. We were running round the racecourse for just over two miles between about 10 miles and 12 miles. I thought I might see my husband here, but I didn’t. When I was at 11 and a half miles, I wondered if he’d already finished running. I also hoped to see my daughter and my parents here, but the logistics of getting the boys to rugby had proved too much for them and they hadn’t made it – much to my daughter’s disappointment (and ours!).

After the racecourse it was downhill all the way (in a good way). My time was good and I still had plenty of energy to overtake people and sprint down the hill. I crossed the line in 1 hour 55 minutes and 13 seconds. I must say I felt a little tearful. I always run a half marathon in two hours – give or take a few seconds either side – and I’d knocked five whole minutes off it AND really enjoyed it.

Exactly a week before my 40th birthday, I’d run the distance faster than I’d done it at the age of 22.

Oh, and my husband beat me by just three minutes! 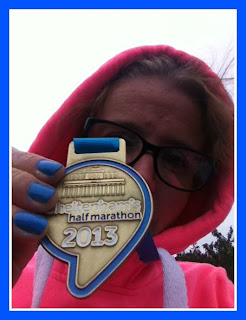