After training for possibly too long – I have been running at least eight miles twice a week for three months, the day of the Bristol half marathon finally arrived.

I don’t know what it is, I’m used to running stupid distances, but the big day did make me slightly nervous. There’s just that bit more pressure, that bit more uncertainty, even that little bit of loneliness of being a single person on your own in a huge crowd. And, yes, I do worry a little bit about the toilet.

We arrived in Bristol and the traffic was crazy and we got ourselves caught up in the wrong lane and couldn’t get to a car park. The first wave of runners set off at 9.30 and I was in the 10am wave, so we hit the absolute worst of the traffic. In the end I had to jump out of the car and go (searching urgently for a toilet on the way). Not quite as I’d pictured the leisurely walk to the start with my husband and daughter.

I was a green number – the fastest of the second (slower) wave of runners. I asked a marshall where the green runners were – he didn’t know. I asked another one and he told me I should go in with the pink runners. The slow ones. Great. Everywhere I looked were very beautiful, very colourful, very clean, very NEW trainers. As I said in my running tips for mums post runners don’t wear new or beautiful trainers. The young girls behind me asked if I’d done it before. I had – last year Had they? No. Had they really run before? No. They were raising money for charity and that was all that mattered. I do hope they finished in one piece.

At 10am we shuffled towards the start line, picking up to a jog about 100m before the start and finally, at about 10 past 10, crossed the line and started running. Sort of. Something was wrong. I couldn’t put my finger on it. Then I realised. These people were too slow!

I was trapped, surrounded by people who were too slow for me. I wove my way round them, got into a bit of space, and then got caught behind a wall of slightly overweight women in fairy wings and tutus. I made it round them, only to get caught behind another wall of women. And so it went for the first couple of miles, overtaking literally hundreds of people.

Last year I found the race hard and a little bit boring. This time I really enjoyed it. I felt like I was running with a smile on my face the whole time. I kept my head up and took in the atmosphere. The race goes out along the river, under the Clifton suspension bridge for the first four miles. Then you turn round and go back again. As I got on this stretch, the elite runners were already pouring off it and into the city. Well, they did start half an hour/ 40 minutes before me! I saw my old boss at the turning point – just like I saw her last year. She knew to expect me this year!

For a long time I kept pace with a man running with NO SHOES ON. Why would you do that? At two and a half miles there was a timer which indicated I’d run for 27 minutes. Except I hadn’t. Nowhere near. Which meant that I’d run pretty fast.

As I ran back down the river, overweight pink faced men, but mainly women, puffed and panted up the other side. Many of them walking, nearly all of them wearing charity Tshirts.

Then it was into the city – a bit of time in bedsit land and then round and round cobbled streets. People lined all the streets, endlessly cheering and clapping. It’s such a lovely thing and a credit to the British public that they are happy to spend their Sunday mornings cheering and clapping a bunch of total strangers plodding along the road.

My husband rang me and said ‘Are you at seven miles?’ ‘No, I’m at 8.’ He was impressed and surprised. I don’t know road names, but I recognise places. I ran up the cobbled street where they’d waved to me last year, looking for them, but they weren’t there.

My phone rang again. ‘Are you nearly at Queen’s Square?’ (I think it’s Queen’s, I really don’t remember, it may have been Victoria). ‘I’ve just come through there.’ It didn’t bother me that I’d missed them, but then suddenly it did.

By 11 miles I was getting pretty exhausted. The weather conditions were perfect, cool, cloudy and with no wind, but I was getting so I couldn’t regulate my temperature any more. I was drinking my own trusty Lucozade Sport Lite (a really stupid thing to drink when you’re running 13 miles), topped up with water handed out by army cadets and tipping a fair amount of it on myself to cool me down.

There are a couple of steep hills around the 11 mile mark. I recognised the one I walked up last year. Now I know it’s perfectly acceptable to walk and I always tell other people it’s acceptable, but I don’t like to do it myself! I pushed myself up that hill and the next. I didn’t walk at all.

I saw my husband and daughter around the 11 mile mark, then shortly afterwards. It was a lovely surprise.

Twelve miles and people are cheering frantically. We’re right in the city centre. There’s music blasting and people shouting ‘a mile to go!’ ‘a kilometre to go!’ ‘last 500m!’. A half marathon isn’t 13 miles. It’s just over. I wanted to do a sprint finish, but the 13 mile marker is too early. We ran back past the green start where I should have started the race. At the 100m mark I started to sprint. I pushed myself, I passed people. 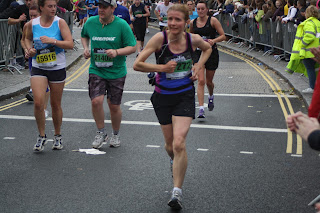 Over the line. I fumbled my phone and checked my time. 2 hours and 33 seconds. A good time! More than six minutes faster than last year. I knew the chip time would be faster. But would it be 34 seconds faster? I couldn’t keep the smile off my face as I made my way slowly through the crowds to collect water, a silver blanket (which I really needed) a medal and a very large ‘small’ Tshirt.

I made it through to my husband and daughter, who handed me a much-needed Snickers bar.

The chip time was 2 hours and 12 seconds. I came 5,706th out of 9,975 people! Not bad for a mum of three who’s considered a ‘veteran’. Women over 35 are veterans. A hundred people finished in the 30 seconds after me. If I hadn’t have been stuck behind the fat fairies I would almost certainly have cracked the two hours, which was something I didn’t dare hope to do, but is what everyone really wants to achieve.

I have no idea why I enjoyed it more than last year or found it easier than last year. Maybe it was better for my morale to be the ‘fast one’ among the slow people. Maybe being stuck behind fat fairies is the way forward?!