We’ve had our guinea pigs for a few weeks now. So how is it going?

Very well, I would say! I am pleased with how the kids have taken to being pet owners, and pleased with how I have embraced it myself. Guinea pigs are a lot more fun than I imagined. They are cute, funny and very entertaining, and also reasonably happy to be handled. Having been a life-long rabbit fan, I think I might actually (whispers) prefer guinea pigs to rabbits.

We all love the guinea pigs in our own way. My eldest and I are probably their biggest fans. As soon as my eldest gets in from anywhere, he will be straight out to the hutch to grab a guinea pig to hold. I make sure I pick them up a couple of times a day too. My daughter isn’t brave enough (or quick enough) to catch one herself, so she will ask me or her brother to pick one up for her to hold. At first she had ‘her’ guinea pig – Daisy, the light brown one, and the boys had theirs – Eric, the longer-haired, patchy one. But now there is no distinction – both guinea pigs belong to everyone.

An unexpected advantage of the guinea pigs has been the tenuous bond which has built up between my eldest and my daughter. My eldest, who is always niggling my daughter and being mean to her, will happily pass her a guinea pig, sit with her stroking the guinea pig and then put the guinea pig back in the hutch.

When we’re playing with the guinea pigs, there is usually one person absent – my younger son. He is afraid to hold them, afraid that he will drop them or hurt them or that they will run away. But, put the guinea pigs in the run, and he will sit talking to them and playing with them through the bars (or even climb into the run with them) for hours.

I was worried that we wouldn’t hold them enough or give them enough attention, or clean them properly, as happened with my rabbits back in the day. I loved my rabbits, but I never held them once they’d grown up – they were just too hard to catch. I didn’t want that to happen with the guinea pigs.

I know people are anti-pet shops, but I am very grateful for all the advice the pet shop gave us. They told us what to feed them (hay, nuggets and a little bit of fresh veg – they can eat loads of types) and how often to clean them. They told us they needed to play outside, needed toys to keep them amused and also to keep their teeth and claws at a healthy length. They told us we needed to pick them up regularly and handle them. And we’ve followed this advice to the letter. It’s really working. 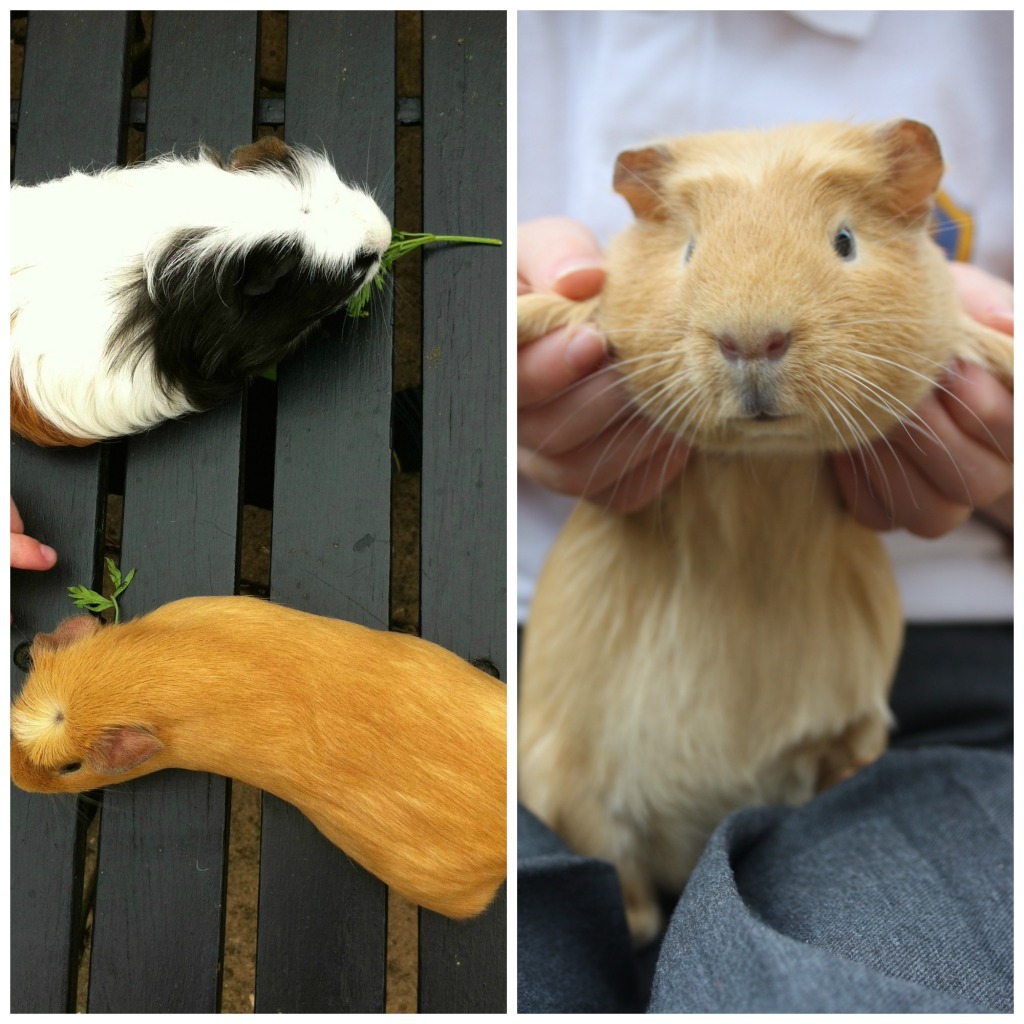 There’s a feeding and cleaning rota, which gets done with only a minimum of nagging. We give them a weekly clean, with a small ‘poo remove and sawdust change’ every couple of days. The kids, remarkably, do this without complaining. They are learning some responsibility and their reward is pets to cuddle and make them laugh as they chase around the cage and climb on things.

We are enjoying having the guinea pigs and they are clean, happy and healthy. I’m hoping the enthusiasm can continue as we move into autumn and winter and there is less time to spend outside with our pets.

I always thought life was too short for pets, but now I’m starting to think we’ve missing out for all these years by not having them. I actually can’t believe I’ve said that.