My younger son, my beautiful boy, is 18 years old. I can’t believe I now have two adult ‘children’.

My son came into the world as a big, grey baby. He was 9lb 3 and slow to start breathing and crying. He spent a few hours in special care due to a heart murmur, where he attracted a fair bit of attention. Even ‘normal’ sized babies were a phenomenon there. Nine pound babies were unheard of!

I realised my son was highly intelligent when he was about 18 months old. I know people (including my son himself) think I’m mad, but I was never proved wrong. There was always so much logic and thinking behind everything he said and did, even at that age. His nursery and playgroup knew how clever he was, as did friends’ parents. His reception teacher was very dismissive when I warned her that he was intelligent. How would I, a mere mother, know that?

No, I haven’t ever got over that… Nor have I got over him being repeatedly left out of the primary school football team in years 5 and 6 because of course kids can’t be clever AND good at sport, can they?! (Of course they flipping well can!)

My son got into the highly selective grammar school I always knew he was destined for. And he has absolutely thrived there. It suits him to be surrounded by other intelligent kids and not to stand out too much, but to be challenged in his school work. He’s made some brilliant friends, who he has been friends with right since year 7. His friendship group consists of 10 boys, which sounds rather a lot, but it works for them.

My boy got brilliant GCSEs, but has always been rather dismissive of them because he didn’t actually do exams, so feels he didn’t earn them. He is currently doing four A Levels – in chemistry, biology, maths and PE. All of his friends have now dropped an A Level, but he has decided to stick with the four. He has brilliant predictions and is really taking A Levels in his stride. He’s always been very modest about his achievements and not really believed in his own intelligence, but just lately he’s realised that he finds things a lot easier than others – even at his highly academic school. While others have to work really hard to achieve slightly lower grades than him, he gets his remarkable grades while mainly playing Pokemon.

He wants to study medicine and, specifically only really wants to study it at Birmingham – because the athletics facilities are so good. Like everyone applying for medicine, he had to take a medical aptitude test, which he was nervous about. He felt his wasn’t doing very well, but he came out with 97% on the maths bit of the paper and in the top 15 per cent overall, including for clinical judgement. He was also worried about putting together his UCAS personal statement, but his teachers thought he’d done a very good job and gave him very minimal suggestions for amendments.

In the last few months, my son has stepped up and way out of his comfort zone as a prefect (house official, as they are known at his school). This has involved supporting year 7s, as well as helping younger kids with music and drama concerts. Music and drama aren’t my son’s thing at all, in fact they’re not a strength of anyone in his house. (There is a theory that they created the houses with different strengths, and my son’s house is the sporty house. You could even see that when they all stood on the stage to sing in the concert. The boys in my son’s house were significantly bigger than the boys in the other houses.) Knowing that he isn’t confident with such things, but seeing him do them anyway, makes me really proud.

My son has always shown an aptitude for sport and started playing football and rugby at the age of 7. He gave up club rugby at 11, but thrived at school rugby. He played club football right until the season came to an abrupt ending in year 11, when Covid and lockdowns struck. It was in year 7 that he discovered a rather unusual talent – long jump. Since then, he has nurtured his own talent, as well as attending a local athletics club.

My son’s long jump has been the absolute highlight of recent years for him – and for us too. He is committed to it. He works hard and it brings him a lot of joy. While other boys his age go out drinking, my son will go months without alcohol, as it hinders his athletic performance. For the last two years, he has been very high on the UK rankings for his age group. This year, his dream came true and he finally got to compete at the English Schools national finals. Even better, he placed fourth, when he’d hoped to place in the top eight.

Over the last year, to support his progress in athletics, my son has become a keen gym-goer. As a small child, he was big built, then he went very skinny at secondary school, which lasted right until he started to go to the gym. Now he is very strong and never stops eating. He is very aware of his own needs, particularly in terms of protein, to help with his fuelling and recovery.

My son is the best of his friends with his sister, but the strong bond with his brother was broken a few years ago. They are both lovely boys, but they are very different. He is close to both myself and my husband and always happy to go for a walk with us or just to pop out on an errand. As a family, we go out for a walk together every evening, which is a great chance to hear about everything going on in the kids’ worlds. I really value that. I think it’s a privilege that our teenagers are happy to spend time with us.

At home, my son is usually quiet and usually in his room. His room is a mess, but he’s pretty well trained in the rest of the house – apart from dumping his bags in the kitchen every time he comes in and never moving them.

All being well, this time next year, my son will be at university. My big, grey baby is all grown up. 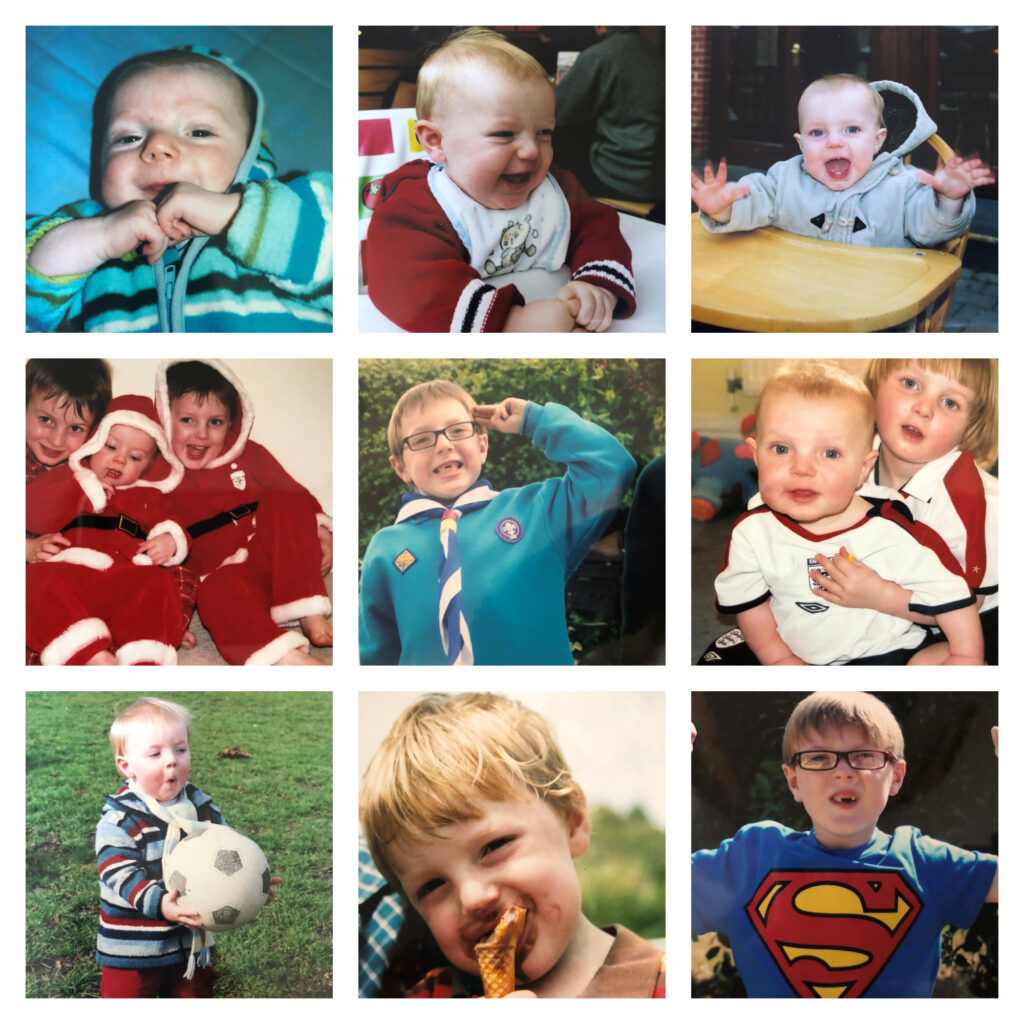