My son, gaming and the eBay phase

Home » Family » My son, gaming and the eBay phase

Nowhere in the parenting books does it say that, between the ages of 15 and 18, boys will go through the ‘eBay phase’.

This is something my eldest went through and now my younger son is going through it too. From talking to other parents, it seems it is very common among teenage boys.

It starts off small – maybe they are decluttering and decide to get rid of some old toys to make a few quid. Or maybe they want a new game or item of clothing which is a bit expensive, so they start browsing eBay for a cheaper, secondhand option.

Before you know it, they are buying and selling like there’s no tomorrow. The sellotape is disappearing fast and trips to the post office are a weekly occurrence.

My younger son has got a retro gaming habit. As gaming habits go, it’s pretty tame. There’s no Call of Duty or Grand Theft Auto (or whatever else people play these days), it’s all Pokemon and Mariokart. My son is strictly a Nintendo boy.

He bought himself an old Gameboy (not proper old, just ‘a few years before DS’ old) from eBay so he could play Pokemon games which aren’t available on the Switch or DS. Then he bought another old Gameboy – I’m not sure why. He bought all the old games he wanted for the Gameboys.

Then he noticed a pile of long-forgotten stuff behind the door in his bedroom – Skylanders. He’d had an absolute ton of Skylanders back in the day, and he’d completely forgotten about them. So he sold them on eBay. He didn’t even need to go to the post office, because he’s got online postage completely sorted. And there’s a parcel postbox within walking distance of home. Result!

He bought a third Gameboy with the express purpose of selling it at a profit. He ended up with duplicates of some of the retro games, so he sold them.

He knows how much all of this stuff is worth and he makes sure he’s making a profit. He’s got very good at checking the prices on eBay and knowing when he’s going to get a bargain – which he can then sell on.

The other day, he was telling me about the retro consoles and games he still doesn’t have. He said the words ‘Nintendo 64’ and I said: ‘I think we’ve got one of those in the garage’.

He set about pulling apart the garage to find it. He couldn’t believe I’d never thought to mention this before.

After half an hour, I began to question myself. I wouldn’t have given it to charity, would I? I didn’t remember selling it or giving it away, but I also hadn’t seen it in a really long time.

The first thing he unearthed was the controller. Surely if that was there, the console would be there too? He kept digging in a great tangle of wires and there it was – the Nintendo 64! And there was a little bag there too.

‘That will have Dad’s old Gameboy in it.’

A Gameboy too! A proper original one! He couldn’t believe it. It’s in immaculate condition and still has a terrible golf game with it.

The only time I ever see my son that excited is when he’s at an athletics competition. Christmas had come early (or late) for him.

He watches YouTube videos of people playing retro games and saying they’ve found stuff in the garage. He never would have believed that he, the child of a distinctly non-gaming family, would be lucky enough to find both an N64 and original Gameboy in the garage.

We thought the game – Super Mario 64 – was missing. It was a shame, but not the end of the world. He’d found a fortune’s worth of stuff. He could buy it on eBay.

He managed to find the game the next day, but the N64 was short of one cable. He couldn’t get it from eBay, so he had to go against all his principles and go to Amazon for that. He bought Mariokart from eBay. It’s not as good as the Wii version, but that’s not the point.

Apparently there was £230’s worth (in CEX prices) of Nintendo stuff in the garage. My son is a very happy boy.

And me? I’m very happy too. Because I’ve rediscovered Tetris. I used to laugh at my mum for playing it, but she was probably younger than I am now at the time. It took me a couple of attempts to get the old magic back. Just like hearing a long-forgotten song from the 90s – one minute you barely recognise it and the next you’re singing along to every word.

If you want me, I’ll be busy playing Tetris while singing along to New Model Army’s back catalogue. 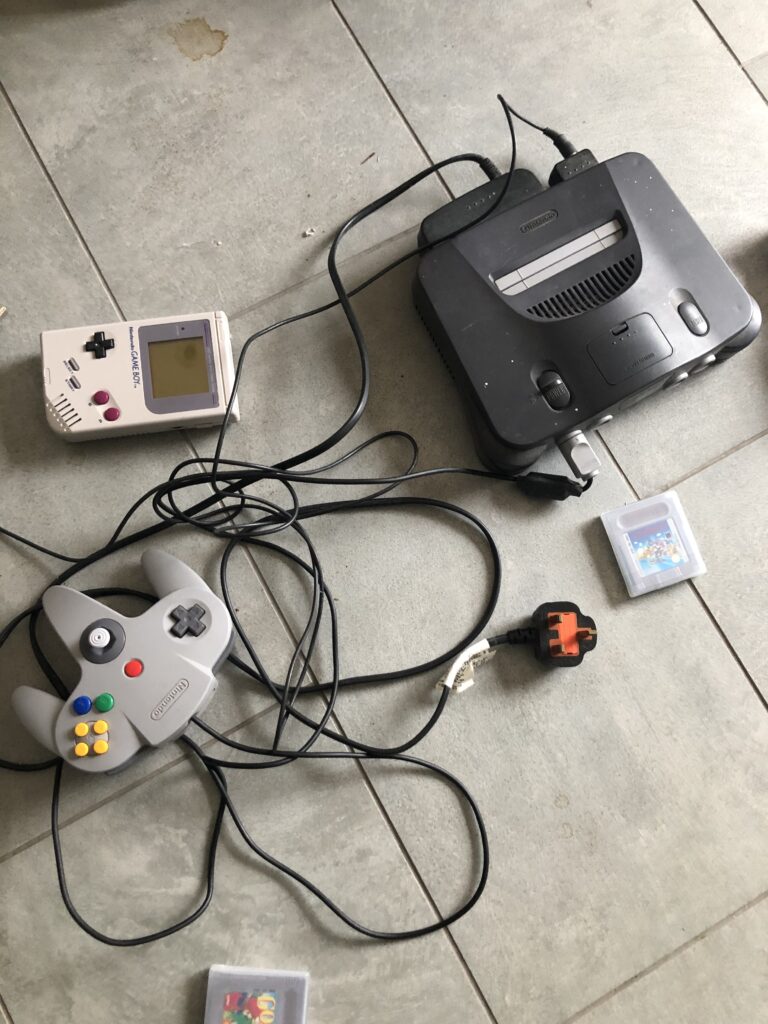