So it was third time lucky for my son and he finally managed his dream of competing in long jump at the English Schools national athletics championships. He made the county team in 2019, but had to pull out due to a fractured pelvis. The competition didn’t happen at all in 202o, and 2021 had a more challenging route to qualification, but he got there!

He was so excited to have achieved his dream and we were so excited for him. He’s worked really hard to get there and he’s made sacrifices too. As teenagers are finally getting their lives back and able to socialise, he’s refused to drink any alcohol and always goes home around 10pm, when his friends are having sleepovers and staying up drinking until 3am.

My son always likes to have aims for every competition. He thinks about what he wants to achieve and tries to make it happen.

For English Schools, his aims were to be in the top eight, to jump a new PB and to get a ‘national standard’ badge for jumping over 6.80. He also had an aim to reach 7 metres, which is his overall aim for the season.

The competition was held in the regional athletics stadium in Manchester, in the shadow of Man City’s Ethiad Stadium. His event was the first, at 12.30pm, and he needed to arrive by 10.55am at the latest. The team manager had encouraged competitors to get a hotel, as if there was an accident on the M6 and they didn’t arrive on time, they wouldn’t be able to compete. My son didn’t want to get a hotel, as he likes to be quite careful about what he eats before a competition.

The traffic was pretty good, apart from roadworks on the roundabout as we came off the M6.

We arrived at 9.30am, so went to a Starbucks for a while. Then my son got to the stadium early and went into the warm up area, while my husband and I found our seats near the long jump pit. 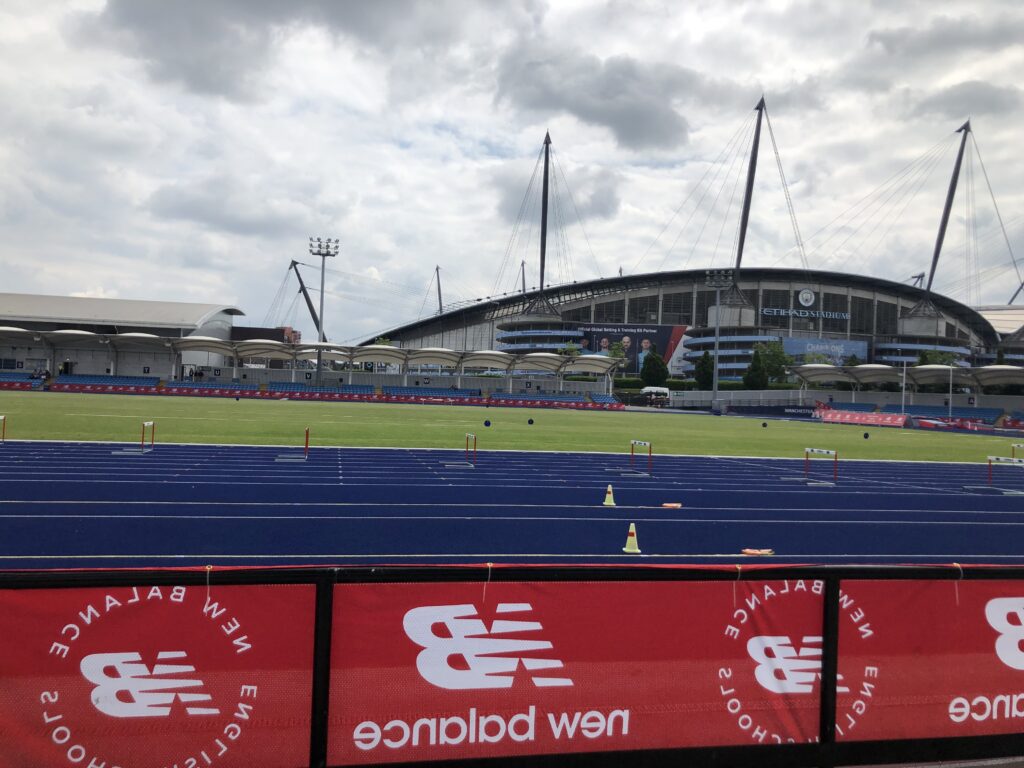 There were supposed to be 15 boys in the long jump, but there were actually 12 of them. On the whole, they all looked a lot like my son. Athletes do tend to be built rather similarly – both from their natural shape and the work they put in. My son looked a bit nervous, which is unusual for him. He measured out his run-up, then all the boys did a couple of practise jumps.

On their first jumps, most of the boys were jumping around the 6.30 to 6.50 mark, which would have been on the low side for all of them. Every time they jumped, their distances were put on a manual scoreboard, which was rotated all the way round, so the whole stadium could see how far they had jumped (although I suspect the people in the distance would have had to squint!). I tried to keep track of them all, but sometimes I missed them.

My son’s first jump was 6.54 – far from his best, but in keeping with the competition.

But then another boy went over 7 metres.

The boys were all getting their confidence up. After that second jump, I could really see a change in my son. The adrenaline was pumping and he knew he was good enough to be there. 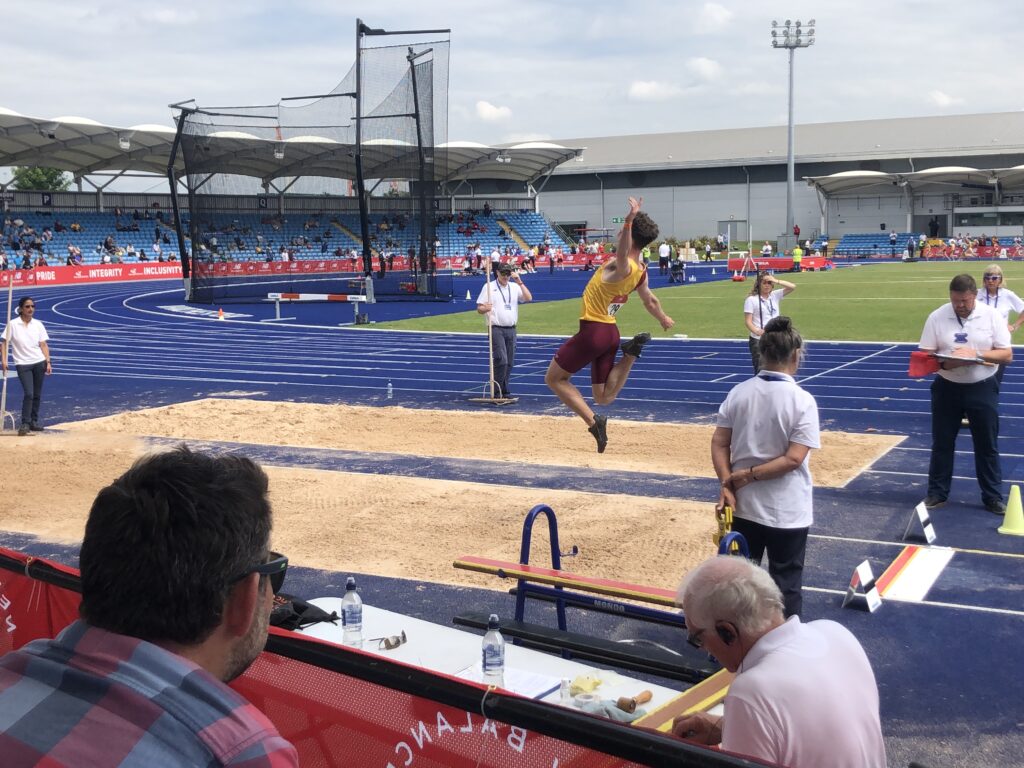 The boys were starting to talk to each other a bit more. Although they are in competition, athletes always support each other. They do this thing where the boy who is about to jump starts clapping slowly, then the other boys and the crowd start clapping. The clapping gets faster and faster as the boy runs. It spurs them on to run faster and jump higher and longer. Unfortunately the added adrenaline usually gives them a no jump! (They can jump before the board, but if they go over the board it’s a no jump.)

All of the boys got three jumps and the top eight got an extra three jumps.

My son was still lying in fourth.

The rest of his jumps weren’t as good as his second jump. His next best was was 6.64, but it didn’t matter. You only need to do one really good jump. And none of the boys in fifth, sixth or below managed to beat 6.86.

He wasn’t going to catch the boys who had jumped over 7 metres and that was OK. It would have been hard if there had only been a centimetre or two between him and third place.

In the end, the competition was won by a boy jumping an incredible 7.23. The boy who jumped 7.15 came second.

And my son came fourth.

There was a presentation for the boys in the top eight and their names and distances were read out over the tannoy. Of course the top three all got medals, but my son got a certificate saying that he came fourth.

What a fantastic achievement! 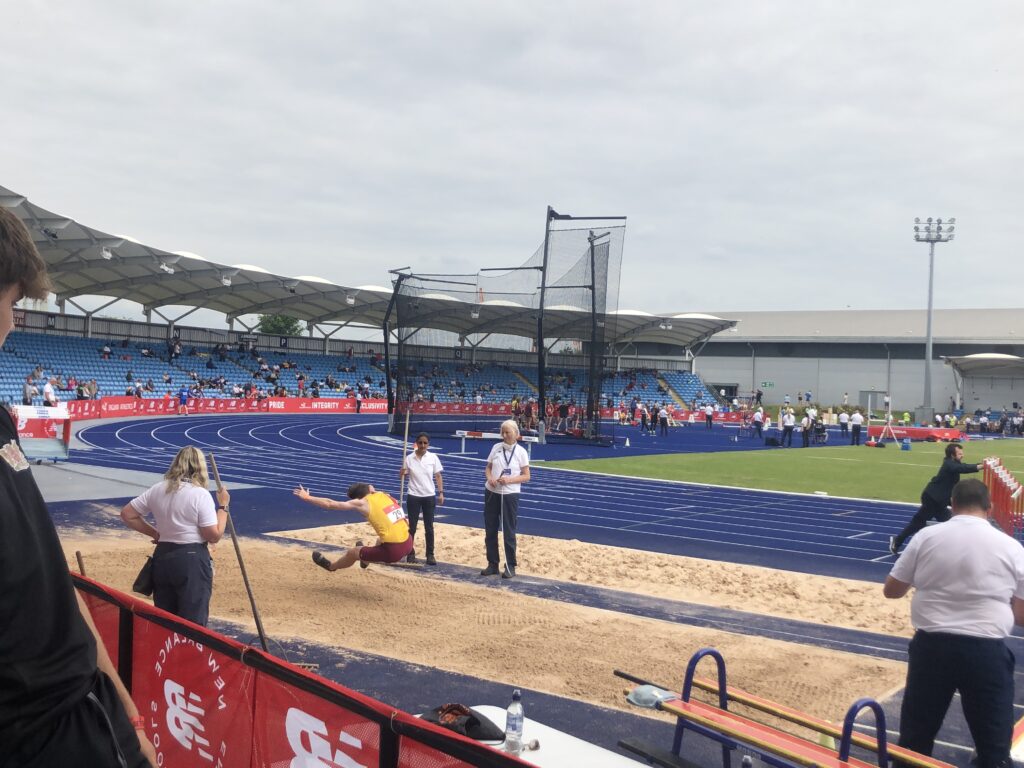