For an athlete like my son, who is really serious about doing his absolute best in his sport, you have to get everything right. Every little change – from the right shoes to the right length run up to different warm up exercises – can just give that few extra centimetres which make all the difference to him achieving his dream. And one of the most important things to get right is food.

There have been times when we’ve got it wrong. Recently, my son made some high protein food to fuel him for a competition, but the portion wasn’t big enough, and he really struggled. Last year, during the indoor season, he did a good triple jump. Then we went to McDonald’s for lunch before he did his long jump. Not only was he tired from his triple jump, but the McDonalds did nothing to fuel him. He’s never eaten McDonalds on a competition day again.

Now I’m the first to admit that we haven’t always got food right in our house. In fact, I’d go as far as to say that we got it very wrong. For most of my kids’ lives, we’ve relied far to heavily on frozen food. As a parent, I was juggling a lack of time (as they always had to be at after school activities), a very fussy daughter and always having to make a vegetarian and non-vegetarian version of everything. Processed food was the easiest way to go on weekdays. But I knew it wasn’t right.

We improved our food during the first lockdown. My son was also learning about nutrition through his GCSE PE and was improving his own diet.

When he joined the England Athletics Youth Talent Programme, he had group and individual online nutrition sessions. The nutritionist asked if there were any barriers to his nutrition, and he told them his siblings were the barrier.

While the exact requirements vary, depending on whether an athlete is male or female, what event they do and their size, the basic principles of feeding an athlete remain the same. They need carbohydrates for fuel – understanding the difference between simple (fast release eg white bread, white rice and ripe bananas) and complex carbohydrates (slow release eg brown bread, brown rice and lentils). They need protein to build muscle and aid recovery and they need some good fats (eg from fish, olive oil and raw nuts) to reduce inflammation and support cardiovascular recovery. And they need a variety of fruits and vegetables to give them the vitamins and minerals they need support the immune function and muscle function and development.

The nutritionist advised that a 75kg sprinter, which is pretty much what my son is, requires 105-120g of protein a day. And that he needs to eat protein four times a day. An athlete should eat 20-25g of protein within 90 minutes of completing a session (whether a competition or a training session) to help repair muscles. This is best eaten as part of a meal with carbohydrates. Carbohydrates should be eaten immediately after a session. Delaying leads to fatigue and an increased risk of injury.

We now know so much more about what to eat and when – both before a training session or competition and after – to get the maximum energy during the session and the maximum recovery afterwards.

We also know a lot about lean protein now – mainly chicken and turkey. Athletes shouldn’t get their protein from foods which are also high in saturated fats. The nutritionist also doesn’t advise using protein supplements, and my son is on board with this.

Saturated fats, like those found in red and processed meats, as well as biscuits and crisps, can cause an increase in visceral fat (the fat surrounding the organs), so should be avoided. Admittedly, my son does have one packet of crisps and a couple of biscuits a day, but he also eats a lot of protein.

As a family, we ate very little red meat anyway, but it has gone completely now. Spaghetti bolognese is made with turkey mince these days.

My son eats cooked chicken or turkey in his sandwiches for lunch every day. Even better would be to eat it with rice and vegetables, but neither of us has quite got round to being that organised! 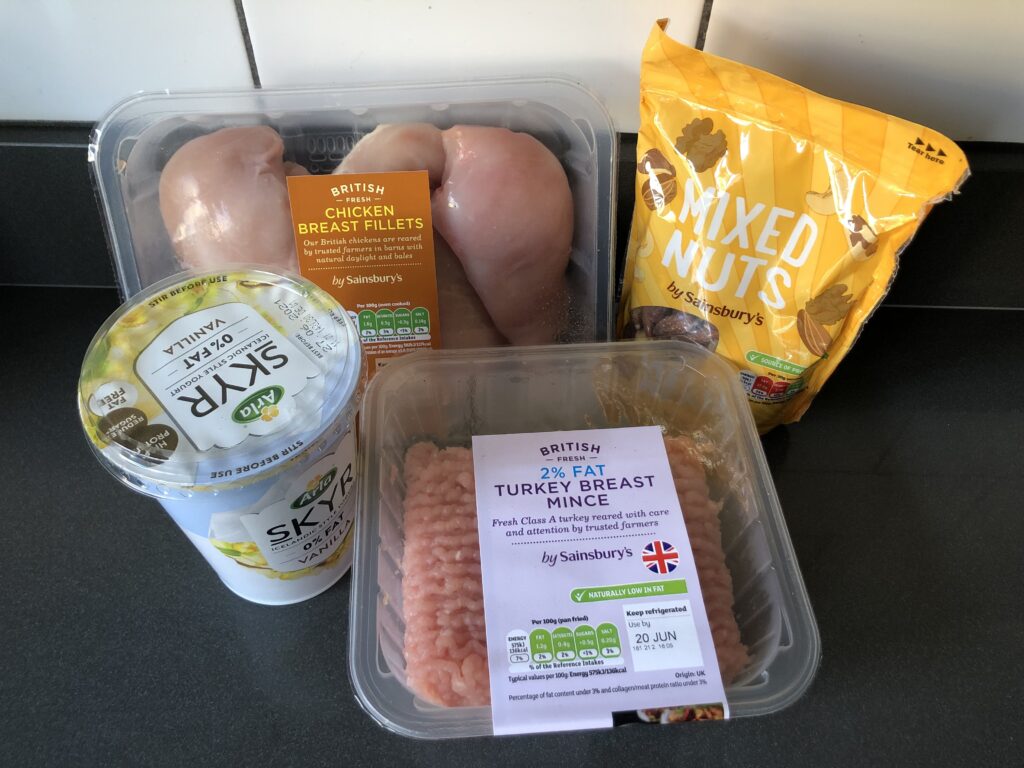 He has embraced Skyr yogurts, which are incredibly high in protein, while also being low in fat. He’s never eaten that much in the way of fruit and vegetables, but he eats a banana for breakfast every day and also takes one to competitions. He’s even started drinking 150ml of orange juice, which he really doesn’t like! The nutritionist advises seven different fruits or vegetables a day, mixing up the colours.

She advised that low fat cottage cheese would make a good evening snack. He persevered with it for a couple of weeks, but he needed to eat a huge quantity to get the required amount of protein and he just didn’t like it enough, so he gave up on that. Instead, after a training session, my son will eat a couple of slices of toast, a handful of nuts and his Skyr yogurt. Sometimes he will drink a glass of milk for the protein and the calcium.

While we could still do more to improve his diet, he has come a long way in the last few months and we’ve found a balance which works for him and fits in with the rest of the family. It is now so embedded for him and for the rest of us, that I can’t ever see us going back.

Although I do worry about how he will afford all of his chicken and turkey when he goes to university next year! It is important that he keeps eating the good quality foods if he wants to continue to make progress as an athlete.

One thing we struggled with as a family was the timing of meals to fit around a 6pm training session. Basically, my son could eat at 4.45 or 7.45. If he ate at 4.45, the food would still be lying heavily in his stomach and would make it difficult to train to his full capacity. But if he ate at 7.45, he would have no energy to train at 6pm. The nutritionist came up with the perfect – and obvious – solution. Now I get his meal for 4.45 on a training day and he eats half of it. Then he saves the rest and eats it when he gets home. It works brilliantly for him.