Birth of a big boy

When my boys were born I didn’t have a computer, so I recorded their birth stories on a Dictaphone, so I could type them up at a later date. Then I put the Dictaphone tapes in a box, er, somewhere. And they haven’t been seen since. And anyway, I probably couldn’t find a Dictaphone to play the damn tapes anyway.

So in the absence of this tape, and in recognition of his birthday, this is what I remember of my younger son’s entrance into the world eight years ago.

My second pregnancy was my longest and my hardest. From quite early on, I knew he was a big baby. Every time he moved, I felt it right at the top and right at the bottom of my stomach. I kept asking my midwife about it, but she wouldn’t be drawn on it. She just said the baby was ‘a reasonable size’. Which I took to mean 8lb. 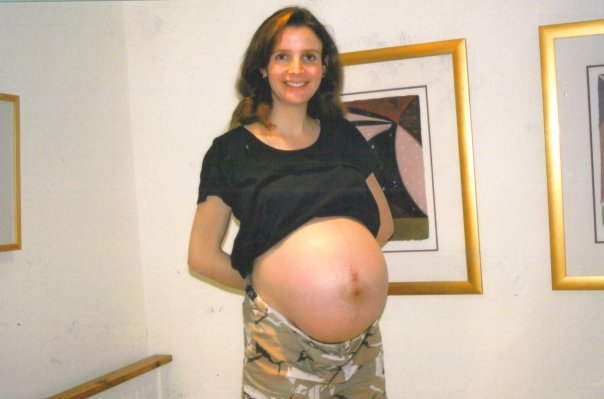 It was a hot summer (remember those?), I was very big and my final trimester was plagued by infections that left me feeling run down. And like I was going into labour. Four weeks before he was born, I went into hospital no less than four times over the course of the week because either I or a midwife thought I was going into labour. On the fourth time they decided to investigate why and it turned out to be an infection.

So there I was, thinking I was going to go into premature labour, and my boy kept me hanging on until four days past my due date. His big brother was born three days early, and started coming five days early, so I assumed he would do the same. When he didn’t, I felt quite down, but once I got to the due date I cheered up and decided to enjoy the bonus extra days with my only child.

Like his big brother, he started making his presence known early on a Monday morning. Unlike his brother, he had the decency to be born on the same day.

I had mild contractions in the morning and throughout the day. So I stuck the TENS machine on and stayed at home. Needless to say, my husband went to work, promising to come home when he was needed. So my mum sat with me for most of the day. As an added bonus, my son was at nursery.

At teatime I made a truly hideous meal of tortellini with peas and sweetcorn in Dolmio. But I guess I can be excused that, what with being in labour and everything. I certainly regretted it later as I tasted it all the way through to the birth.

My husband and son came home and my mum went back to her house. As soon as she’d gone, I knew I needed her back. Suddenly I was in a lot of pain. I was trailing up and down the hall, walking through my contractions. My poor 2 year old had no idea what was going on. He was trying to speak to me and I was ignoring him. At one point the door shut in his face. I was mortified, but it was a symbolic moment. For the first time in two and a bit years, he wasn’t my number one priority.

My mum came back to look after my boy, and we set off for the hospital. I think it was about 7.30pm when I was admitted. It was a nice atmosphere. The midwife didn’t ask me how I wanted to give birth (my previous midwife had made me stand up and it was horrible), she just lay me down on my side and dimmed the lights.

I waffled on a little bit about wanting an epidural, but my heart wasn’t really in it. I never actually wanted an epidural. I had gas and air and the TENS machine, expertly managed by my husband.

My previous midwife wandered through and talked me out of the epidural nonsense. She, bizarrely remembered that I was obsessed with VW Beetles. She’d had one when I had my older son and had just upgraded to a soft-top. I was very excited to tell her that I’d taken posession of my own Beetle just four weeks earlier (still got it!).

They didn’t examine me as soon as I arrived at the hospital and by the time they did I was 10cm dilated, or maybe it was eight, I’m not sure. Either way, it was good. I realised I could take the pain and stopped going on about epidurals.

I can’t remember how long I was pushing for. What I do remember is that the midwife went off shift at 9.15pm and had written on her notes that I wasn’t actively pushing, although I was fully dilated. I always remember things I’ve read better than anything else!

So I’m guessing I must have been pushing for an hour or nearly an hour.

At some point a junior doctor joined us in the room to witness his first natural birth. My husband sat having a very pleasant conversation with him all about junior doctoring and I felt a bit left out. Eventually I had to say, ‘Excuse me, do you mind focusing on me, please? I’m giving birth here.’ He told me off for being impolite. I’ve watched One Born Every Minute – I’ve seen just how impolite women can be during labour and I was NOTHING like that.

Then the second midwife turned up and turned on the resuscitator thing – the baby bed thing with the light above it and all the equipment below it.

As I was pushing, my waters broke with an almighty pop and hit the end of the bed. And there was meconium in them. Unborn baby poo, if you don’t know what I’m talking about. This is not a good thing because of the risk of the baby inhaling it. So a paediatrician came into the room.

Between them, they came up with a plan of action for how to deal with the meconium. As soon as my boy’s head popped out (and at this point we didn’t even know he was my BOY), the second midwife started hoovering his face to get the meconium out of his airways.

I’m not sure how many more pushes it was, maybe one, maybe a few, but soon afterwards a big grey lump landed on the bed. It was 10.23pm. He was the wrong colour, he didn’t cry and there was that meconium to worry about. I can’t remember if I got a quick cuddle before he was whisked off to the machine or not. I did get to confirm he was definitely a he.

Those first few minutes were tense as he was slow to start breathing. I was in a ‘just given birth’ kind of haze, so I didn’t think it affected me as badly as my husband. Again, looking back at the paperwork, I remember his Apgar score at one minute was just 5, but I think it was up to 9 by five minutes and 10 by 10 minutes.

Despite the initial worries, the midwife was able to say ‘That is NOT an 8lb baby’. It was a 9lb 3 baby.

It was also a very good baby, a baby who fed without any trouble. I felt completely in love with him and at peace with the world. 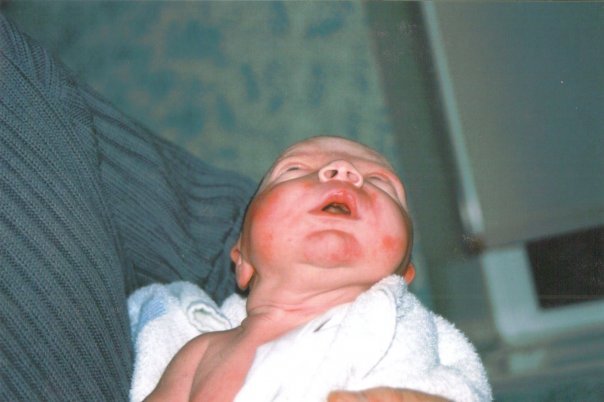