Cheltenham half marathon 2019 was my 18th (I think) half marathon in total, my sixth at Cheltenham and my fourth this year. Since running my first marathon earlier this year, 13 miles has held no fear for me whatsoever. In fact, I quite often just run 13 miles on a Sunday morning for fun.

A few weeks ago, I heard some men at parkrun talking: ‘Are you ready for Cheltenham?’. And I thought: oh yes, people get ready for half marathons! In fact, not just people – me. I have always worked really hard for a half marathon. I needed to get focused.

The difference between Cheltenham and the other half marathons this year was that I wanted a good time. I ran Warwick as a training run for my marathon – it was an exercise in running to my marathon pace in race conditions, when the temptation is to go fast. Tewkesbury was exactly a week after my marathon, so to run that at full pace would have been madness, so I settled for nine minute miles – faster than marathon pace, but slower than my normal pace. And Cheltenham Challenge? Well that was just a laugh – and also torture. That was running, walking, climbing, skidding and surviving.

My husband was very fixated on a PB for Cheltenham and I thought he would get it – he has run more than usual and faster than usual in training. His mindset rubbed off on me and I thought maybe I could get a PB too. He had a plan for his pace. If I’d run to pace at Newport, Warwick and Tewkesbury, I could do it at Cheltenham, right? Of course I couldn’t – I hadn’t trained to pace. 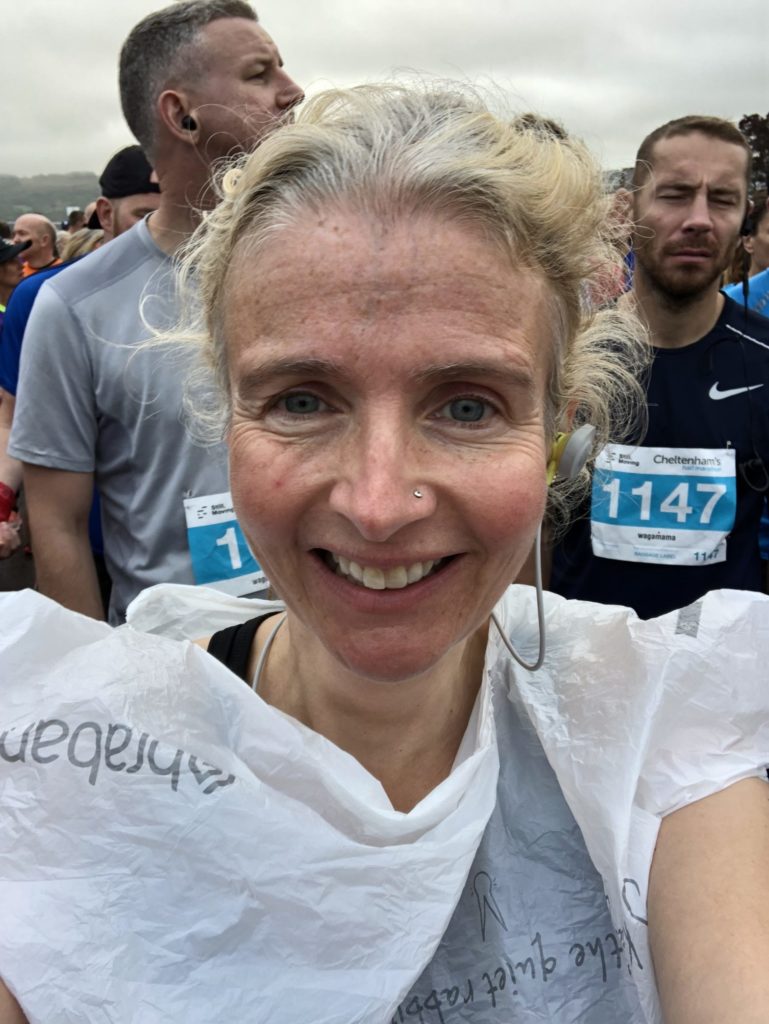 The weather forecast was horrendous – thunder storms all morning –  but luckily the rain passed earlier than expected and it was just drizzling. We drove there, rather than my dad giving us a lift and dropping us half a mile away, like we usually do. We then went to the toilet multiple times as usual – and discovered that there are far more toilets open than the ones we usually queue for. By the time the race started, it had stopped raining altogether. But it was humid and windy.

The start of Cheltenham half marathon is perfect for getting a good pace – the first mile is basically downhill from the racecourse into the village of Prestbury. It was very crowded at first – it felt like there were more runners than usual this time (in fact there were 2474 finishers and a handful of people who didn’t finish). So the first mile marker appeared in no time. The second mile is very pleasant – running from Prestbury to the edge of the town centre. Mile three takes you through the town centre and to the first water stop. All so far, so good. 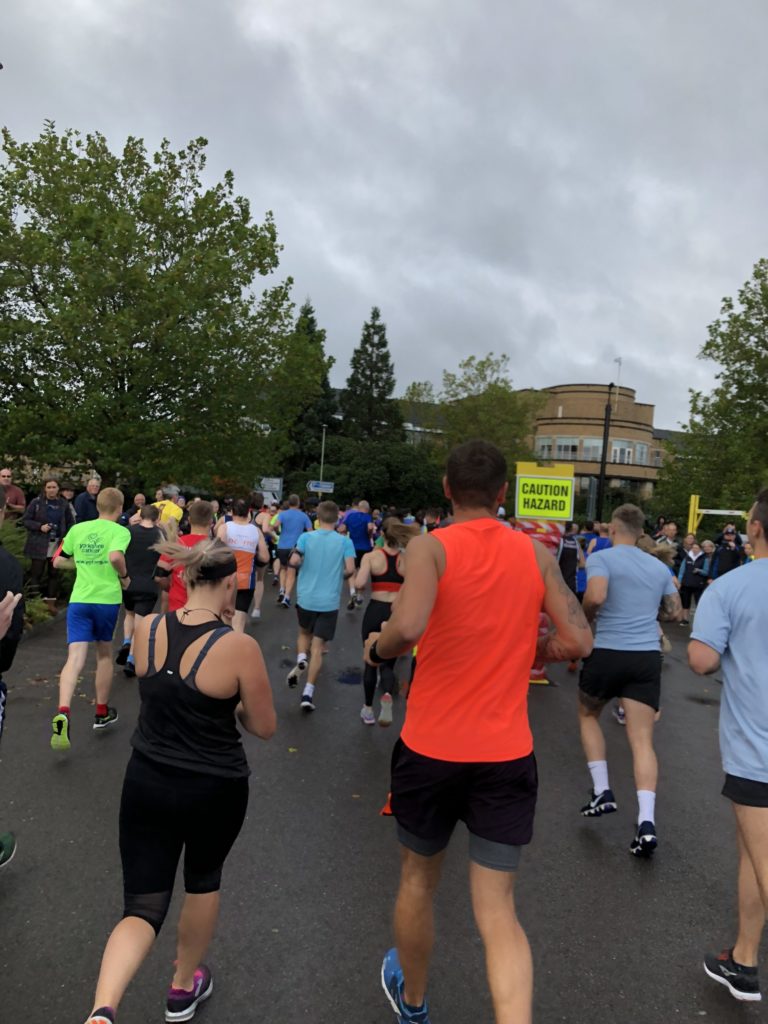 Cheltenham is a very nice route. You go through the town centre and all of the scenic suburbs and none of the less attractive areas. Because you never really leave the town, there is support all the way along the route, which is lovely. It’s nice to hear the cheers, high five the kids and spot a few familiar faces. I always like the loop around Hatherley and it was even better this time – because my daughter was there with my sister, niece and nephew.

I’m not sure exactly when it happened – it was probably not long after seeing my daughter – that I started to find it hard. I’d kind of forgotten that running a half marathon was hard. Just because I’ve run a marathon, it doesn’t actually make a half marathon any less hard.

I do run a bit faster in a race than I do in training and that isn’t easy. My legs felt tired and heavy, I was lacking a bit of energy and I felt a bit sick. I think I’d drunk too much water. A couple of times recently when I’ve trained in the heat, I’ve rationed my drink too much and felt bad for not drinking enough. So I went the opposite way on the half marathon. 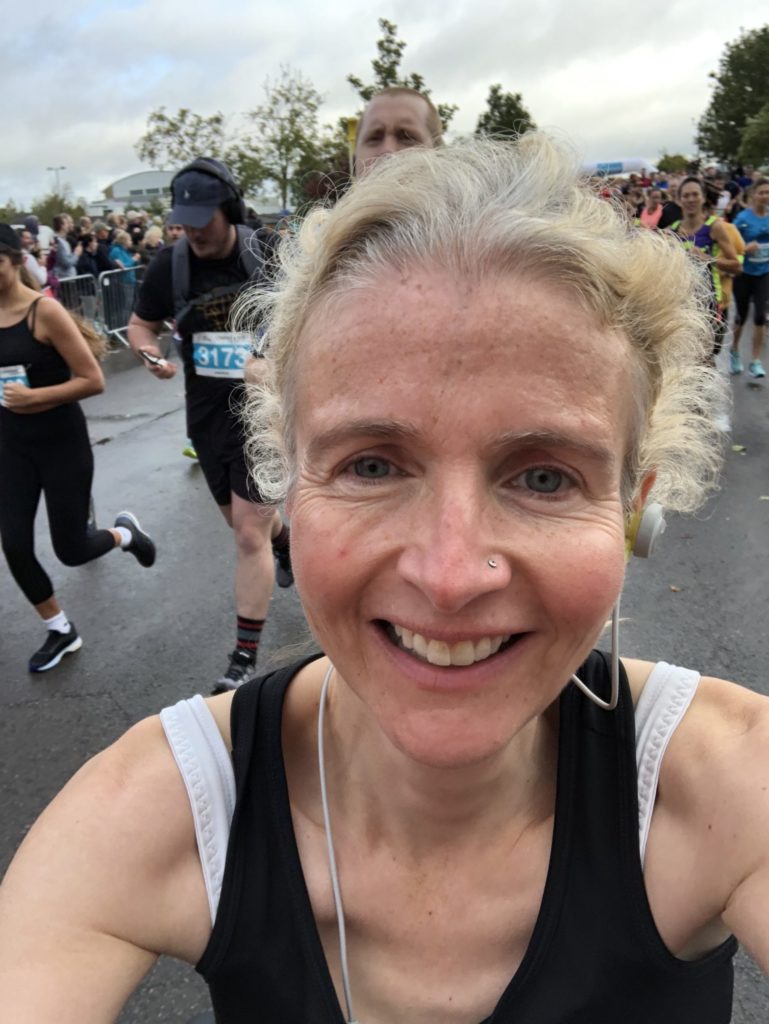 From Hatherley, the route goes back into the town centre and along the Honeybourne Line – a footpath and cycle path along a former railway line, with lots of interesting artwork from Cheltenham Paint Festival. Then you’re back in the Pittville area of town which is very close to the racecourse and the finish line. But you’ve only run just over eight miles. At this point, I saw my friend Joy aka Pink Oddy, who was volunteering on the water stop. And I drank yet more water I didn’t need.

At around 10 and a half miles, the route goes onto the racecourse. My family were there in the entrance (my younger son had joined them by this point) to cheer me on. But generally, the racecourse is always a real low point. Because it is so open, the wind was much stronger. You can see people running in all directions – it’s hard to know who is in front of you and who is behind. Of course, people were already finishing – in fact some people had finished 20 minutes earlier.

I tried my motivational ‘there’s only a parkrun left!’ message to myself, but I just felt crap. The urge to walk was overwhelming, but I told myself to keep going, it would soon be over. You would think a racecourse would be flat. It isn’t. And it’s got some horrible uneven surfaces. And there’s no supporters out on the track. Running and dehydration mess with your head. I told myself I would be finished in 20 minutes, but it was actually about 12. There was no chance of a PB, but I was probably looking at about 1:50, which is pretty respectable.

I crossed the line in 1:50:53. It was so much harder than I’d expected it to be. But it was my second best time at Cheltenham – and I was 12th in my age category, which is not bad at all.

My husband and brother-in-law both got their PBs, although my husband felt worse than I had. Apparently he was as white as a sheet and swerving by the time he crossed the line. My brother-in-law was waiting for him and wondered if he would need to ‘do a Brownlee’ and help him across the line.

But I do know I will be back next year! 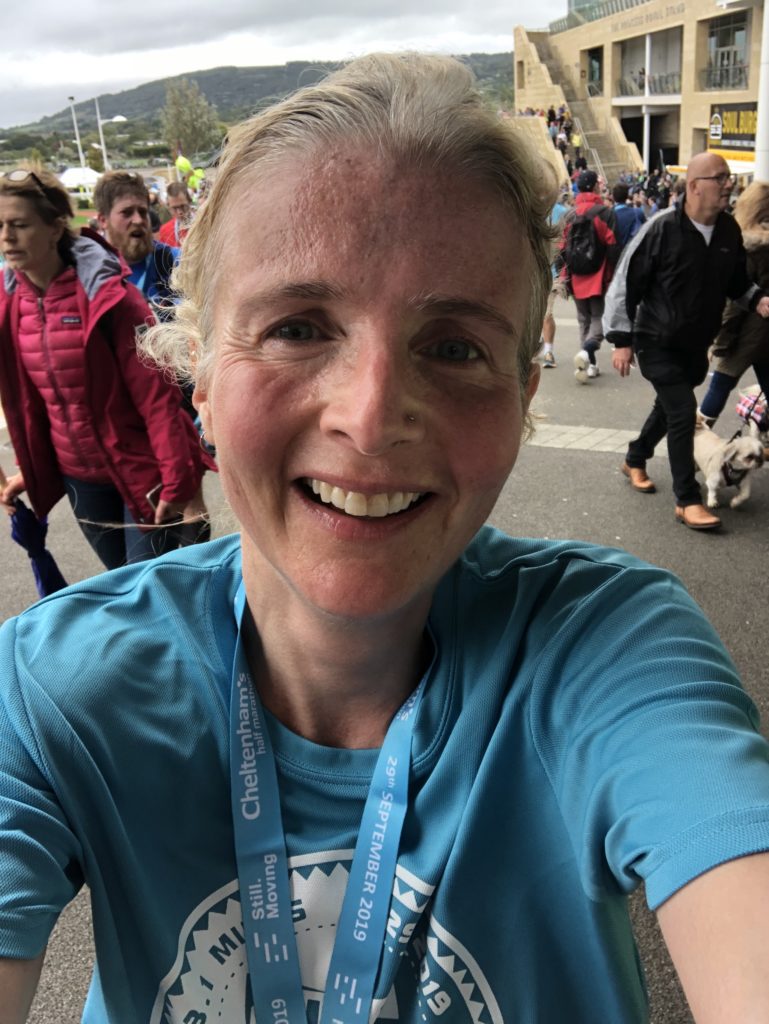