Marathon recovery and Tewkesbury half marathon

I had no idea how I would feel after Newport marathon – other than tired! As soon as I stopped running, my legs ached like they’d never ached before. My brother-in-law had finished a few minutes before me and was feeling exactly the same. He was also indiscriminately shovelling the entire contents of his carrier bag into his mouth, without really thinking about what he was eating or drinking. I just wanted to eat chips, but the queue in KFC was ridiculous and I couldn’t find a McDonalds. I settled for an M&S sandwich.

We limped back to the car and put a few more clothes on. We stopped at a service station on the way home (and I got my chips!), then we both suddenly felt desperately cold.

When I saw my mum, she said I looked ‘thin’. Then she looked at my brother-in-law and realised he looked exactly the same. We were both hunched over and still very cold. I wore my coat in the house for a while.

I fell asleep at 9pm and was sure I would have the best night’s sleep – after waking at 2.54am and running 26.2 miles. But I woke at 10.20pm with my legs in agony and saw every hour of the night after that. I’ve never been kept awake by aching legs before. My brother-in-law had exactly the same night’s ‘sleep’ as me.

I take all my marathon advice from Dr Juliet McGrattan, who told me it would take a few days to recover. The next day, my legs were still aching badly. My stomach was unsettled and I had a general feeling of being slightly ill. The slightly ill feeling carried on right until Thursday and my legs ached until Wednesday.

No doubt the ill feeling wasn’t helped by my bad cold, which I realised was sinusitis. I still had a bit of a headache on the morning of the marathon and took some paracetamol just before I ran. I also blew my noise several times during the run. My nose always runs when I was run, but this was different – this was a cold that needed clearing. The congestion carried on a couple of days after the marathon too.

I went for my first run on Thursday and hoped to manage nine minute miles (faster than marathon pace, slower than my normal pace), but my legs still felt a bit stiff and I didn’t quite feel up to it.

So what’s the best thing to do a week after a marathon when you’ve only just recovered?

A half marathon, of course!

I ran Tewkesbury half marathon last year and really enjoyed it. I even got a PB. I wanted to do it this year, but thought it was impossible as it was a week after my marathon. But I ran only two days after my 22 mile training run and ran five times in the week that followed, including a 12 mile run a week later. Even Dr Juliet said it would ‘probably’ be OK. I wasn’t planning to run it at my normal pace. My main aim would be to get round safely, but if I could manage under two hours, I would be happy.

My husband decided to run the half marathon too – and he even decided to run it with me. In the past, we’ve always run on our own, but we have been running together on a Sunday morning for the last year now, so running the half marathon together seemed to make sense. We are both realising that running doesn’t always have to be about running your absolute fastest, and sometimes you can slow down a bit and enjoy it. 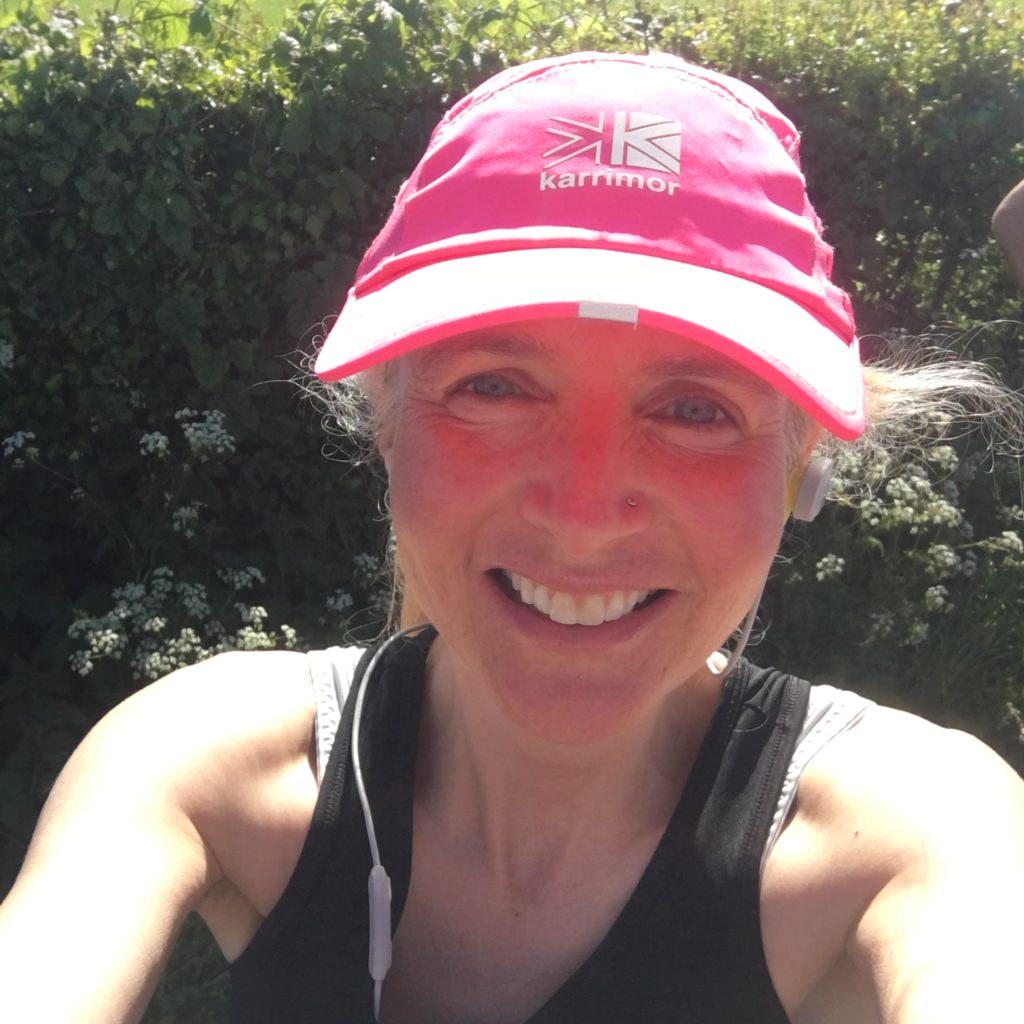 The morning of Tewkesbury half marathon was warm and sunny, so none of my usual wardrobe panics. It’s a low-key start – the race village is in a field behind council offices and the start line is 10 minutes up the road, by a pub car park. There’s no archway to pass through, just a ‘start’ sign, similar to parkrun.

My aim was to run at a nine minute/ mile pace, but of course I started off running too fast. I soon settled down and ran through the town. It was amazing how quickly the mile markers came along.

I’d remembered the Tewkesbury half marathon as being a lot of countryside, but actually the first four miles are through the town and residential areas, with a few people cheering, and lots of kids handing out sweets. With it being so hot, I took water from all the water stops and tipped plenty of it over myself. 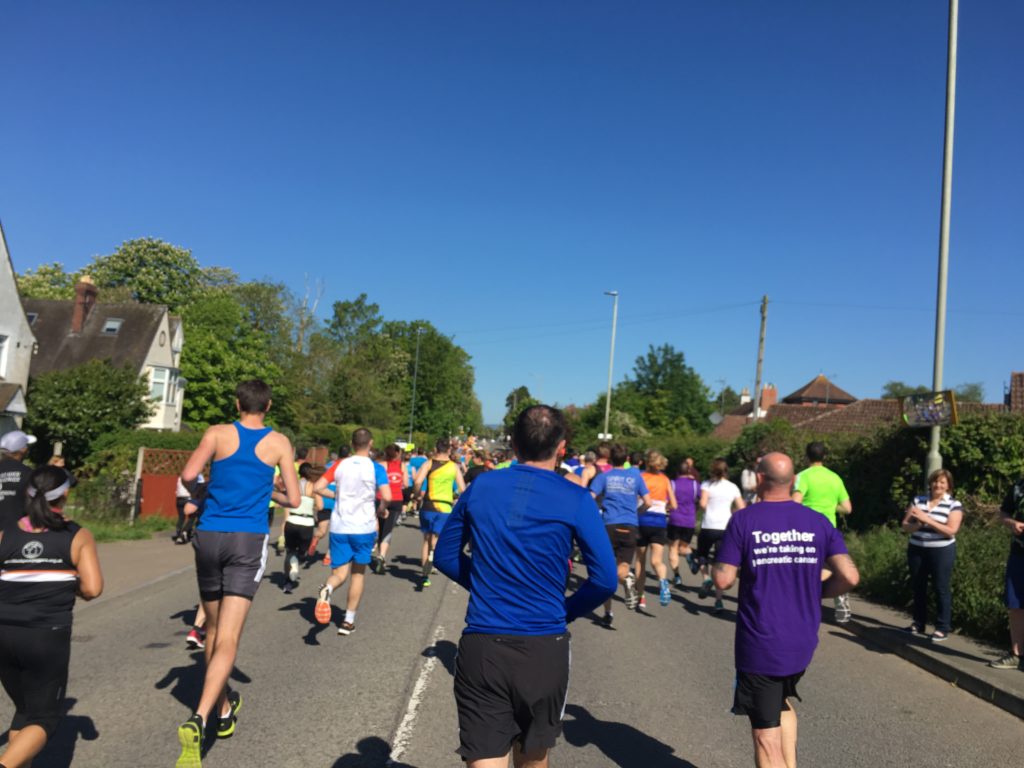 My legs didn’t feel so good between six and seven miles, and I had a few moments of questioning whether I’d done the right thing by running a half marathon so soon after a marathon. But they soon felt better, and we ran on through the countryside and the villages – out of Gloucestershire, into Worcestershire and back again.

After running a marathon and training over such long distances, a half marathon felt very quick indeed. Before we knew it, we were at nine miles, then 10 miles. A hill I’d remembered as being very steep was nowhere near as steep as I’d remembered. The more I ran, the stronger I felt.

We quickened up the pace a bit after 11 miles and started overtaking a lot of people. There’s a very nice downhill around 12 miles, which takes you into the town.

The race ends in the high street and there’s only barriers on one side. The crowds get really close to the runners and there seems to be far more of them than there are runners. With the sun shining and the crowds cheering, it feels like the best finish – none of the boredom of Cheltenham racecourse or the very wide roads of Newport marathon.

We crossed the line in 1 hour 56 minutes and 52 seconds. And I loved every minute of it.

Was it right to run a half marathon a week after running a marathon? Definitely! 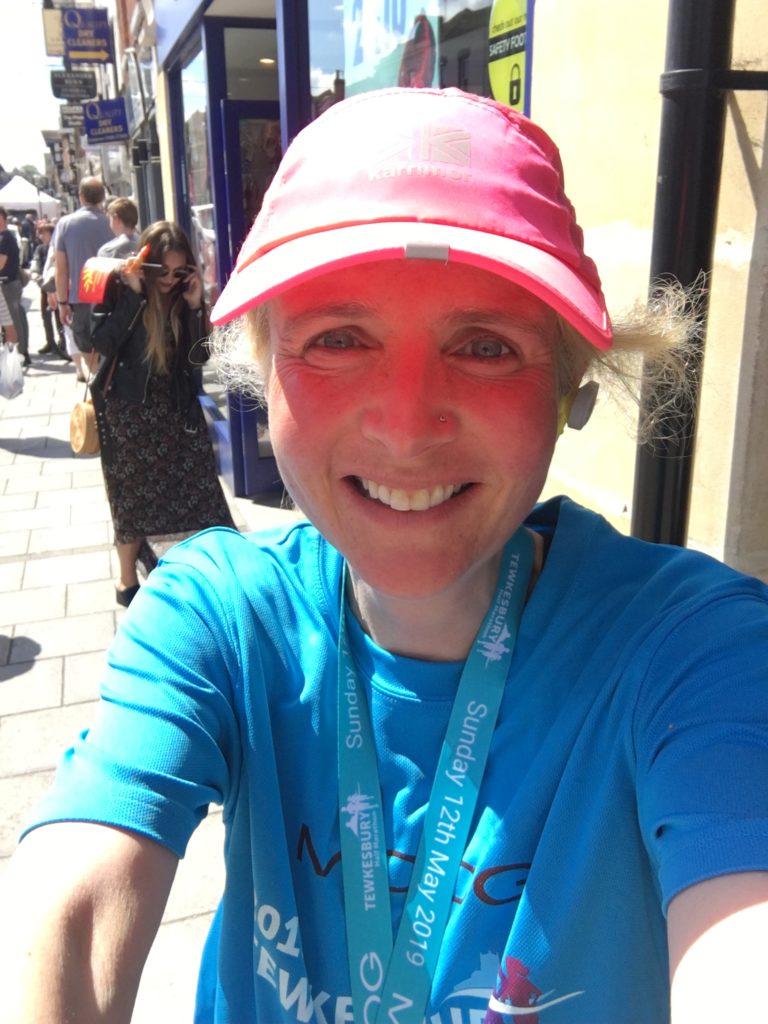