The avulsion fracture and recovery part 1

Earlier this year, my son suffered an avulsion fracture on his pelvis. Avulsion fractures are usually related to sport and are more common in young people who are growing quickly. When young people have their growth spurt, their bones grow faster than their muscles. So then their muscles are tight and they have to catch up with the growth of the bones. My son’s fracture was caused by pulling a muscle while doing long jump, which pulled his bone away. He was in a lot of pain and was taken to hospital by ambulance.

He was told the treatment was crutches and that he would be out of sport for three months. Three months out of sport is a lifetime for someone like my son. He would miss the national athletics competition he was so happy to qualify for, plus the first month of the rugby and football seasons.

When the doctor told us it would be three months for a full recovery, I wondered how we would manage on our holiday in Nice only a month later. He would need to take his crutches, of course. I imagined we would have to take it in turns with going out for a few hours and staying close to the hotel with my son. He wouldn’t be able to move around much. Then we had a long weekend to Padstow in an airbnb booked. It was in a ‘loft’. The stairs would be steep. Did we need to cancel it?

He used to go for a walk every evening with my husband and I. We would have to stop the walks for a while, because it wouldn’t be fair to go without him.

We’d assumed my son would sleep on the sofa for a few nights after his accident, but he made it up the stairs on the first day. He had to sleep in the spare bed, as his own bed is a very high one up a ladder. He needed a lot of help to get out of bed the next morning and had to get up and down from a chair very slowly and carefully. But as the day progressed, he started walking more confidently with his crutches. Then he walked a few steps without them, being very careful to put minimal weight on his bad leg.

I had to remind him that the crutches were TREATMENT, not just a way to help him walk. He had no plaster, nothing holding the bone in place. The only way for it to heal was not to use it. The crutches had to replace his leg.

Two days after the accident, he went to school. When I’d seen him in so much pain in hospital, when the only way to move him was using a board from bed to bed, I’d questioned whether he would even make it back to school in year 10.

Three days after the accident, he returned to the stadium to watch his sister in her first athletics competition. He got around mainly without crutches. In total, he walked over 4,500 steps that day.

Also that day, he went back to the hospital where he was told that both the bone and the muscle needed to heal. He was referred for physio and would be able to start gentle exercise when his leg stopped hurting completely. I realised there is a blurred line between ‘exercise’ and ‘sport’. Apparently swimming and cycling fall into the category of ‘exercise’, whereas long jump, football and rugby are (of course) most definitely sport.

Four days after the accident, he made it up the ladder and back into his own bed.

By the end of the first week, the only pain in his leg was on lifting his knee, and he was able to walk without lifting it very high. He was walking most of the time without crutches and actually walked an incredible 12,000 steps in a day. He could get down the stairs normally and could get in and out of the car without physically lifting his leg with his hand.

The only thing that really bothered him was sneezing. Sneezing sent pain shooting through his hip and left him breathless. He would need to take a few minutes just to breathe slowly until the pain had passed. He was a bit stiff and achey when he first woke up in the morning, but it gradually eased as he got moving. He hadn’t taken a painkiller since the day after the accident.

You can read parts 2 and 3 of my son’s long road to recovery and sport here. 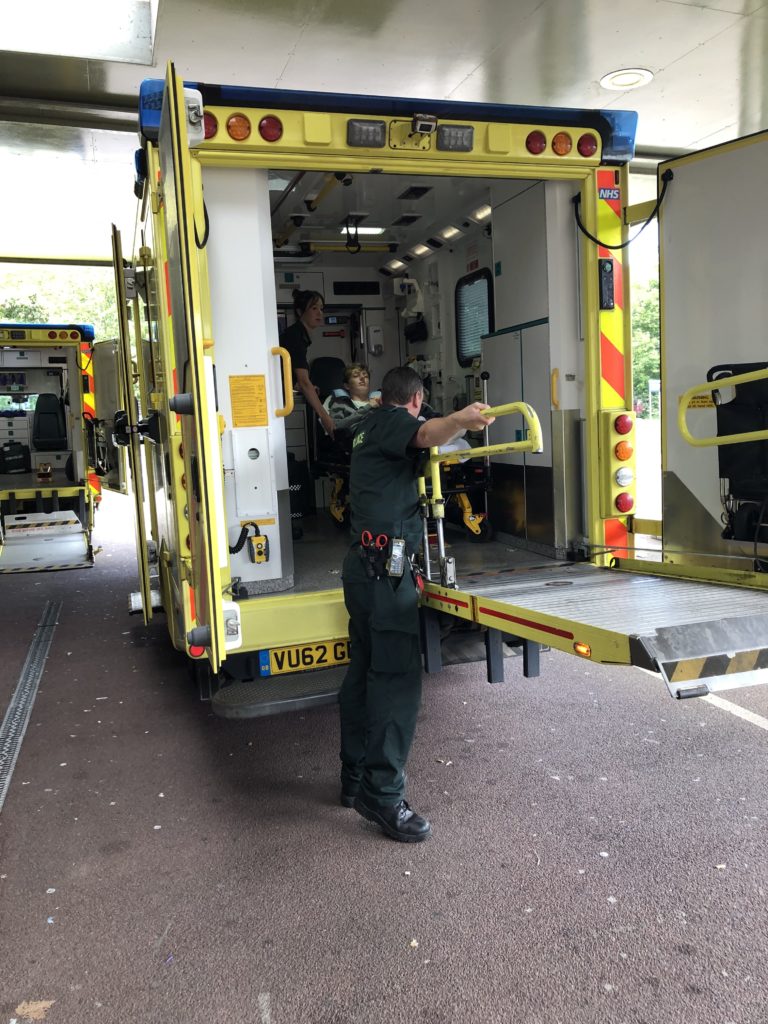