Today, my beautiful younger son turns 15. He was born exactly four weeks after my 30th birthday, which means he has been a part of my life for a third of it. Which sounds like a really long time. On the one hand, I can’t remember or imagine life without him and on the other hand I’m amazed that he has been around for so long.

Over the last year, the main thing my boy has done is to grow. This is the year he’s turned from a boy into a man. He towers above me and is constantly needing new clothes. This can be a bit of a nightmare. He doesn’t know what he likes, only what he doesn’t like. He doesn’t like shopping and won’t engage in looking at a pair of trousers for more than a few seconds at a time. He has only just stopped wearing shorts, which he wore every day from the start of May. My husband managed to buy him one pair of trousers that he reluctantly agreed to, which he now wears every day. Why on earth didn’t he get him two or three identical ones?

Somehow, despite being very slim, my son needs a men’s medium size in jumpers, just because his arms are so long. His shape has changed too – his shoulders are wider, although his arms are still very thin, much to the amusement of his dad, brother and all of his sporty friends.

Puberty does funny things to people. For my boy, it has made him more beautiful. He is shaped like the perfect sportsman, with defined cheekbones and hair that shines like gold in the sun.

He continues to shine in all of his sports – football, rugby and athletics (specifically long jump). This year, he was both the school football team and the club team’s top scorer. He won awards for player’s player from school and most improved player from his team. He has got stronger and faster in rugby and has started training with the local club one evening a week. He has also broken his nose probably three times this year alone. In long jump, he beat his PB from last year by over a metre and his current PB of 5 metres 58 puts him in the top 100 nationally for his age group. And his school awarded him with the players’ player certificate for athletics too.

He has just started his GCSE courses. In addition to the six compulsory subjects, he’s doing German, geography, art and PE. Needless to say, he’s loving PE and is working hard at art. I’ve been impressed with the effort he’s making with his compulsory subjects too. He’s tried hard to improve his hand writing (not that it was bad before) and note taking, so his books all look immaculate!

A lot of the time, my 15 year old boy is a joy to be around. When something sparks his interest, he is so full of enthusiasm, it just warms my heart. You never know what is going to capture him – a story from school, something on the radio or a silly joke from his dad – and suddenly he will really come to life.

But he’s not perfect, far from it. He is the most stubborn person I know. If he doesn’t want to do something, there’s no way he’s going to do it! And there is a lot of things he doesn’t want to do – from school work to cleaning the guinea pigs to sorting out his D of E (which he still hasn’t completed, due to his stubborn nature and lack of motivation).

He spends nearly all of his time in his room, staring at multiple screens. At all times he will be playing a game on his Switch (usually Fortnite these days), watching a video on his iPad (either about gaming, science or something funny) and looking at memes and messaging his friends on his phone. But don’t ever ask him to message his friends about anything useful like lifts to rugby or sorting out the D of E, because it won’t happen. He used to sit under the steps of his bed, then he moved to a beanbag. This year he’s graduated to the desk my husband bought him for his homework. He would sit there 24/7 if he could, stepping away only to play football or rugby. The latest I’ve caught him there was 2.40am, thankfully in the school holidays.

This year, we’ve managed to get my son out of his room a bit more to watch TV with the family. I realise that the TV is still a screen, but watching with the family is far more sociable. He loves Bake Off and Extra Slice and has a love-hate relationship with The Apprentice – he has to frequently leave the room because it makes him cringe so much. Sometimes he literally rolls around the floor cringing. We’ve also introduced him to crime dramas this year, and he watched Bodyguard and the third series of Unforgotten with us. He then went back and binge-watched the first two series of Unforgotten.

One thing that will make him come out of his room is food. Like his brother, he snacks constantly on carbs. He always has a bowl of Coco Pops before bed and has several custard creams a day, but his absolute favourite thing is dry bread. He can often be found wandering around with a slice of bread in his hand and he even likes the crust, which is a win as it always used to get left behind. Unfortunately, he’s not so keen on his meals. He will eat what’s put in front of him, but will generally dismiss most things as ‘mank’ or ‘trash’. I’m the first to admit that our meals aren’t always great, but he won’t ever tell us what he would like to eat instead.

He’s a nightmare to get out of bed every day, apart from Saturdays, when he will happily jump out at 7.15, enticed by coffee with his dad.

So he’s stubborn, he spends too much time on screens and he can’t get out of bed. He really is a typical teenager in many ways. This was the year he also decided to follow in his brother’s footsteps and decide that both Padstow and the Wychwood Festival are ‘boring’.

My boy is growing up fast and I wouldn’t have him any other way. He makes me proud every single day. 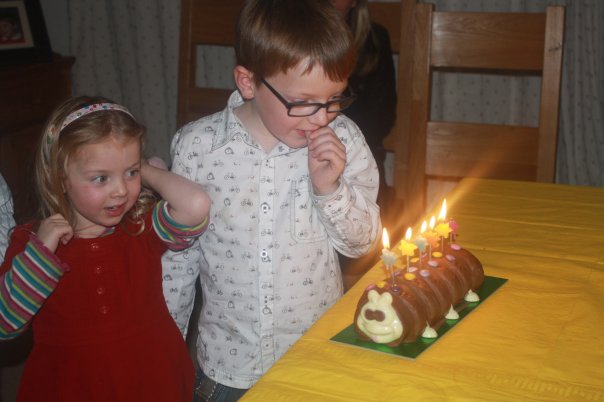 Celebrating his birthday a few years ago…