Every year, my younger son’s school (like most secondary schools, I believe) holds a sports celebration evening just before the end of the school year. It’s a lovely, informal evening for kids and parents to celebrate all of the school sport that has taken place over the year.

Every team captain in years 7 to 10 gets up on stage to give a short talk about their season. And that is A LOT of team captains. Think of all the different sports – rugby, netball, hockey, football, plus lots of smaller sports too. Some sports have both boys’ and girls’ teams. Some sports have A, B and C teams in a year group.

For each team, just one certificate is given out. The players’ player award. As it says, this is voted for by the team themselves.

My son was in four teams for 2017/18 out of a possible five – rugby A, football A, athletics and basketball. He said he was good enough to play for B team cricket, but he really doesn’t like cricket, so he doesn’t play.

We’d already booked to go along for the evening because I really enjoyed it last year. But, a few days before, we got an email informing us that my son was to receive a players’ player certificate and we weren’t to tell him. How exciting! They didn’t say what sport it was for. My feeling was that it would probably be football, as he’d scored so many goals in their short season. Of course football is about so much more than goals, but that’s what kids tend to notice. He’d come on leaps and bounds in rugby last season, but I doubted it would be enough for his friends to vote for him. And I didn’t even think about athletics.

He didn’t win the award for rugby. As predicted, it was for football. He walked to the stage to collect his certificate with the classic teenage expression of both chuffed and embarrassed.

Then we settled down to watch the rest of the presentations. And we got a big surprise.

He didn’t just win one players’ player award. He won two. He got it for athletics too.

I think he was the only person to get two awards. I was so proud of him and so pleased for him.

My son’s sport, particularly his athletics, has come on a long way this year and he is undoubtedly in the top four or five sportsmen in his year. But he’s had a bit of a feeling of ‘always the bridesmaid, never the bride’ with his sport this year. He wasn’t made captain of the football team. He was overlooked for a big athletics competition that some of his friends were picked for. His teachers didn’t acknowledge that he’d taken part in the regional athletics competition. He felt the captaincy of the athletics team should have been reconsidered for year 9, but it seems it was set in stone from year 7.

So it was lovely for him to get that boost from his team mates. 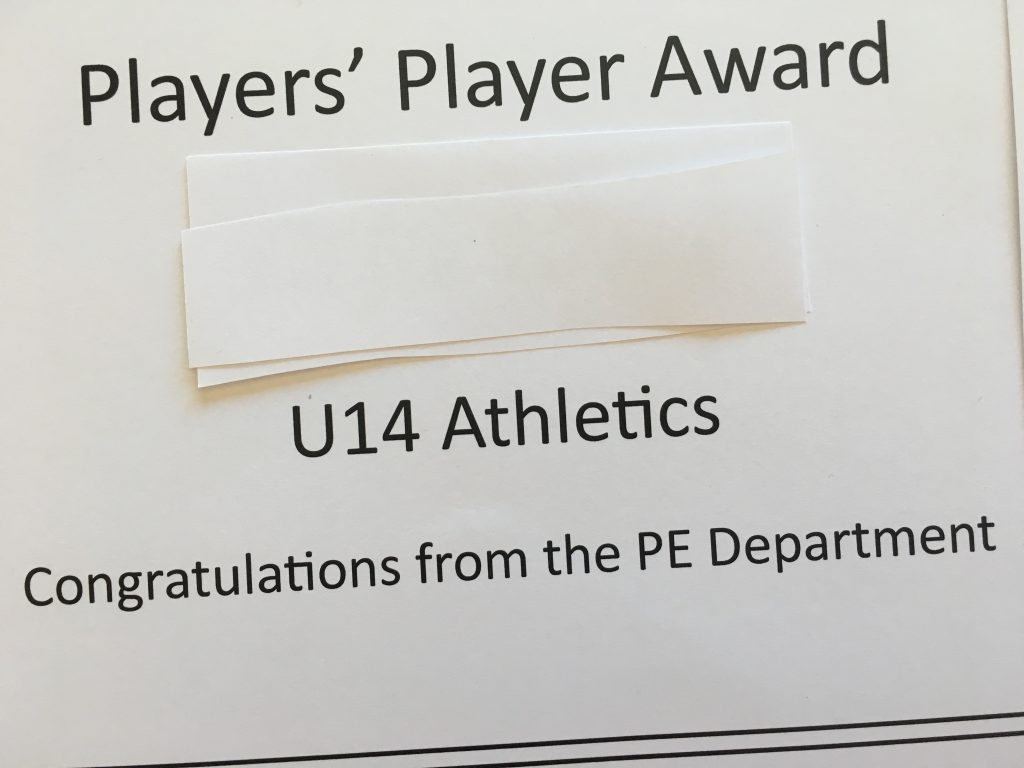