I’d been feeling emotional for a few days about the end of primary school for my daughter – and the end of 12 years of primary school for myself. But I hadn’t cried. I was saving that for the leavers’ assembly. On Thursday, we had our last walk home from school together (because Friday would be an unusual day) and on Friday our final walk to school together. Then I stayed for the leavers’ assembly.

All of the Year 6 parents are invited to the leavers’ assembly and all of the kids from the whole school are there too. It’s a chance to celebrate Year 6 and everything they’ve achieved and to wish them hope for the future.

I wasn’t sure how my daughter was going to react to leaving school and the leavers’ assembly. My eldest hadn’t cried at all. Whereas my younger son was the first person to start crying. I suspected my daughter would be like my younger son, who was facing being the only child from his primary school going to his secondary school. My daughter only has one other girl from her year going to her school.

Year 6 were the last people to enter the hall. And a huge spontaneous round of applause broke out. I could already feel the tears starting to gather.

Every year, each child shares a memory – either first memory, most embarrassing memory, favourite memory – or their hopes and dreams for the future. My daughter shared a first memory and, amongst the memories of crying on their first day and getting locked in the reception toilet, it stood out as being something rather gross and unusual. It wasn’t her that was gross, but she suffered for someone else’s grossness. It certainly raised a laugh among the parents.

After each set of memories, a couple of trophies were awarded – there are eight in total and I can’t quite remember what they all are. There is nobody particularly musical in my daughter’s year and when they announced that the winner of the music trophy played the violin, I thought it could be my daughter. But it wasn’t. Both my husband and daughter said they hadn’t wanted her to win that one (but of course there was no guarantee she would win any trophy). Then they described the winner of the ‘compassionate’ trophy, which my eldest won five years ago. They were describing my daughter exactly. But it went to my daughter’s best friend.

The teacher in charge of Years 4 to 6 had never taught my daughter, but he’d taught the other class. He gave an overview of some things that had stuck out in his head over the years from this year group. Mainly quite little, quirky things. He asked us all to applaud the three kids who’d started school unable to speak a word of English. And he described how somebody had got 100% in their maths SATs and what an amazing achievement it was. Only one child did it this year and only one had done it last year. Since the SATs had changed, I don’t understand the marking system. I know my younger son got Level 6 in his, which was an incredible achievement, but it’s all different know. My daughter’s marks had looked pretty good. I hadn’t realised she was the one child to get 100%.

I shed a couple of tears.

One teacher had taught my daughter in Year 2 and Year 4 and had also had some involvement with them as Year 6s. She too talked about the things that stood out for her from this year group – mainly of the less able kids conquering their difficulties. Then she named three girls together – my daughter and her two best friends – for how helpful they were, how reliable, how they could always do her a lovely piece of work for the wall. These were the three kids she’d chosen for the special book when they were in Year 4.

There were more awards, some that sounded like my daughter and some that didn’t (she was never going to get improved attitude to learning and improved progress in learning, because she’d had those right from Reception). There were a couple of hymns – One More Step Along the World I Go and Cauliflower’s Fluffy, for no other reason than the kids love it. There were Powerpoints with photos of them in the infants and another one with photos from Years 3 to 5.

Then there was the award for presentation of work. And my daughter’s teacher described how it was more than just neat handwriting and neat books, it was about how somebody presented themselves. Anyone who knows my daughter knows she presents herself very well – always a smile, always looking immaculate. But if anyone came into school needing to see some books, they always showed them ‘this person’s’ books. My daughter. Of course it was.

There were eight trophies in total. Of my daughter’s close group of six friends, four of them won a trophy. They are all such lovely girls and I was proud of them all.

Their old head teacher had sent them a video message telling them to believe in themselves and that they could achieve whatever they wanted. It reminded me of what an amazing head teacher he really was. The acting head talked about how he’d known 20 Year 6 cohorts over the  years and they were right up there with the best. That got me and I think it got my daughter too.

Then there was a lovely Powerpoint of Year 6 and all the amazing things they’d done, including their residential. It was set to Seven Years, the song my daughter had danced to at the leaver’s play. And they sang their song from the leavers’ play – ‘One day at a time, There’s no rush to see tomorrow, I know the future is mine, So I’m going to live it. One day at a time’.

And I have never seen a child cry so much. My daughter was in absolute bits. And All I wanted to do was run to her and hug her, but I couldn’t as she was right across the other side of the hall. Other kids were crying, but nobody was crying like my daughter. And I was inconsolable too. I just felt so sad for her.

I was able to console her at the end, as she took photos with her friends and they all sobbed. I always think the leavers’ assembly is designed purely to make people cry.

It had done its job. 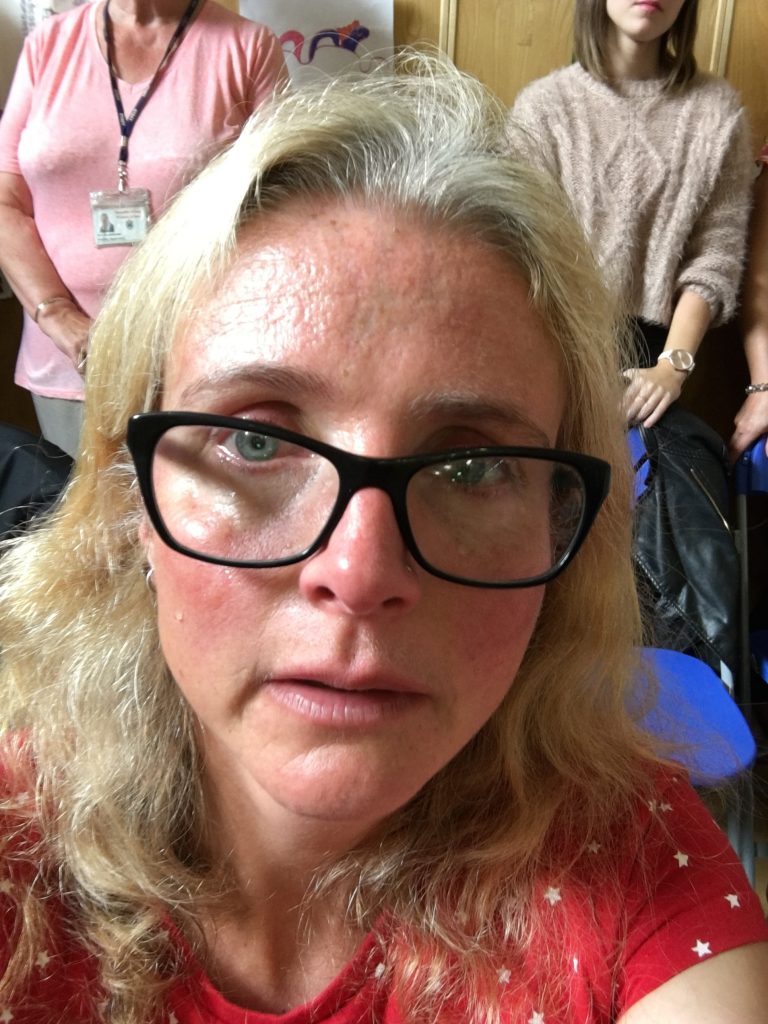