My son’s leavers’ assembly was brilliant, it really didn’t disappoint.

It started with one of the most appropriate hymns ever – One More Step Along the World I Go. The the kids all said a few words – from earliest memories (almost all about Lego), to most embarrassing memory (two pairs of forgotten pants and resulting nudity, one pant-wetting incident and one calling-the-teacher-mummy incident) to favourite memory – many of which came from their recent year 6 residential.

My son talked about his greatest achievement. For him, that was getting into the grammar school he’d wanted to get to since he first heard about it in year 1. Others talked about being brave and going out of their comfort zone on the residential, but perhaps my favourite was a girl who has always been nervous, talking about how she’d grown in confidence this year. Year 6 is great for that. Finally, a group of kids talked about their aspirations for the future – vet, paramedic or just to live a happy life. Here’s hoping they succeed in them!

The head teacher talked about how they were all unique and all had unique qualities and could do anything they wanted to achieve. He used the story of Giraffes Can’t Dance to illustrate his point, then got the whole room – from reception to year 6, plus teachers, dancing along to Happy.

Every year, the school gives out awards to the year 6s – for things like presentation of work, sport and music, as well as making progress in learning and being a thoughtful and caring pupil. There’s also an award for best all-rounder – in memory of a girl I was at school with, who sadly died shortly after leaving primary school.

My son’s best friend won the music award and I was pleased to see a better mix of boys and girls picking up awards. When my eldest won the caring pupil award three years ago, I was so proud, but also felt it was wrong that he was the only boy to win an award. The teachers said it was very hard to choose this year as they’ve been a very good cohort, which I totally believe, they really are a likeable bunch of kids.

The last two descriptions could have been my son, but they weren’t. He didn’t pick up an award and that’s OK. Awards either went to someone who had a particular skill – like presentation of work or to people who had really tried hard and made big improvements. My son tries hard, but you don’t make big improvements when you’ve been top of the class since reception.

Then the tough bit – they sang their final song from the year 6 leavers’ play:

One day at a time,

There’s no rush to see tomorrow.

I know the future is mine,

So I’m gonna live it one day at a time.

Imagine hearing those words on the day your child finishes primary school.

I looked at my son and he was gone. The first one to cry. As soon as he went, I went. I didn’t bother to hide it, the tears just rolled down my face. Then all the kids around him started to cry and so did all the parents.

The assembly finished with a lovely powerpoint presentation of year 6 – and not a mention of SATs. It showed just how much fun they’d had, despite the hard work – trips and art projects and dressing up. There wasn’t a single miserable face on the photos. Lots of the photos were from their year 6 residential – jumping in the sea, surfing and covered in mud right up to their necks and always smiling. I would have been willing to put good money on the soundtrack including See You Again, but it was more upbeat with Uptown Funk, although Greatest Day and You’re My Best Friend could have got the tears flowing.

When the assembly was over, the kids went wild with phones and tablets, taking endless selfies with each other and the staff. My son was an emotional yoyo, who’d gone from floods of tears to hyper and on top of the world. He would crash later for sure, but he was enjoying his last few hours as a primary school pupil.

My son and his friends have been lucky to be at such a brilliant school and to have had such amazing teachers who have supported them to achieve their very best and have the best time at primary school.

For the kids, the school will be badly missed. For me, I’m grateful that I will still have another two years there with my daughter. 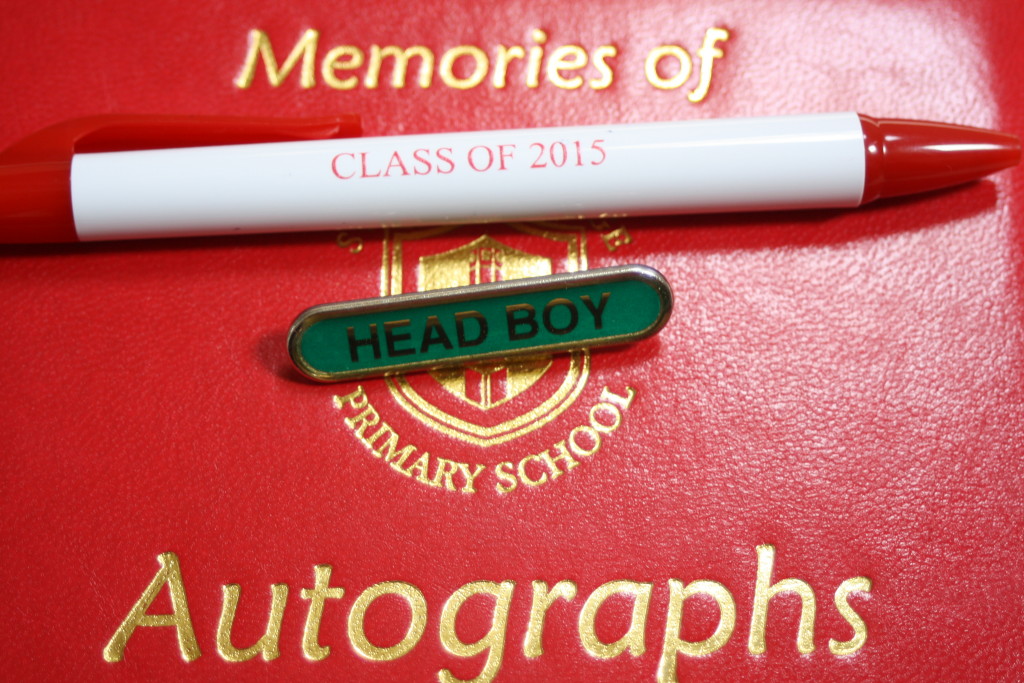