Over the last two or three years, our primary school has introduced a number of behaviour incentives – for both ends of the scale. In the past, they gave out certificates to one person per class for doing something well that week – it could have been a good piece of work or it could just have been someone who was usually naughty behaving themselves a bit better. The theory was that every kid in the school would get a certificate over the course of the year. They tended to work on the principle of ‘naughty kids first’ and my kids would often be moaning in May that they STILL hadn’t had a certificate.

More recently the school has introduced special letters for exceptional behaviour or outstanding work. There is no gurantee a child will ever get one of these, and teachers award only about two per term. My son has actually had two of these and my daughter received her third just the other day. At the other end of the scale, there is detention and letters home for particularly bad behaviour – either one-off incidents or continual low-level bad behaviour.

Just before the end of term, the latest incentive was announced in the school newsletter – a book where the names of the most outstanding children would be recorded. The book would be kept in school forever and would be a permanent record for the future. The school would get in touch with parents to let them know if their child had been selected for the book. Somehow I thought one of mine would and for the next few days it was at the back of my mind – had one of my kids been selected, when would I hear?

I thought they both stood a pretty good chance, but, despite my son being head boy and getting into the top grammar school, I felt my daughter was the most likely. There’s something about my daughter and it’s hard to put your finger on it, but she’s something special. Her determination and work ethic are second to none and her behaviour is impeccable at all times. And she manages all of this while still being well-liked and not in any way geeky or weird. She has an aura. She almost shines. She is something quite incredible. She is just the sort of person anyone would be proud to call a daughter, and any teacher would be over the moon to teach. The phrase most used by teachers is ‘a joy to teach’.

And so the letter arrived. Sure enough, my daughter had been selected among the very first children to be recorded in the special book. We were invited to assembly to see her and were to tell nobody, so that it would be a surprise on the day. I hardly need to tell you that there were tears in my eyes when I read the letter.

I took my seat at the back of the assembly hall with my husband and the other parents. My daughter walked in and pulled a face which said ‘what are you doing here?’. None of the kids had any idea. The headteacher introduced the book and told everyone how each teacher has nominated a child for a special award for the term and their names and the reasons for nominating them will be recorded in the book forever. The award is for children who go above and beyond what is expected of them – in their behaviour, their attitude to work and everything else.

As he called each child up, he read the words in the book and gave them their certificate and a special badge they get to wear for the next term.  My daughter’s certificate reads: Has been recognised for beautiful behaviour and a consistently fantastic attitude towards her learning. 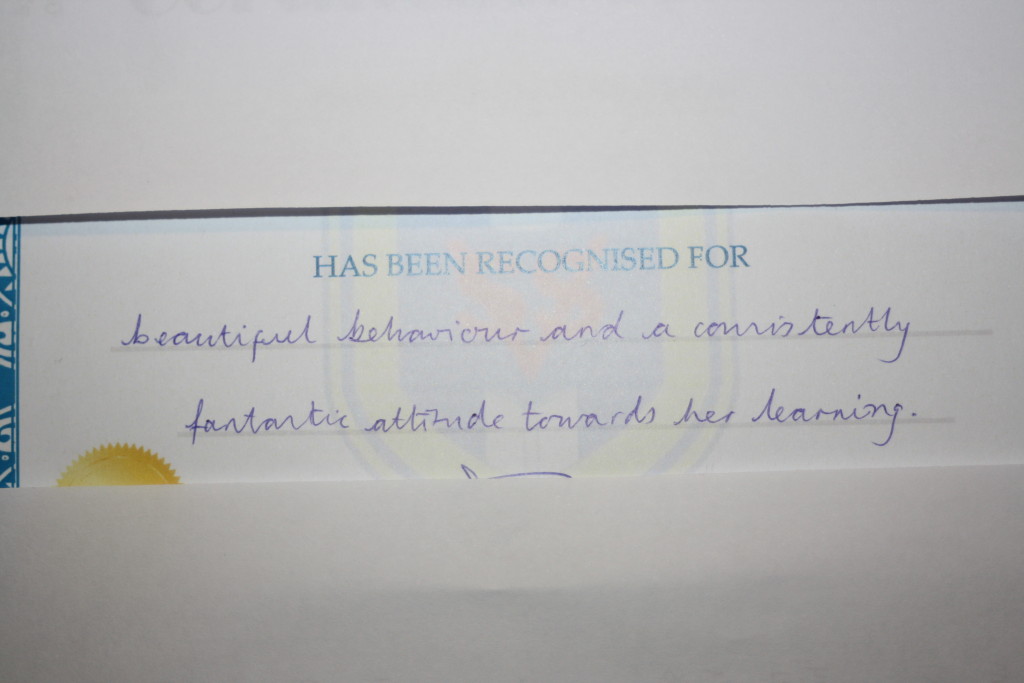 Then the head asked the individual teacher to say a bit more about why they have nominated the child. I tried so hard to remember my daughter’s teacher’s words, but she just said so much and it was all so lovely and heartfelt. It really brought tears to my eyes. She said about what a joy she is to teach, what a good role model she is to the class and to the whole of the year group. She talked about how grateful she is to be teaching my daughter for a second time (she also taught her in year 2, it’s very unusual for a teacher to teach a child at our school twice) and concluded by saying she’s a star. She said so much more and I just can’t remember it all. It felt to me as if she’d said more and with more conviction than any of the teachers.

Afterwards, several other teachers and TAs came over to congratulate my daughter and tell her how well-deserved the award was. Although she’s a confident girl, with a lot of self-belief, she was very modest and seemed faintly embarrassed about the award.

My kids have had a fair number of certificates over the years, but this one seems extra special. This one is going in a frame.

Once again, I am so proud of my daughter. She is an amazing girl.