My husband, daughter and I recently had a very good few days. It was well deserved, as my daughter has just finished her GCSEs and worked really hard for them. As I wrote recently, it feels like life is finally really getting back to normal and we can properly enjoy the summer for the first time since 2019. (Apart from my brief Covid blip.)

I’ve also discovered a fantastic life hack which I would recommend to anyone. Buy concert tickets for your family for Christmas and then reap the benefits in the summer! It wasn’t planned, but that’s how it worked out and it meant we had a very good few days…

Back last autumn, we heard that Elton John was doing his last ever tour. We’re not huge Elton John fans, but we appreciate his music and his voice and are in awe of his long career. My husband said ‘I would like to go to that’. Then it wasn’t mentioned again.

Fast forward a couple of months and I had NO IDEA what to get him for Christmas. Then I remembered the Elton John tour. And it turns out he was playing in Bristol. Christmas present sorted! By this point, we’d already sorted tickets for Ed Sheeran at Wembley for my daughter for Christmas. As I’d seen him before, I said my husband could go along this time, but he said I should go, as I’m the bigger fan.

Elton John played on Sunday 26th June. His voice was incredible. You would never have guessed he was 75. He played the piano non-stop and wore suitably Elton bling. The show was accompanied by fantastic visuals – my favourite being the miserable 70s and 80s family photos to I Guess That’s Why They Call it the Blues. 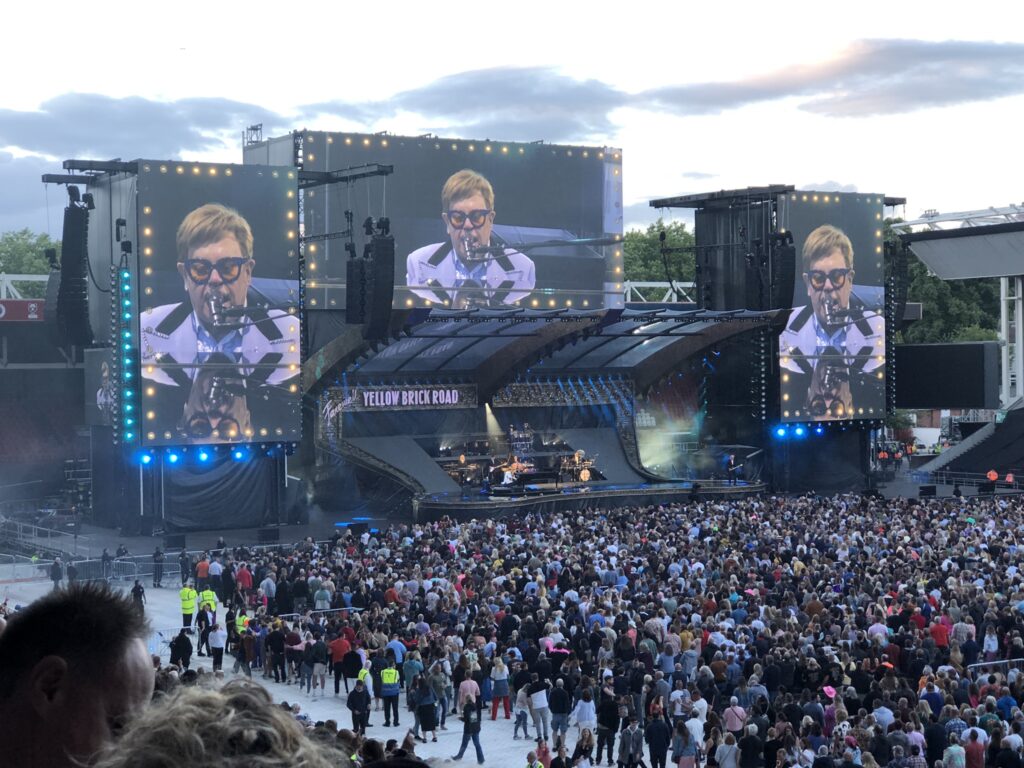 My husband said: “I expected to enjoy it, but I didn’t think I’d enjoy it this much.” 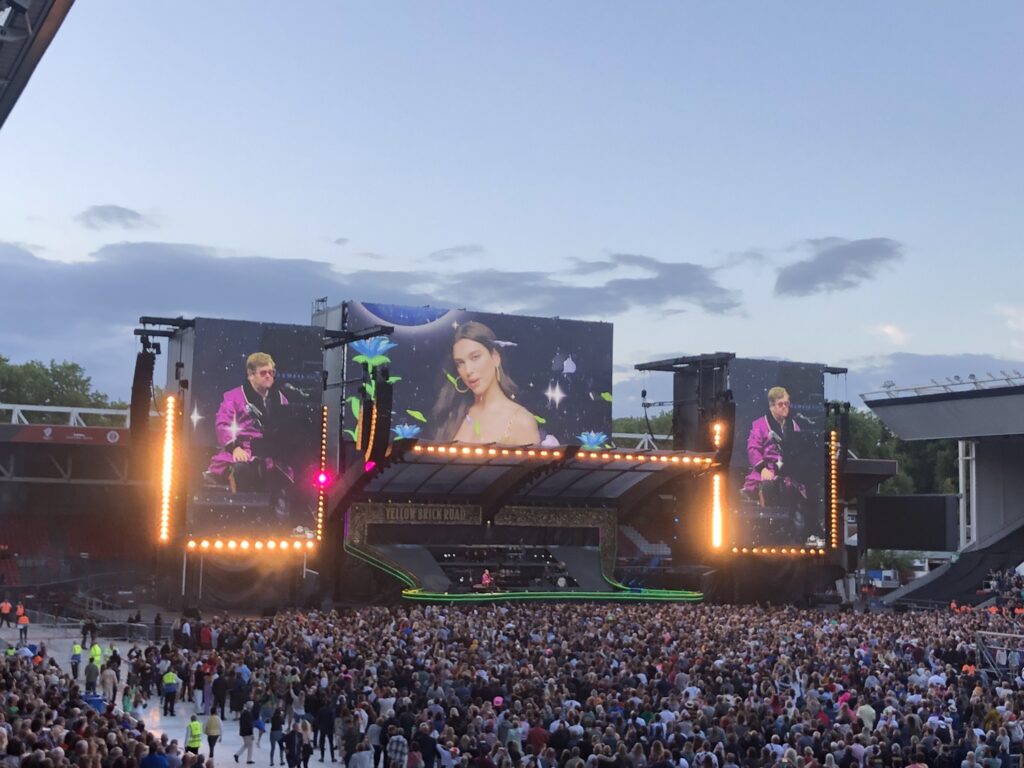 Just five days later, my daughter and I went to see Ed Sheeran at Wembley. We previously saw him at Wembley in 2018 and he was very good indeed. He was every bit as good this time, if not better. And the lighting and effects were fantastic. We were a long way from him, but it didn’t really matter as the music, his voice and the overall atmosphere was amazing. He played for two hours and it was just hit after hit. I’m so glad we were lucky enough to go. I also absolutely love Wembley itself and the surrounding area. The stadium is absolutely stunning and iconic. I never tire of it. 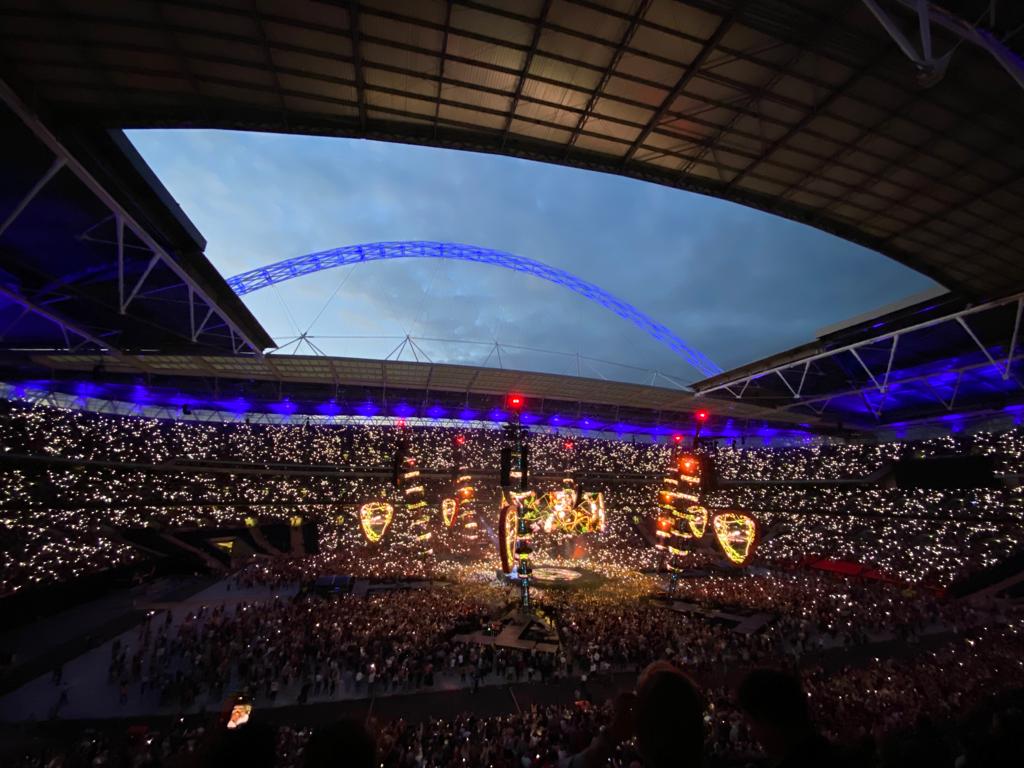 As it happens, we’d booked for the three of us to go to Disneyland Paris on the Sunday. It was a post-exam treat for my daughter and also partly to make up for her missing her school trip there in year 9. There was no point going home, so we had a day in London on the Saturday.

I hadn’t been to London since Boxing Day 2019 (with the exception of the FA Cup final 2021, when I just went to Wembley stadium and straight home again). I’d been desperate to go back. Before Covid, I would have gone to London two or three times a year.

My daughter absolutely loves musical theatre, but hasn’t seen as many shows as she would like. So we treated her to seeing Grease, which was fantastic. Although now I really wish we’d seen Frozen or Beauty and the Beast! 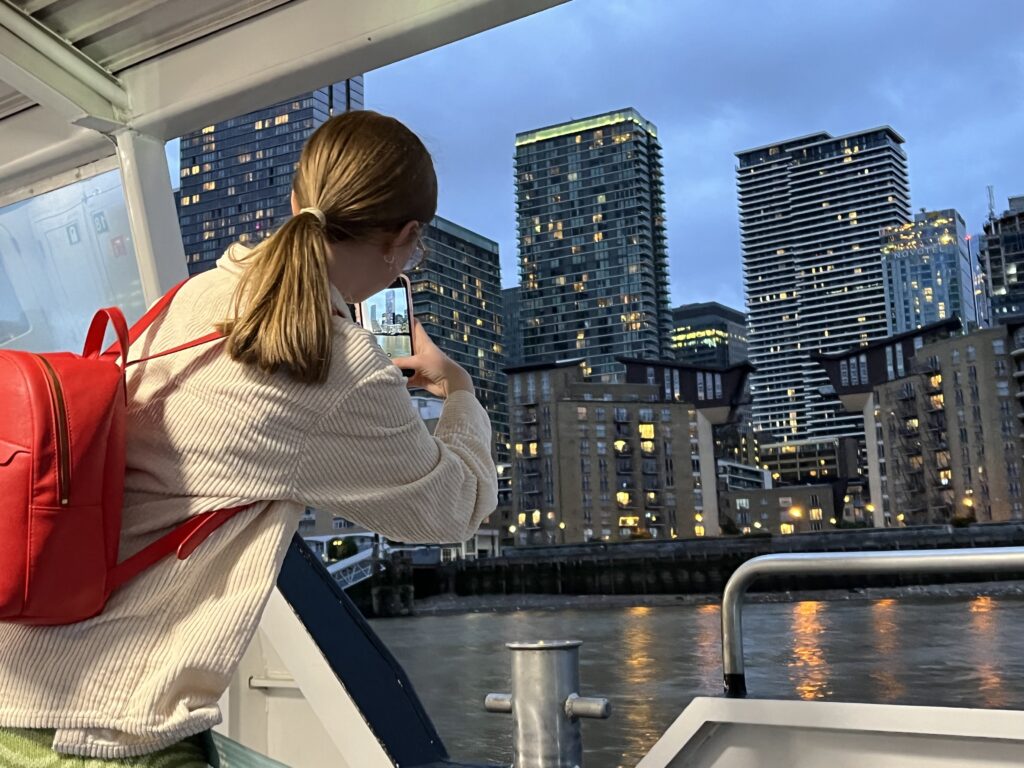 In the evening, we travelled out to the O2 on the tube and got an UberBoat back to Westminster as it was going dark. London by night is really beautiful. It certainly beats an open top bus tour! It was a fantastic experience. 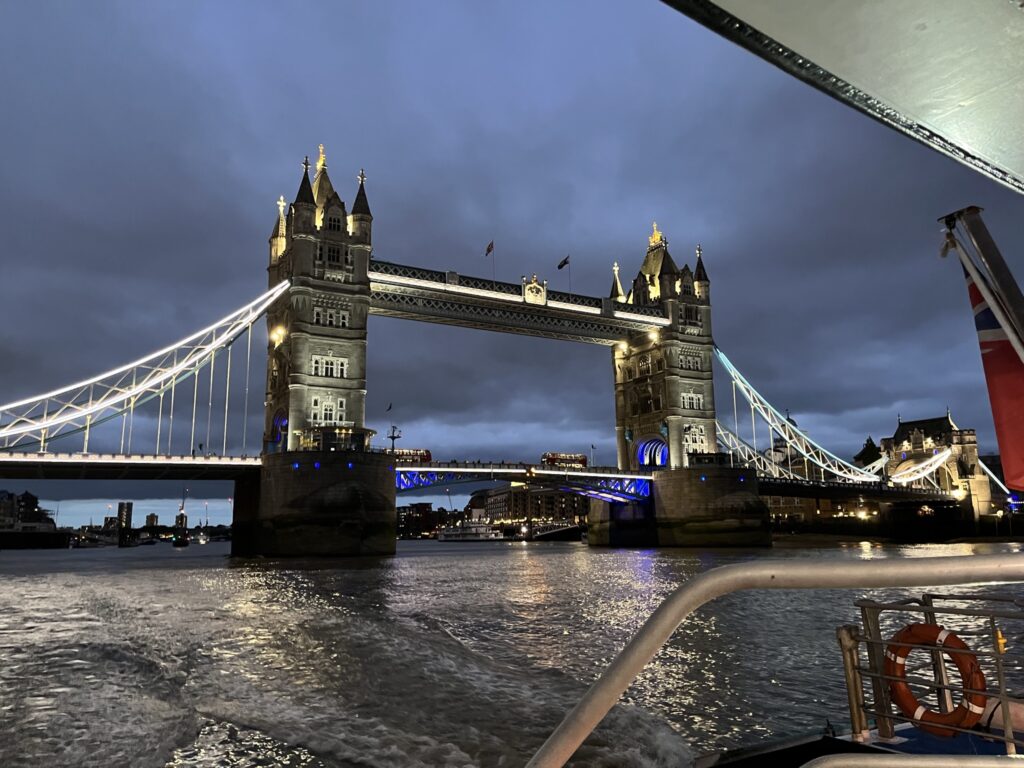 And then we got up the next morning and headed to St Pancras for Disneyland Paris. It really was a very good few days… 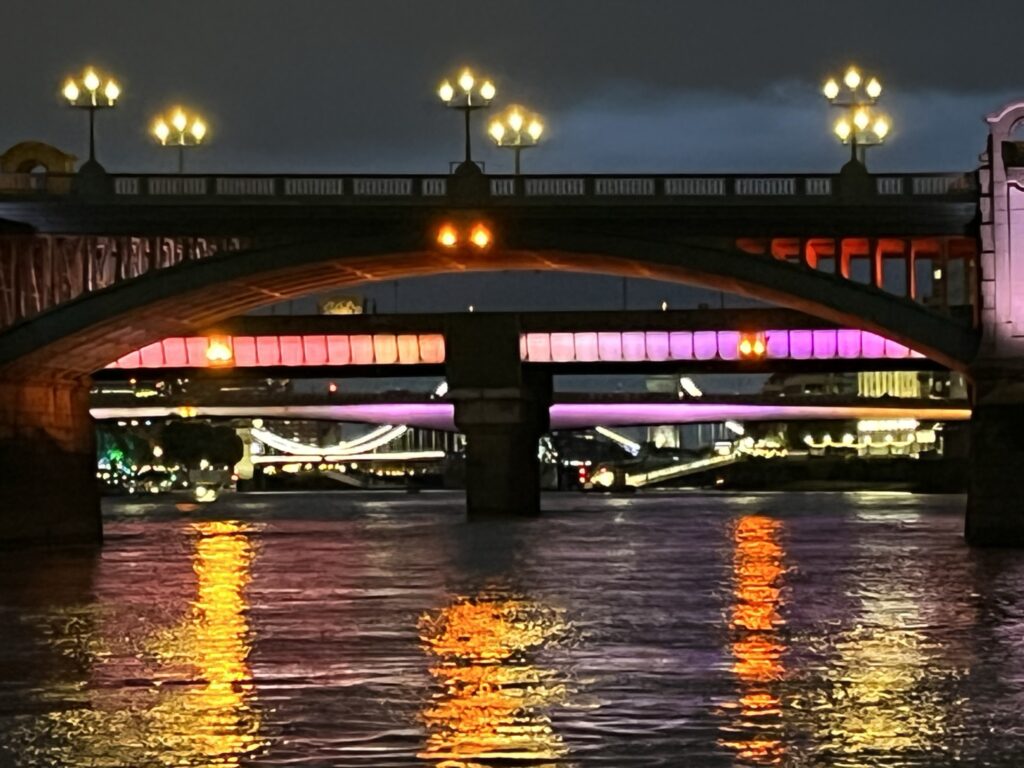 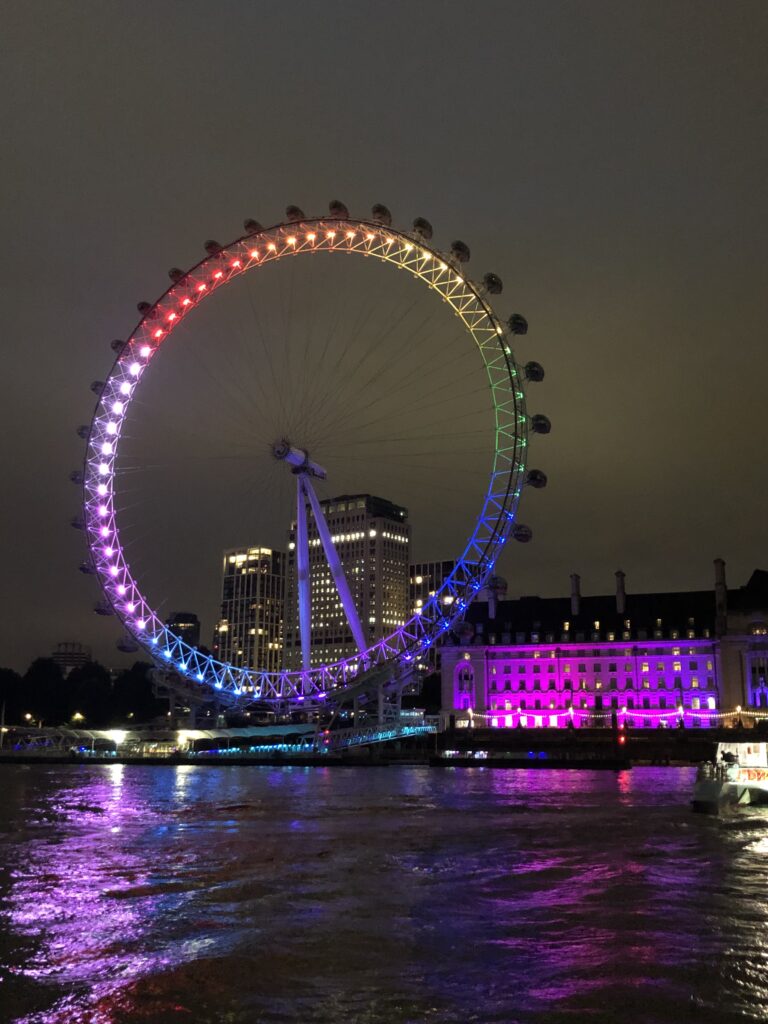