At the start of July, my husband, daughter and I spent three nights/ four days at Disneyland Paris. It was our first trip there in over 10 years. My husband and I have actually visited five times before. The first time was in 2002, with a 15-month-old toddler. In 2011, we visited with a 10-year-old, an 8-year-old and a 5-year-old. This time, it was just us and a 16-year-old.

We’d talked about going again many times over the years. But the boys were never keen and it seemed a massive waste of money to take people who didn’t want to go. So we needed to wait until they were old enough to be left at home. My daughter was supposed to go there in year 9 on a school trip, but Covid put an end to that, so it was a nice celebration for the end of her GCSEs.

We found that in the last 10 years a few things had changed and a lot had stayed the same.

Disneyland Paris is still magical and I still love it.

The downsides are that it’s very busy, very expensive and very hot! (Well, it was in July anyway. There is very little shade.)

We stayed at the Newport Bay Club hotel on site, which is a huge hotel with a nautical theme. It was certainly luxurious enough for us and our room had two double beds, which was very comfortable. Newport Bay Club is so big that it took us  four minutes and 450 steps just to get out of the hotel, according to my daughter’s Fitbit! 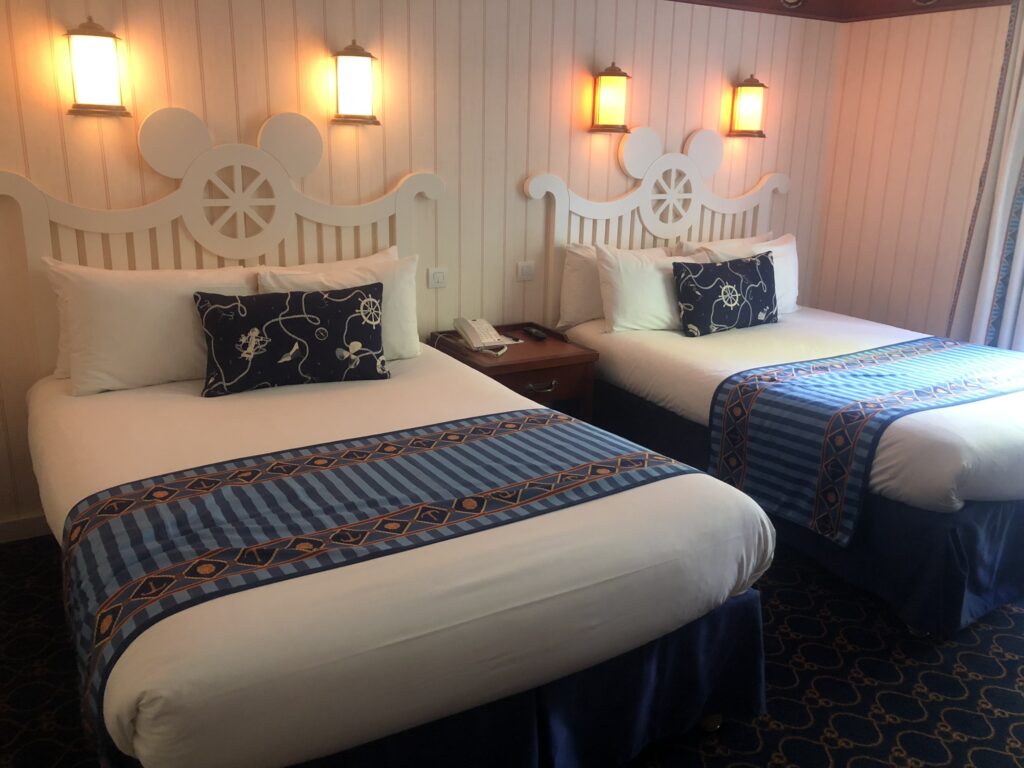 Our room at Newport Bay Club

My daughter loved the rides and that was her main motivation. I’m not a big fan of rides, but they are less scary than the ones at Alton Towers, so I went on most of them. We all loved Big Thunder Mountain, which is a runaway mine train ride. It is very fast, with lots of ups and downs and scary bits in the dark.

I went on the Indiana Jones ride, which went upside down. That was too scary for me and a definite ‘never again’. My husband and daughter enjoyed Hyperspace Mountain (an indoor rollercoaster in the dark), but there was a bit of a glitch and it got stuck briefly. That was enough to stop my daughter going on again.

I really wanted to go on It’s a Small World for old time’s sake. When the boys were little, we used to go on it again and again. Sadly it was closed for a year for refurbishment.

We went on Tower of Terror in the Walt Disney Studios Park, which truly is terrifying. I’d been on it before, but it was scarier than I remembered. It’s basically a broken lift with a spooky story behind it. You go up and down in the dark and you’ve no idea how far you’ve been or how long the ride will last. Scary characters keep appearing and then you do a massive drop. Never again! 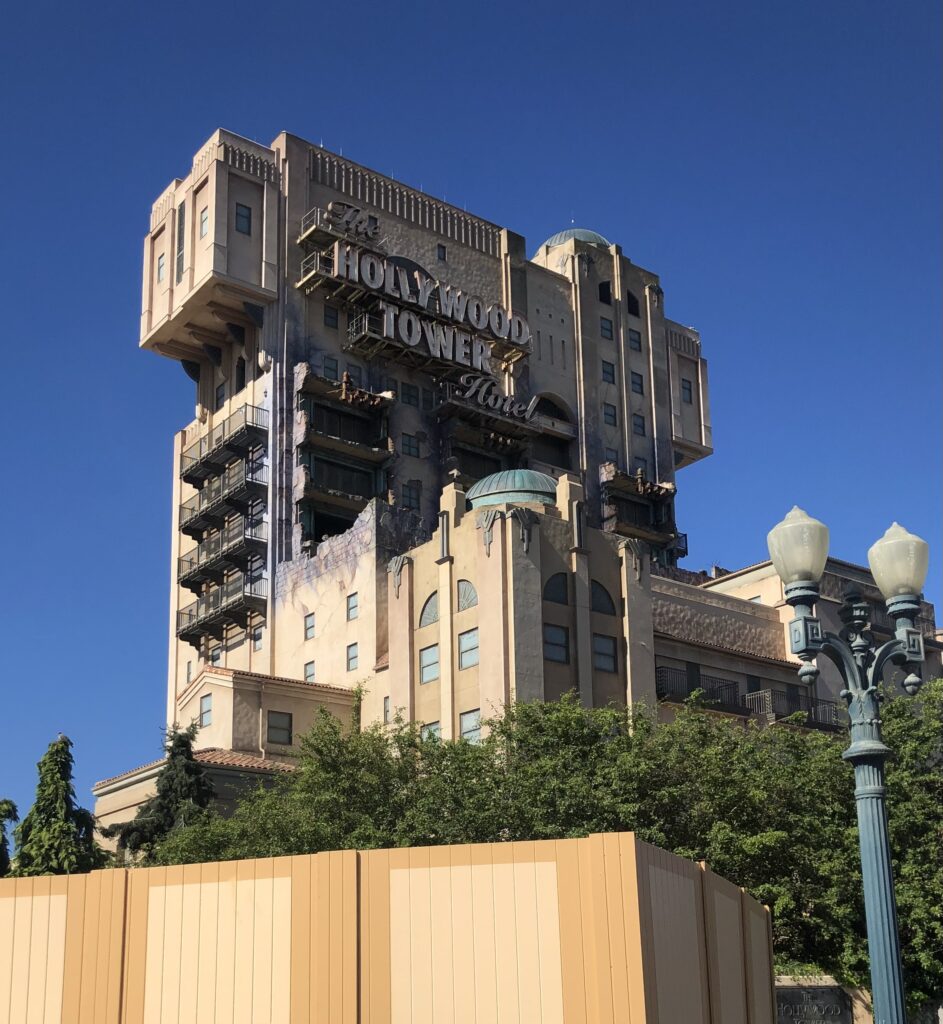 An unexpected delight was the Ratatouille ride. We did a single rider queue for that. If you’re willing to not sit with your family, you can get to the front of the queue faster, as you’re filling in the gaps where families have uneven numbers. You wear 3D glasses and you are basically Remy the rat on the floor of a restaurant, moving all over the place. I really have no idea how much I actually moved and how much was illusion, but it was great fun. 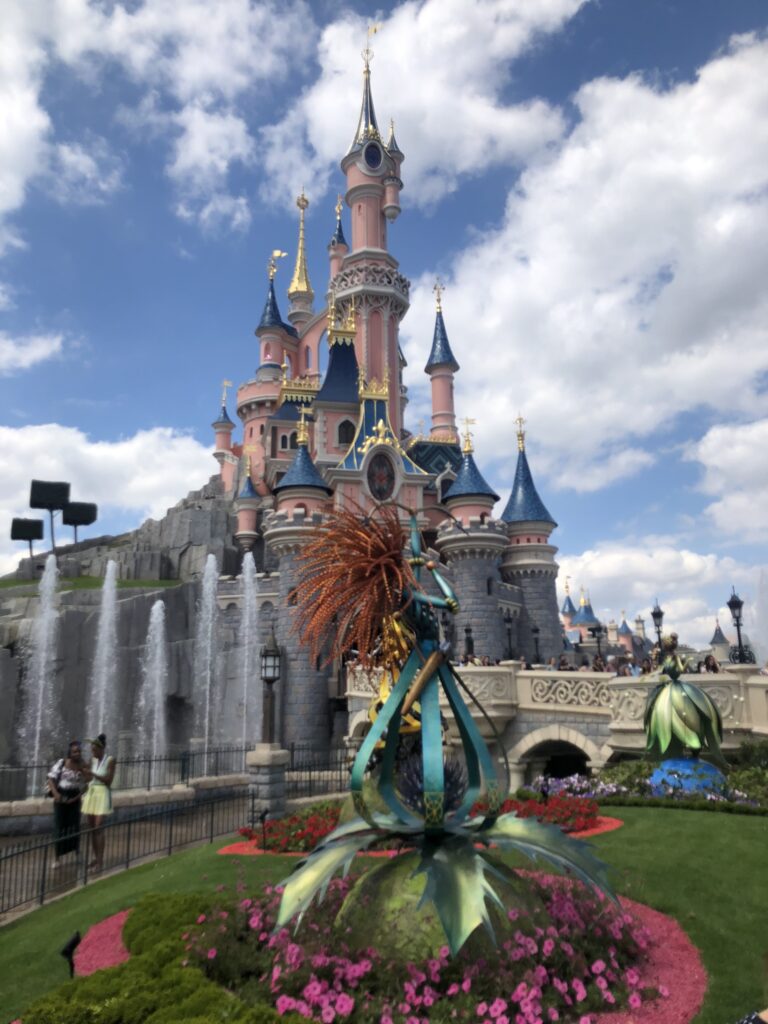 We’d seen massive queues for Crush’s Coaster in the Disneyland Studios park. We didn’t even know what it was, but on our last morning in the park we took advantage of the early opening (hotel guests can go in at 8.30 and everyone else at 9.30) and ran over there. We waited 20 minutes to get on. It was absolutely amazing. It started off as quite a cute, scenic ride through the sea (I like a cute, scenic ride, my husband and daughter don’t). Then suddenly it was a crazy rollercoaster, going in all directions. I had no idea even which way I was facing. By the time we came off, the queue was already 90 minutes!

One of the best bits for me about Disneyland Paris, actually the best bit, is meeting the characters. Sadly, things have changed a lot since back in the day. Back in the day, lots of characters wandered freely around the park and you/ your kids could go up to them, hug them and get a photograph. Kids liked to get a signature in a little autograph book too. Now you can only meet them in special meet and greet areas. There aren’t that many of them and the queues are LONG. My daughter and I joined a short queue to meet Jessie and waited at least half an hour. The characters are great and give lots of individual attention to everyone, but it’s not much fun queuing for hours. My daughter banned me from meeting any more characters after that! 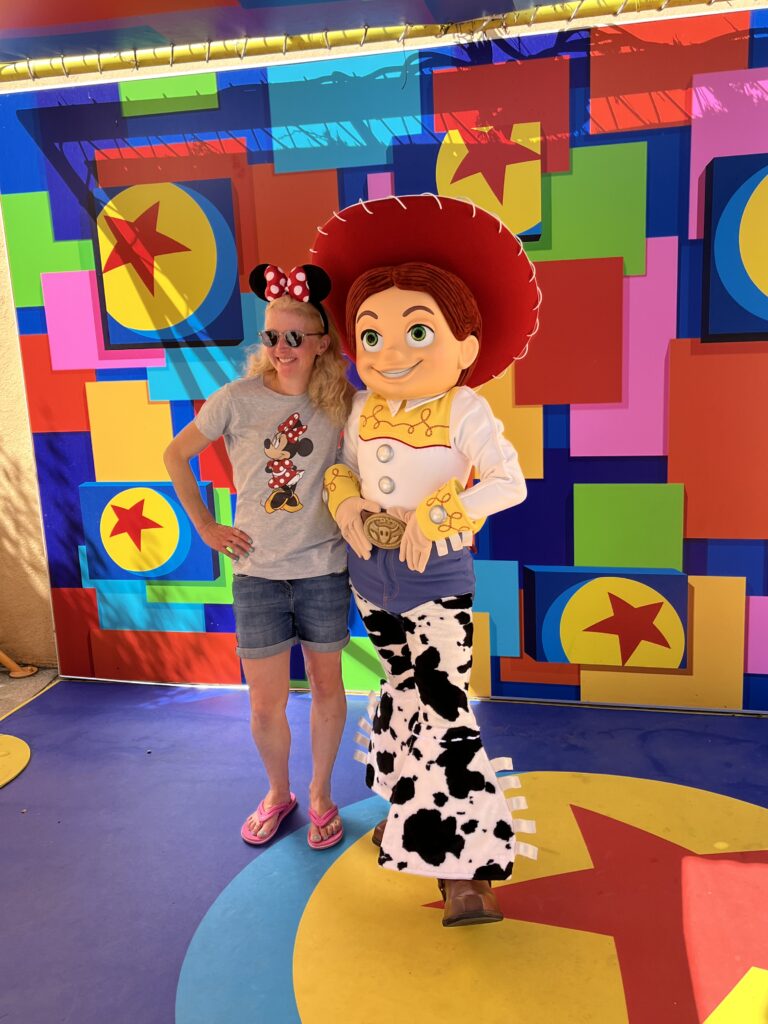