Last week, my son competed in his final English Schools national athletics championships. This is the biggest and most prestigious athletics competition available to young people. My son first qualified in year 10, but he wasn’t able to go because he fractured his hip. Of course it didn’t take place in year 11 (2020) and there was a slightly scaled down version in year 12.

This year, it would be the proper English Schools experience he’d missed out on in year 10. All athletes travel as a team and stay over in a hotel. Each county can enter 32 athletes. This is across three age groups – junior (year 8 and 9), intermediate (year 10 and 11) and senior (year 12 and 13). It is boys and girls and all athletics events – from 100 metres to 1500 metres steeplechase and hammer throwing.

I dropped my son off to catch his coach last Thursday afternoon and they travelled up to a hotel in Altrincham. Some of the athletes competed on the Friday and my son competed on the Saturday. He was in action at 10.15am in Manchester. At the last minute, my husband and I decided we needed to travel up and get a hotel on Friday night. Remarkably, it was my fourth hotel in a week. That’s about four years’ worth usually!

Last year, my son came 4th with a jump of 6.86. Of the boys in the top three last year, one was now too old and one wasn’t competing. They are all still ranked more highly than my son. There is one other boy of school age ranked more highly than my son, who didn’t take part last year and wasn’t there this year. Before we’d even known who was competing, I’d estimated that my son could be anywhere between second and sixth – most likely third or fourth.

When he saw who was actually there, my son realised he was ranked second on season’s best jumps. (Another boy had a better PB, but hadn’t done so well this season.) The boy ranked top had jumped significantly further than my son and had won English Schools last year.

On the first round, we heard the distances everyone was jumping as they read them out. The first boy jumped 6.01 and the second boy did a no jump. The distances were put on a board which was turned round for everyone to see – but not turned round quite enough for the parents to see! By the second round, the announcers talking about the track events totally drowned out the results of the long jump and we had no real idea how far anyone was jumping. This is annoying when you’re trying to keep track of everything.

My son’s first jump was perfectly on the board and it was long. A really good start. But then it was ruled a no jump!

At English Schools, it wasn’t made of plasticine. It was just a hard black plastic. A man was looking at the board and judging by eye whether or not the jumps were legal.

My son insists that we video every jump. We looked back on the video and it definitely wasn’t a no jump. As we’d thought, he’d hit the board perfectly.

I’ve never seen anyone query a decision in long jump and it isn’t actually possible. The second it is ruled a no jump, the sand is raked and there is no evidence of where an athlete landed.

The top ranked boy jumped just over 6.80, but he pulled something as he did it. He tried a couple more jumps, but he couldn’t jump further and he was in a lot of pain. It wasn’t going to be his day.

On my son’s second jump, he did 6.80. That’s a good start, but we knew he could and would jump further.

We heard someone go over 7 metres, but because of the difficulties with hearing, we didn’t know how far he’d actually jumped.

My son’s third jump was 6.77, but that was OK. We knew he always did his best jumps in the fourth or fifth round.

We heard another boy go over 7 metres, but again we didn’t know how far over 7 metres! My son still had it in him to come 3rd. A podium and a medal would have been very nice.

His fifth jump was another 6.77 and his final jump was a no jump. This one was actually a clear no jump.

In the end, my son came 5th. He was quite rightly very annoyed about the no jumps which weren’t no jumps. When the results were published, we realised there was just 4cm separating 3rd from 7th. If he’d jumped just 4cm further, he would have been 3rd. He definitely had jumped 4cm further in those no jumps.

But English Schools glory was not to be this time. Onwards and upwards for the last few competitions of the season… 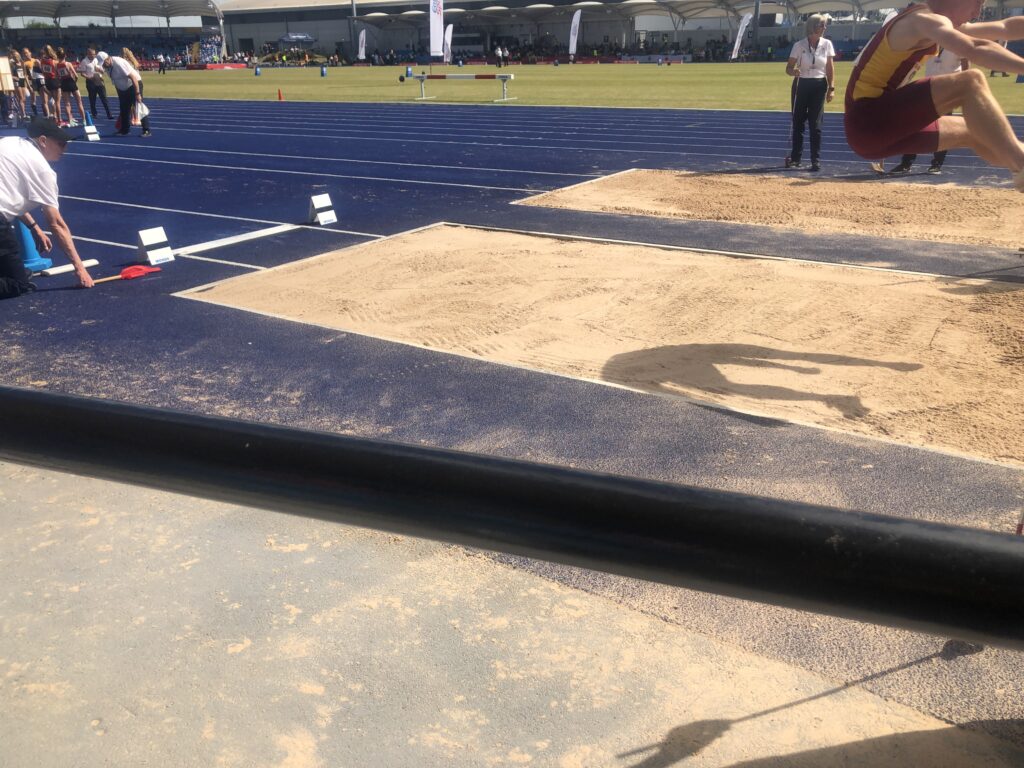