The FA Cup Final 2021 was an official government test event, to check the effects of running big events again as the Covid-19 pandemic eases. It was also a dream come true for my dad.

Leicester City have been in the FA Cup final four times over the years. The most recent was 1969.

And they lost every single one of them.

In 2021, they beat Man Utd 3-1 in the quarter finals, before beating Southamptom 1-0 in the semi finals. Leicester City were in the FA Cup final!

Two weeks ago, my husband called from work to say that he was guaranteed two tickets for the final, if he wanted them. He is a corporate member of Club Wembley through work. Club Wembley is basically a Wembley season ticket. In normal times, they are guaranteed a certain number of tickets a year, mainly for England games. They also get first refusal on other matches and events. We’ve been to see Ed Sheeran and Coldplay, thanks to Club Wembley. I have also been to two or three England games and Leicester City v Man Utd (who my family support) in the Community Shield in 2016.

I said I would ask my dad if he wanted the ticket. To be honest, I wasn’t sure. Not only has he had Covid, he has also had another health problem and a small operation in recent weeks.

My dad was literally speechless when I offered him the ticket. He was going to Wembley!

I had considered letting my brother have the other ticket, or even my eldest who is a bigger football fan than me. But when I heard my dad’s voice, I knew who was having that other ticket. Me! 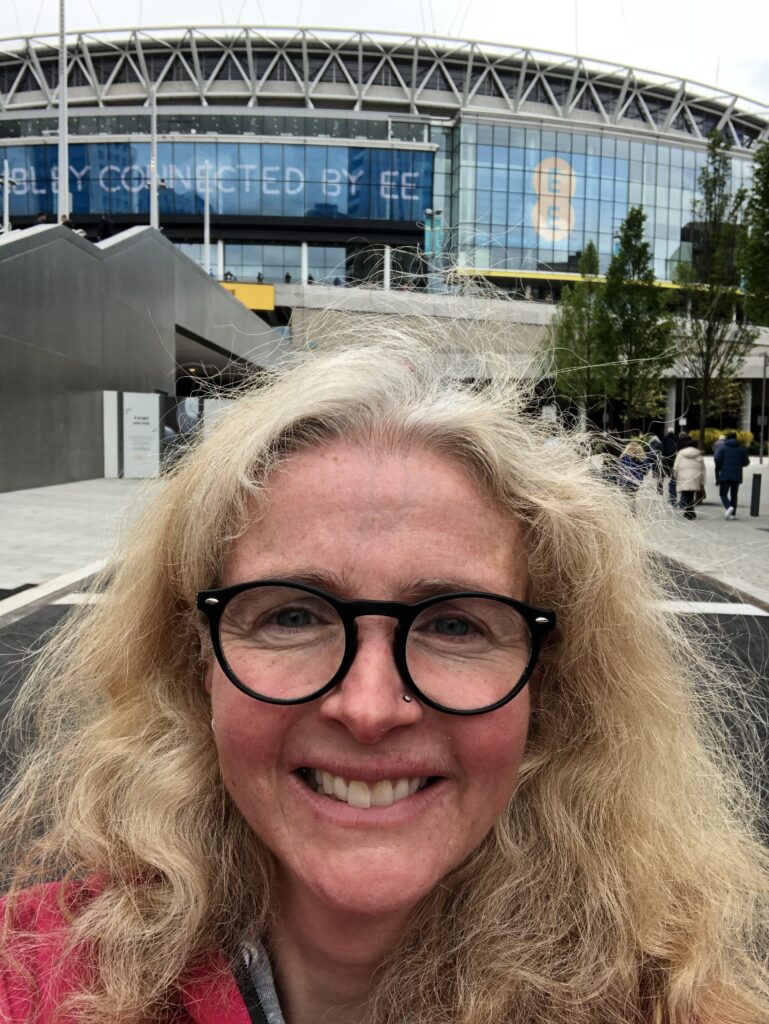 As a government test event, we had to get tested beforehand. Some people were required to go to test centres, but we just had to do lateral flow tests (the quick ones you do at home). I was really nervous about the test arriving on time. But I ordered it on Tuesday evening and it arrived on Wednesday morning. We had to test after 2.15pm on Thursday. Of course we were both negative. 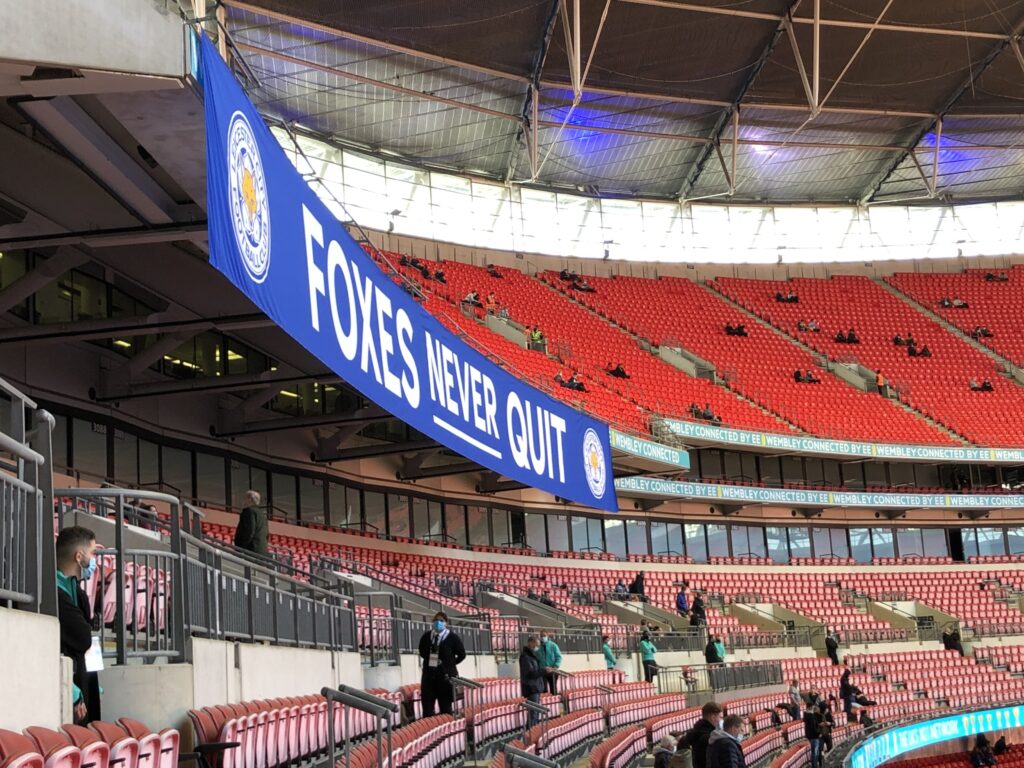 My husband (and two younger kids) drove us to Wembley. We got out of the car park to chanting Leicester fans in shirts and scarves. You don’t often see Leicester fans, especially not in Gloucestershire.

Sadly, Club Wembley is a ‘neutral area’ and colours weren’t allowed. I’d washed my scarf and my two retro shirts (one from the 90s and one from the noughties) in preparation too. But we were sat at the Leicester end and everyone around us was either a Leicester fan or a neutral who preferred Leicester. 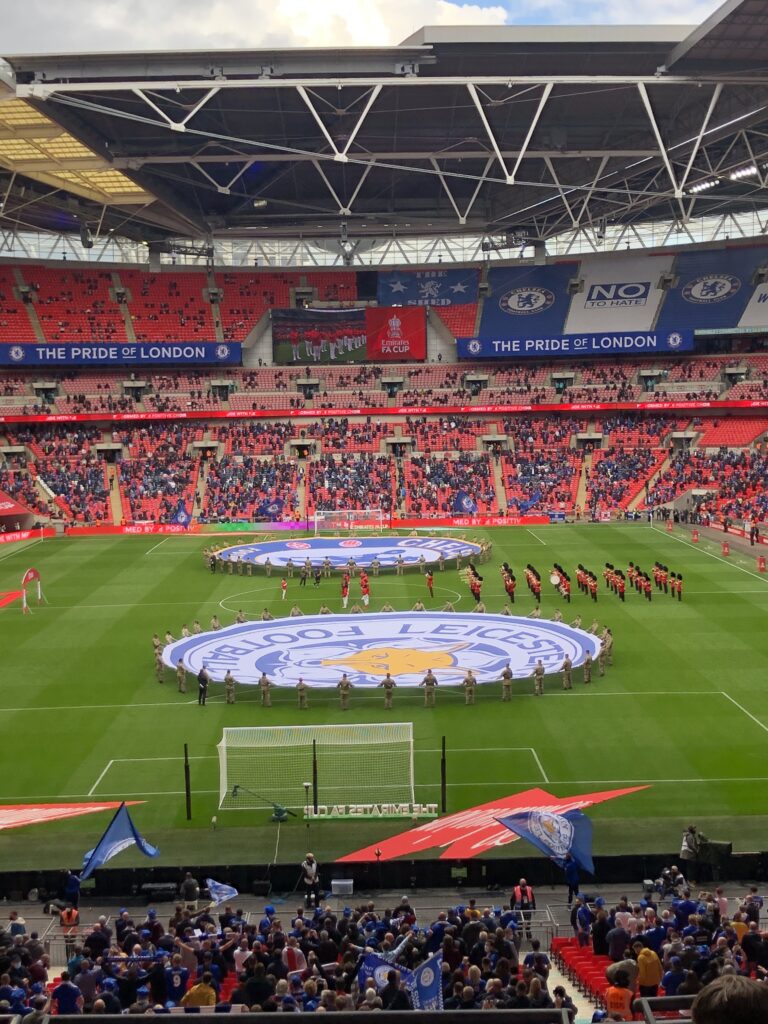 We had brilliant seats right behind the goal – Leicester’s end in the first half and Chelsea’s in the second half. We’d paid £72.5o for them. Apparently under normal circumstances those seats would be about £400 for an FA Cup final. The stadium was a quarter full. People were sat in alternate seats (even people from the same household) and some areas were completely shut off. There were a lot of stewards who told people off for moving seats or taking their masks off. As I was going to be wearing a mask for a long time, I’d opted for a loose one, plus a spare loose one. That was a bad idea as my glasses just constantly steamed up, so I was taking them on and off all through the game.

We were sat very close to Gary Lineker (lifelong Leicester fan), Alan Shearer and Ian Wright, who were presenting Match of the Day. 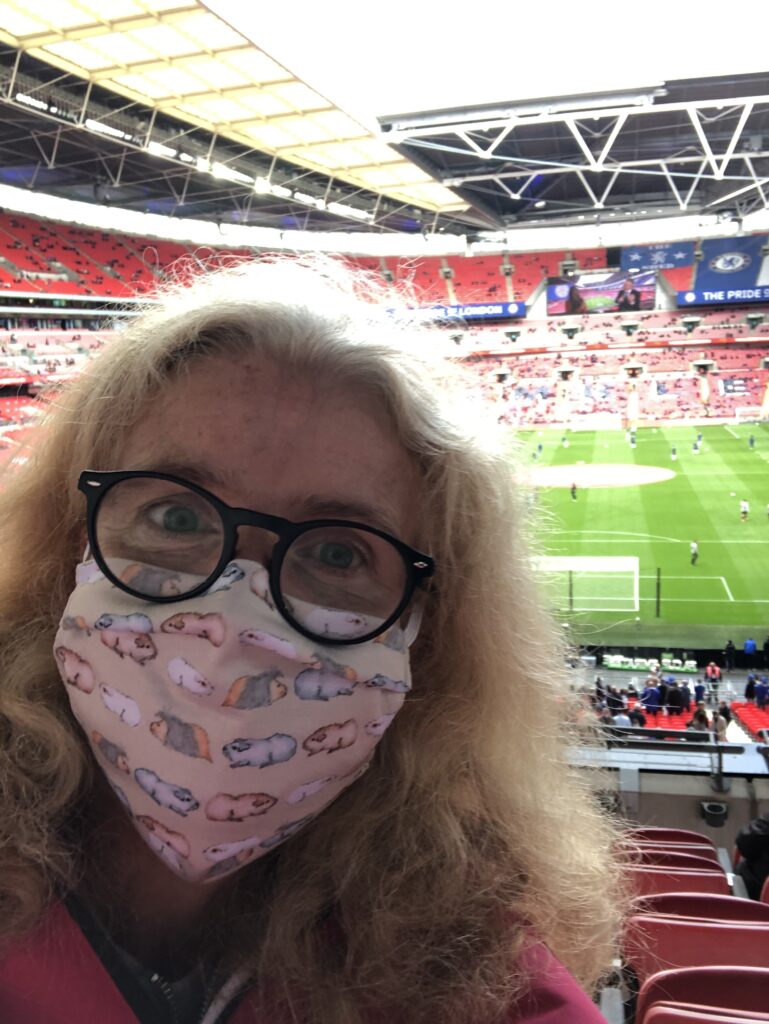 I must say, I never expected Leicester to win. Just to be there would be enough. But it wouldn’t really, would it?

Chelsea had a couple of half-hearted chances right from the start. But there were no real chances for either team during the first half. It was pretty equal, with Chelsea perhaps just having the edge. But Leicester’s fans were much more enthusiastic!

Leicester came out fighting in the second half. It felt like they were the stronger team and wanted the win more. But after 60 minutes, it was still 0-0. Was it going to go to extra time and penalties?

Then at 63 minutes, Youri Tielemans, surrounded by Chelsea players, saw a way through and fired the ball into the goal. It looked pretty spectacular from where we were sitting, but seeing it back on TV it looked even better. It is being talked about as one of the best ever FA Cup final goals. And me and my dad were among only 21,000 people to see it happen. 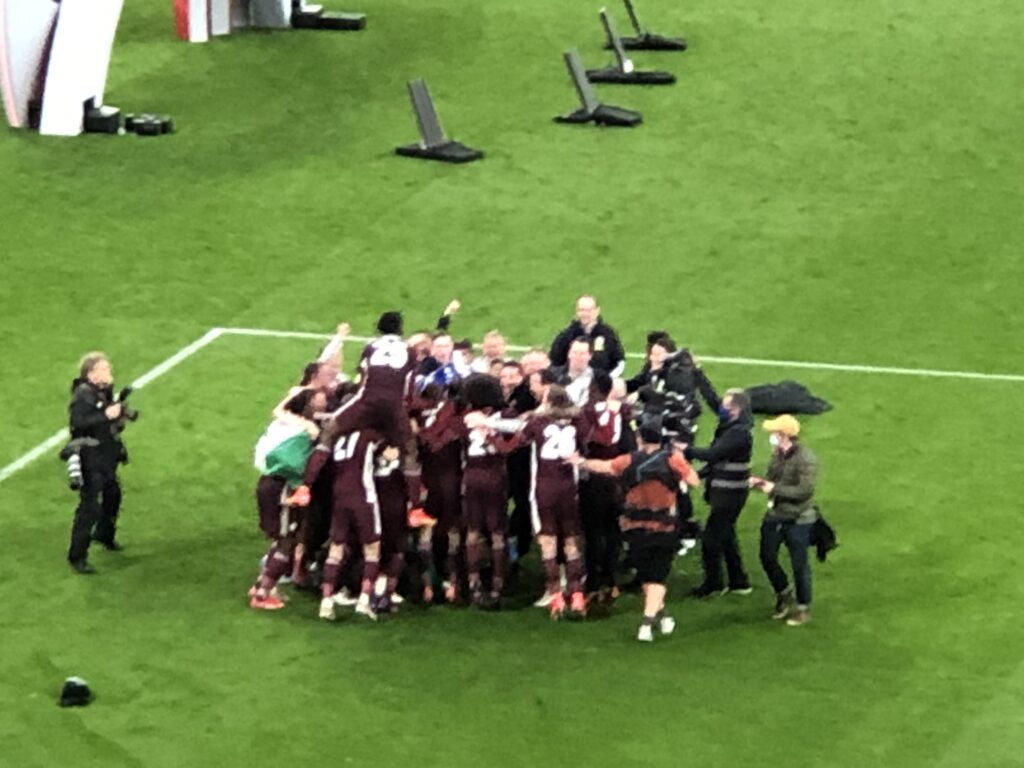 The whole stadium erupted in excitement. Leicester was going to win the FA Cup!

But there were still 27 tense minutes to go. Kasper Schmeichel pulled off a couple of amazing saves at the other end and Leicester stayed on top.

Then, at 88 minutes, heartbreak as Chelsea scored. The Leicester fans were in stunned silence. Then the ultimate insult – the goal was scored by Ben Chilwell, former Leicester player who moved to Chelsea this season.

I’d totally forgotten about VAR, it hadn’t been used at all during the game. But the goal went to VAR. A minute later there was confirmation that it wasn’t a goal. And the Leicester fans erupted all over again. Surely this time we’d really won it?

So Leicester City won the FA Cup 1-0 against the favourites Chelsea. And I got to watch it with my Dad, a lifelong Leicester fan and a Covid survivor, who had been on a ventilator five months previously.

It really was a dream come true. 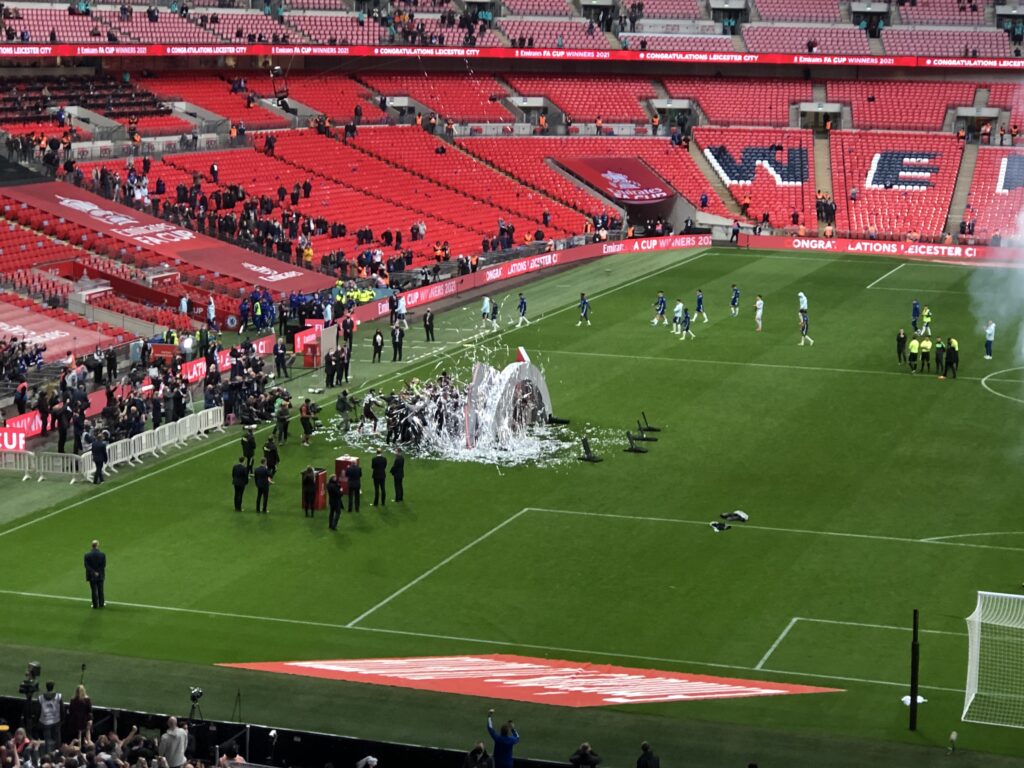