My younger son has recently done his D of E Bronze practice expedition. After much discussion with him, his friends, his friends’ parents, checking of the website etc etc, we worked out what he should take to eat.

The key things to remember are:

Here’s some of the things that are good to eat…

They’re higher in calories than normal bread, they don’t get as stale and they don’t crush as easily. What’s not to love? We spread the first couple with peanut butter for extra calories and protein and my son, who likes to eat dry bread at home anyway, was happy to eat the others dry the following day.

Dehydrated foods might be pretty devoid of nutritional benefit, but they’re easy to prepare, pretty high in calories and also hot. They fulfil the requirements of a cooked evening meal and they can help cold kids warm up.

Another food which doesn’t have a lot of nutritional benefit and you wouldn’t generally eat at home, but they’re tasty among all the bland carbs and don’t need to be refrigerated.

Good for protein and calories, but a definite no-no (along with the peanut butter bagels) if anyone in the group has a nut allergy. Also salty, which makes kids thirsty – not ideal when they’re trying not to drink too much as they have to carry it.

My son loves Nature Valley bars. They’re pretty high in sugar, as a lot of cereal bars are, but they’ve got a good calorie count and they’re tasty. Nature Valley also does a protein range, which I think we will try in future.

There isn’t time to cook breakfast on D of E. My son is happy to eat cereals without milk, so mini boxes of cereals were perfect for him. Again, they’re a bit high in sugar, but it’s only one weekend – and one where they’re burning lots of energy anyway.

My kids wouldn’t touch it with a bargepole, but dried fruit is lower in sugar than things like cereal bars and flapjacks and provides slow release energy. As well as being actual fruit, of course! 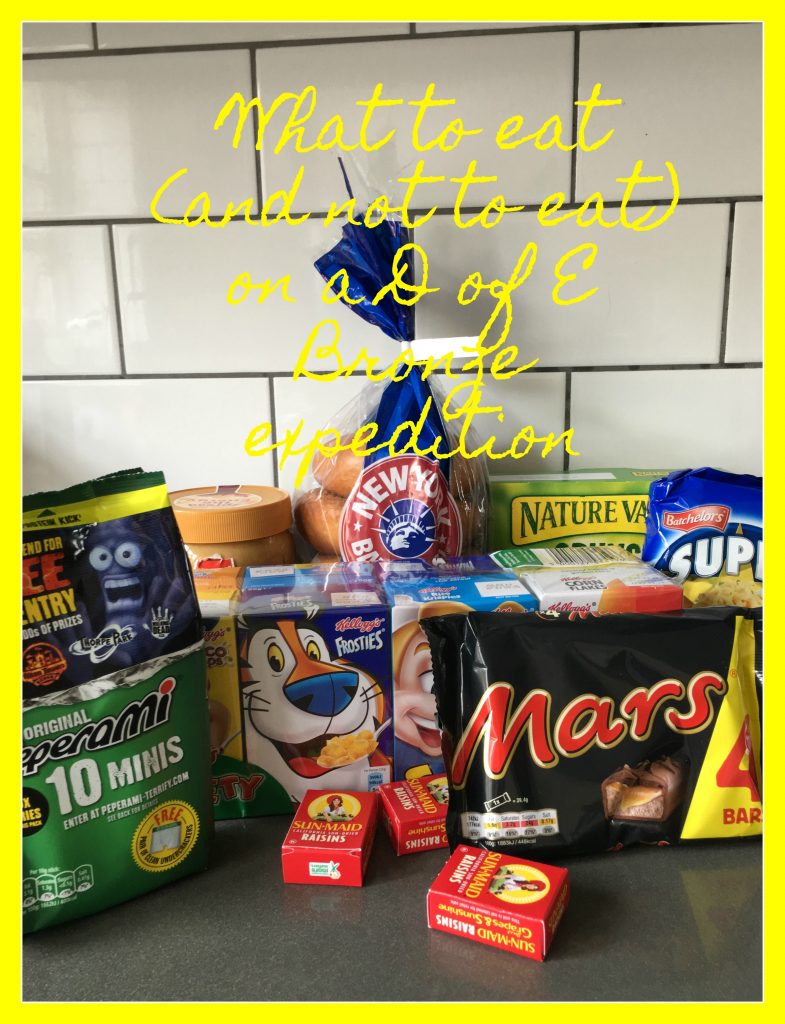 And here’s some which aren’t so good to eat…

It will get crushed and bruised, making it unpleasant to eat and potentially messing up the contents of your rucksack.

Nutritionally, they’re good, but they’re heavy and take up lots of space. They’re also pretty slow to cook on a trangia.

They’re too salty and just make kids thirsty when water is limited. Plus they get crushed easily.

They might be quick to prepare, stay fresh and not get damaged, but they’re very, very heavy.

A word about water… My son was advised to take two litres of water with him. There were refills at checkpoints and at the campsite. It was pretty hot and sunny when he went. At the campsite, the refill water provided by leaders was used for cooking and washing up and my son was unable to refill his drinking bottle. He spent an unpleasant evening without water and was unable to drink again until his first checkpoint the next morning. Despite the extra weight, he will probably take extra water with him next time.

Has your son or daughter done a D of E expedition? What foods worked well for them?