After being cancelled last year, Cheltenham Challenge half marathon went ahead this year – albeit in virtual form. I didn’t do a single virtual race last year and it wasn’t something I was particularly keen to do this year. But Cheltenham Challenge is a charity race, raising money for Caring Communities and People (CCP) in Gloucestershire.

The real Cheltenham Challenge half marathon is a very tough run. It’s not a half marathon you do in under two hours. Participants in the virtual event of course had the choice of exactly where and when they did it. But I wanted my challenge to be a challenge, so was keen to stick with the proper course. 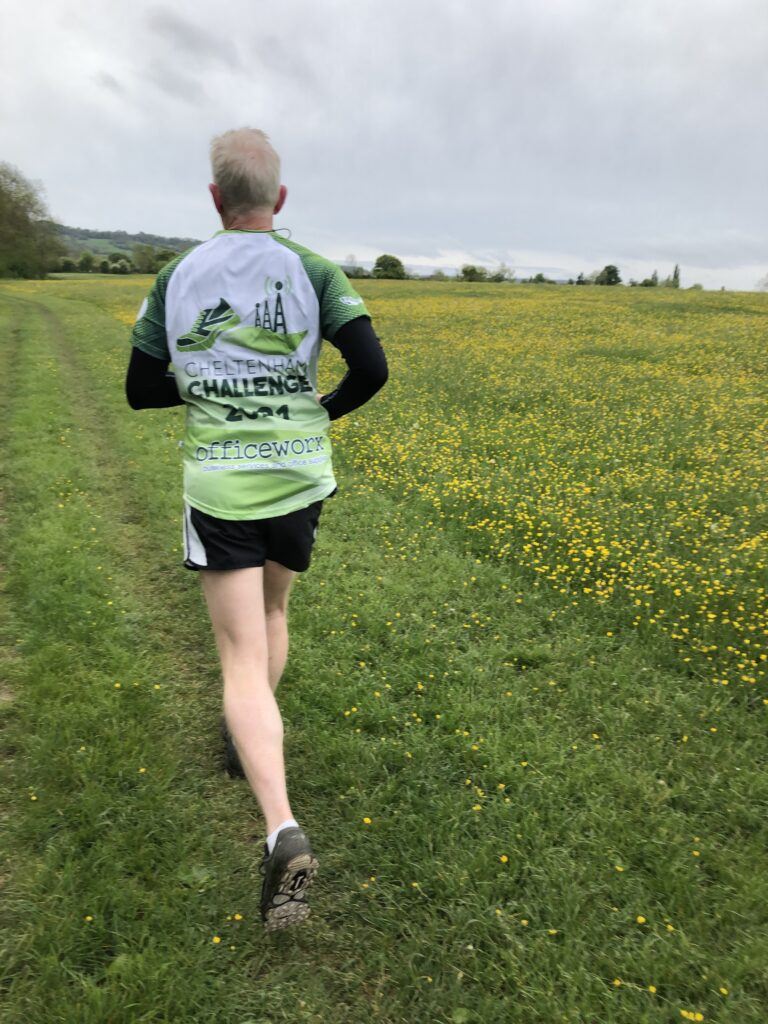 I ran with my husband, as I often do these days. The organisers had shared a map of the route on Facebook, which we did our best to remember. (Luckily, my husband is very good with maps and routes.) There were also a couple of videos of some of the more confusing parts of the route, which I watched and tried to remember.

The course starts at Cheltenham Racecourse and loops around some nearby fields, which were very wet and muddy. We were wearing our Cheltenham Challenge 2021 T-shirts and everyone we saw said ‘Good morning’ to us, far more than on a usual run.

At about three miles we found ourselves in the village of Prestbury, where we saw another group of people in their special T-shirts. They followed us briefly and then disappeared. Who knows if they were doing a different route, doing the 10k race or just a lot slower than us? They were the only other Cheltenham Challenge runners we saw all day. 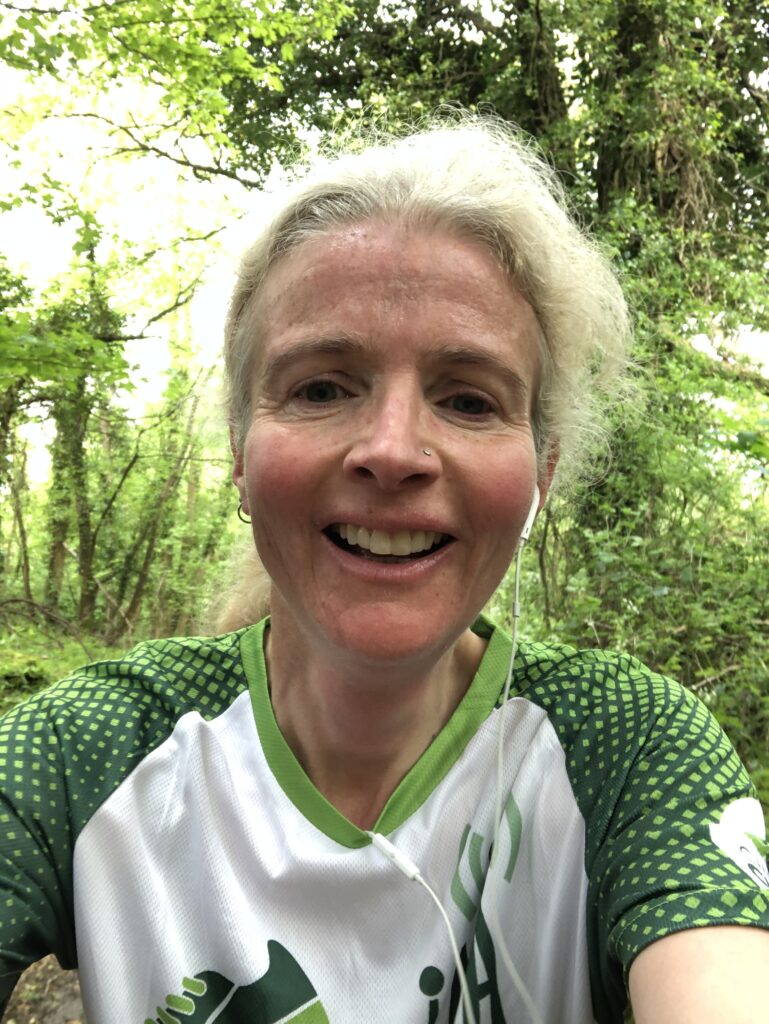 We then ran along the side of the local primary school on a small footpath, which eventually came out at the bottom of a long and very steep hill – Noverton Hill. I remembered this very well from last time! It is basically a mile upwards, it is narrow, covered in uneven rocks and has a stream pouring down it. Between the gradient and the uneven surface, running is pretty much impossible. 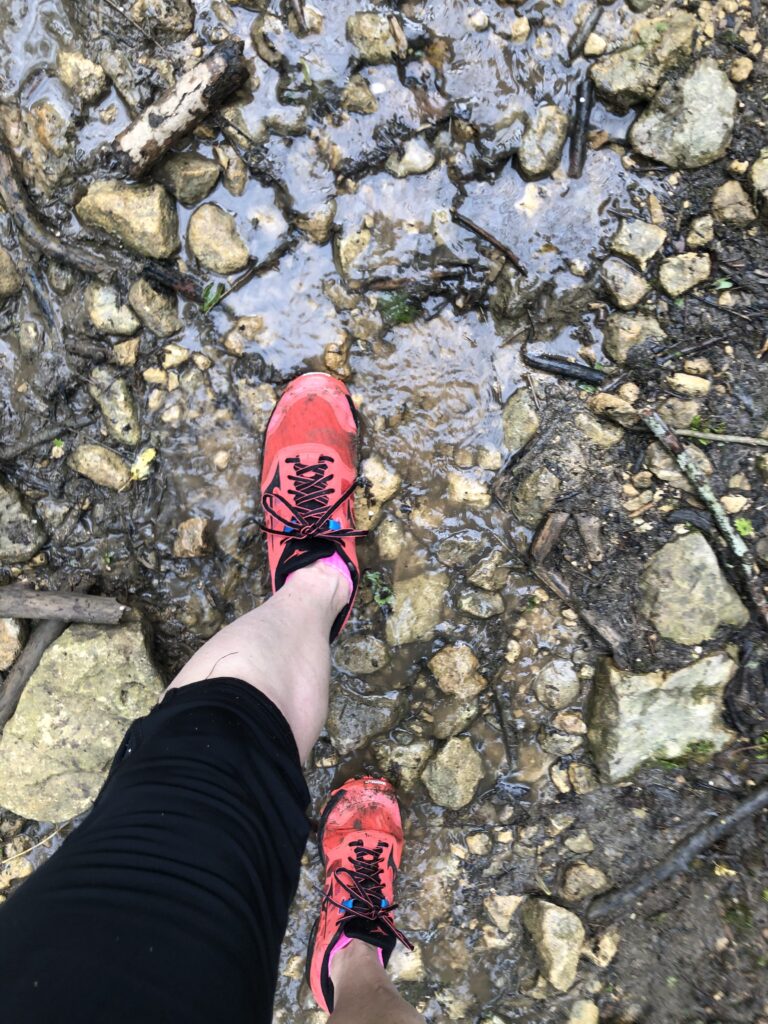 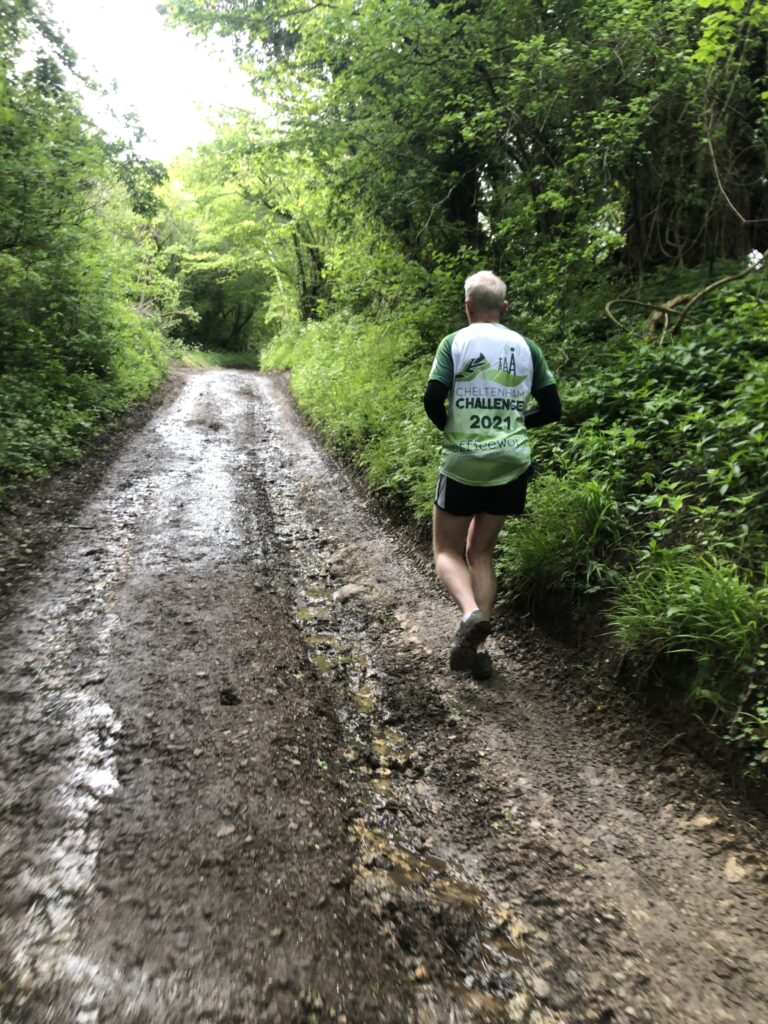 At the top, we came out onto Cleeve Hill and spectacular views across Cheltenham. We were still running uphill, but it wasn’t as steep as before. At exactly 6.5 miles we arrived at a famous Gloucestershire landmark – the pylons or the ‘Three Sisters’, which you can see for miles around. We were very pleased to have got the route right up to that point!

We then ran across the top of the hill, down a bit and up a bit and headed towards the golf course club house. Before getting to the club house, we knew we had to take a sharp turn back on ourselves, taking the lower route across the hill. As soon as we turned round, we got hit by the wind and it felt like the temperature had dropped by about 10 degrees. 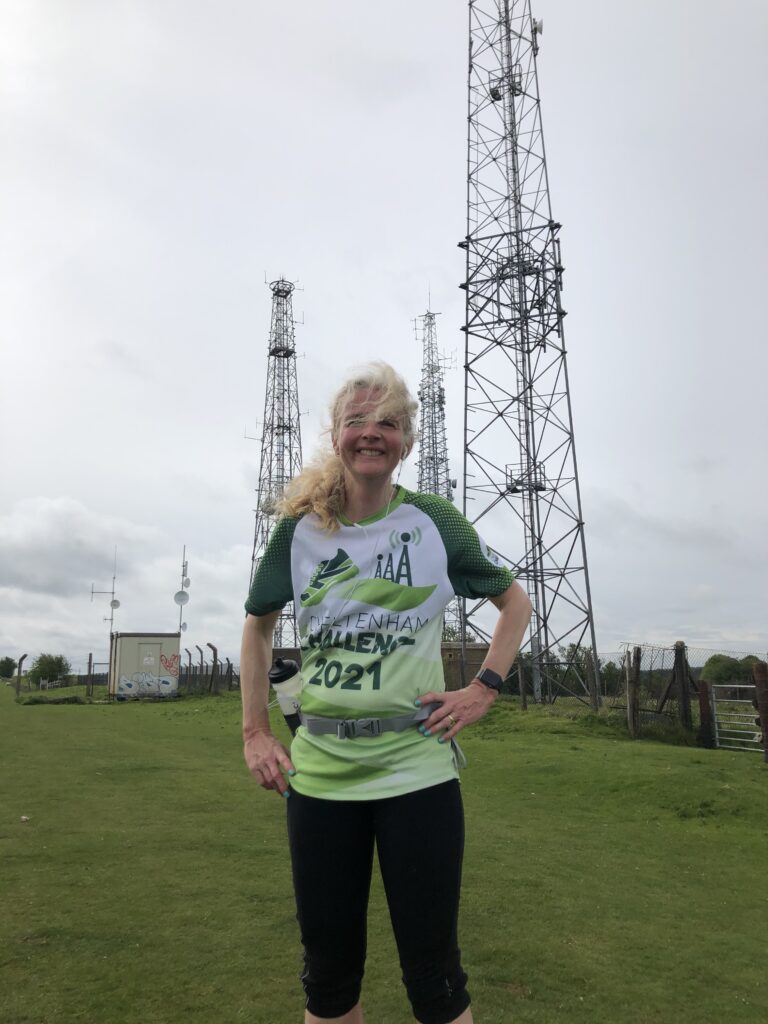 We ran along this slightly lower level for longer than I expected to. The path was very narrow, so it was slightly scary. I knew from the map that we were supposed to turn downwards into Nutters Wood level with a well known tree – the Memorial Tree or ‘Lonely Tree’. (Yes, in Gloucestershire we have a well known tree). The problem is that the Lonely Tree is on the top of the hill and we couldn’t see it from where we were. We could see the wood behind a wall, but there was no way in. We didn’t know if we’d gone too far or not far enough. This was the only point we paused our watches. I hadn’t wanted to pause our watches, because we wouldn’t on the real thing, but on the real thing there would be marshals and other runners, so we wouldn’t get lost.

We hadn’t gone quite far enough and we soon found our way into the wood. Now I’m sure Nutters Wood is named after something to do with actual nuts, but it seems a very appropriate name as only nutters would throw themselves down the very steep hill of slippy mud surrounded by trees. It’s almost impossible to go slowly and carefully and I found the only way to stay upright was to steady myself on trees as I went down. I was already muddy, but in Nutters Wood the mud made it all the way up to my bum.

I’m not sure if we took a bit of a wrong turn because it seemed shorter than I’d remembered it, but we came out onto the main road in more or less the right place. Then we remembered which footpath to take once we got into the village of Southam. At this point, we’d only done 10 miles and we were already very close to the racecourse. I’d seen a video online which showed the route going back into Prestbury before looping back round to the racecourse. I’d even seen the path we would take on our outward run. My husband was adamant the route didn’t go back into Prestbury.

All along we’d said it didn’t matter if we got the route slightly wrong, as we could always add a bit or finish before the end to get the distance right. The key parts for us were Noverton Hill, the Three Sisters and Nutters Wood and we’d run all of those. But we had also said we didn’t want to spend too long running round the racecourse. We were back in the racecourse car park at 11.7 miles, so we had to run round the car park for nearly a mile and a half! Luckily it is a very big car park.

On the whole, we’d done a pretty good job of sticking to the route and we’d completed the Cheltenham Challenge half marathon, with an elevation gain of 1,475 foot, all by ourselves! We even got a six minute PB – finishing in 2:11:47. 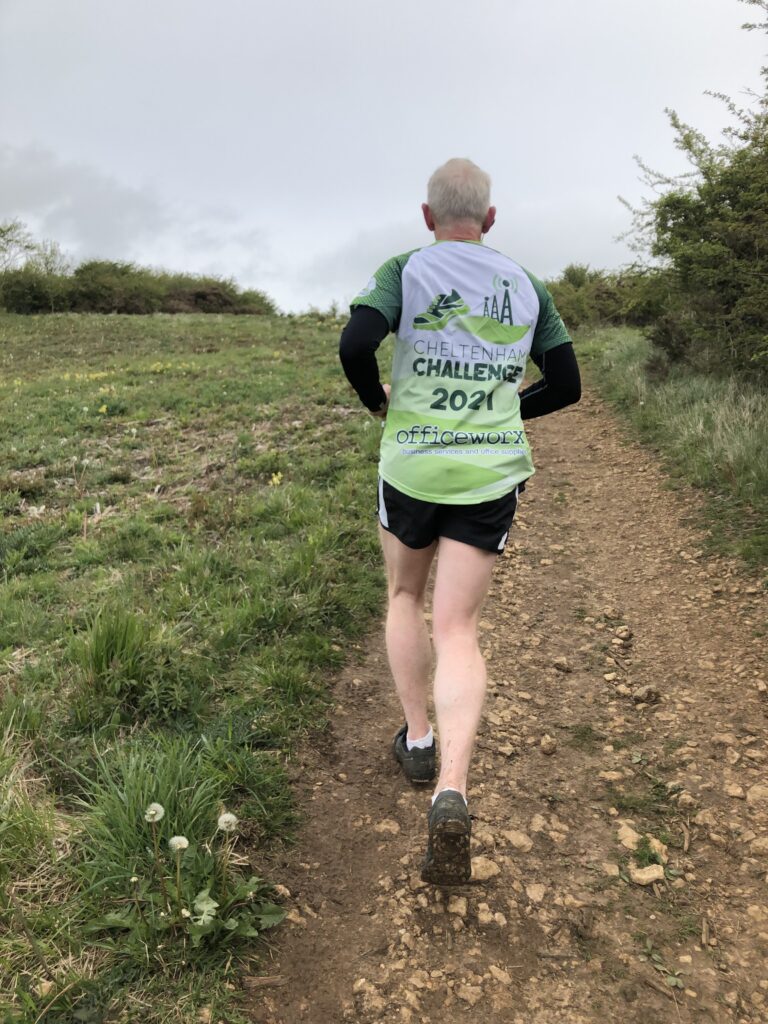