For as long as I can remember, I’ve struggled with teatime on weekdays – what to eat and when to eat it. We have a number of issues – two of us are vegetarian, three of us aren’t; one of us is very fussy; and two of us have a wheat intolerance. And we have ballet classes exactly when we should be eating.

When my daughter was younger, her classes were at 4.30 or 5pm. So I would take her to ballet, then go home and cook. But as she’s got older, the classes have got later. So she’s starting any time between 5.30 and 6.30, depending on the day of the week. I tried cooking after her classes. But we were all so hungry it was making us hangry. And we often had later activities too – like Scouts, Explorers or athletics club.

So I started cooking earlier – as soon as my son and I got in from the school run. And by ‘cooking’, I mean getting food out of the freezer and putting it in the oven.

My younger son eats early at school and always eats a pretty small breakfast and lunch. Every day, he got in the car and said ‘What’s for tea?’. He got home, ate a packed of crisps and said ‘When’s tea?’. I gave him an estimate of teatime – usually around 4.45 – and at 4.43 he would appear and say ‘Is tea nearly ready?’. Every. Single. Day.

Because of our various food issues and the shortness of time, we were eating crap. I was aware of this and I felt bad about it, but I didn’t know how to change it. We didn’t have a meal plan as such, but we had a few regular days for things.

Monday was fish finger sandwiches (or veggie sausage sandwiches), which my husband introduced to the family, as he usually plays football on a Monday evening and needs something quick and light. Tuesday was pizza, not to mention potato waffles and baked beans. Wednesday was a grey area, because we usually had no food in the house, as it was Tesco day. (This was the good old days before I sacrificed my Tesco deliveries so that vulnerable people could have them. I really miss them and I hope I can get them back one day.) Thursday was often spaghetti bolognese, which was definitely the best weekday meal. I had to do a veggie version and a meat version, plus normal pasta and wheat free pasta. 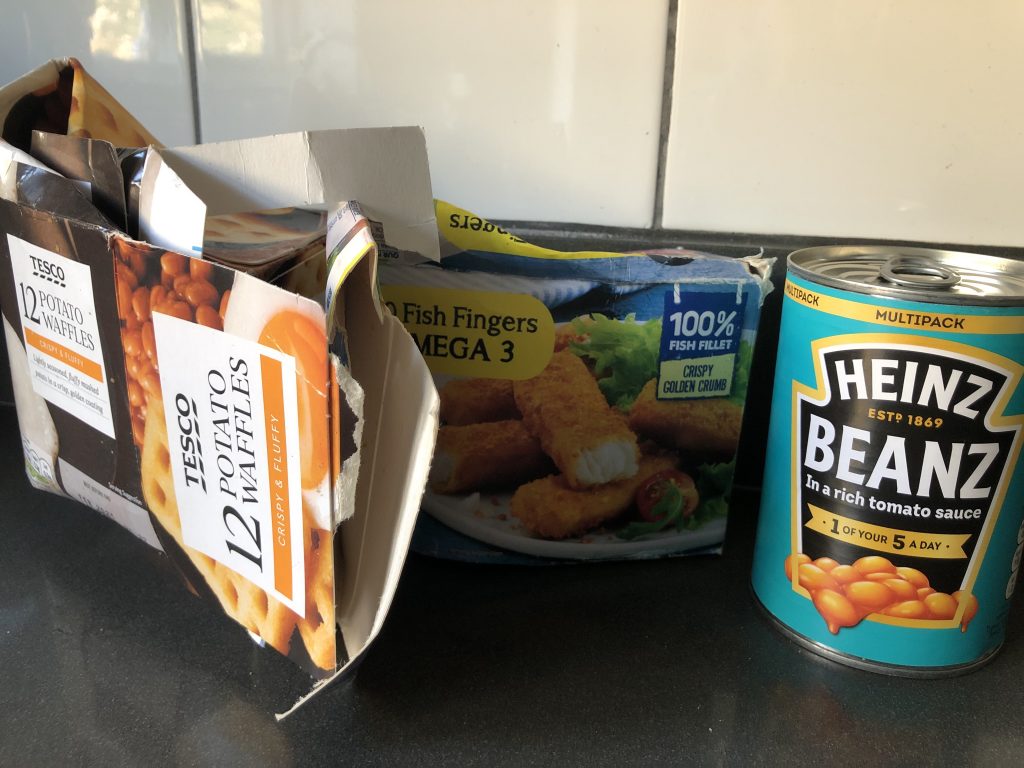 Friday was the start of the weekend, which meant we either ate something more proper, or we had fish and chips from the chip shop.

I’m pleased to say that we did always eat better at weekend and actually made proper food. Weekend meals include curry, roast dinner, lasagne and enchiladas (always with a meat version and a veggie version for everything).

But I hated the food we were eating at teatime on weekdays. It wasn’t healthy or balanced. It wasn’t good enough for growing, active teenagers. I really wanted my kids to eat better, but with the time pressures I was under most days of the week, I couldn’t see an alternative.

And then lockdown happened, and everything changed…

(Just for clarification, by ‘teatime’ I mean what some of you might call ‘dinner time’ or even ‘supper time’, although I very much doubt ‘supper’ is ever eaten at 4.45pm. My husband is northern and my parents are from the Midlands. We have always called the last meal of the day ‘tea’ rather than ‘dinner’. My kids have inherited this trait, despite living in an area that eats ‘dinner’ and mixing with some kids who eat ‘supper’.)