The A Level results

Home » Family » The A Level results

So my 18 year old son has only gone and smashed it with his A Levels. Lots of kids will have done. But for my son, these results really were against all odds.

But he has never been good at schoolwork.

Not only has he struggled to get stuff down on paper, he has never had the motivation either. He is one of these kids who has sailed through school doing the bare minimum. He’s skipped homework or done it badly. He’s handed stuff in late. For 13 and a half years, he has had teachers tearing their hair out. Because they knew he could do more. We knew he could do more too, but we’d kind of accepted that this was just the way he was.

His GCSEs didn’t set the world alight. To be honest, they were fairly underwhelming. He achieved what he’d set out to achieve – a place at grammar school. But only just. He didn’t get a single A at GCSE and I think he was slightly disappointed about that. But in a strange way, he was quite proud to have the ‘second worst’ GCSE results in the year at his new school.

Year 12 started off well with the novelty of a new school and being around bright kids who were motivated to work. But he fell into the role of being the rebel and the class clown, something he had never done at his comprehensive, where there are many more badly behaved rivals ready to take that particular crown. He drifted through the end of year 12 and the start of year 13.

His target grades, based on his GCSEs and his performance in year 12 were CDD.

Only a few months ago we were giving a stark warning. He was on course to fail his geography. Not get a D or an E. To FAIL.

If there’s one thing my son likes to do, it’s to prove people wrong.

We were in awe at his mock results – an A in his best subject and Cs in his other subjects. He’d revised for them, but not VERY hard. Could he really get good A Levels?

But between the mock results, the hard work and the confidence, we started to believe he could do well.

Absolute best case scenario would be A*BB, but a realistic good scenario was ABC. I felt we were looking at ABC or ACC. But we could just as easily have been looking at BCD.

His personal study in geography had come out at C/D. I think this is worth 20% of his final mark, so it was going to drag down his result a bit. If he got a C on his paper, it could still come down to a D. The chances of getting a B in geography were very low indeed. He would need to get an A in his paper.

In many ways, the results didn’t ‘matter’. He’d got his apprenticeship, which is unconditional. But he wanted good results for his own sense of achievement.

We were all feeling the nerves the night before and on the morning of results. Could he really get that ABC?

He went into school on his own and strolled out soon afterwards with his envelope. When he muttered the words, I couldn’t believe it. Yes, there were tears. Not many. He doesn’t like me to cry, it’s embarrassing. But I could have cried A LOT of tears.

He got the same as me. I was a ‘clever kid’. One of the cleverest in my year. Plus I always worked really hard.

Nobody would have ever said my son was one of the cleverest. And he certainly didn’t work hard.

My son got ABB in his A Levels.

I will be proud of that for the rest of my life. 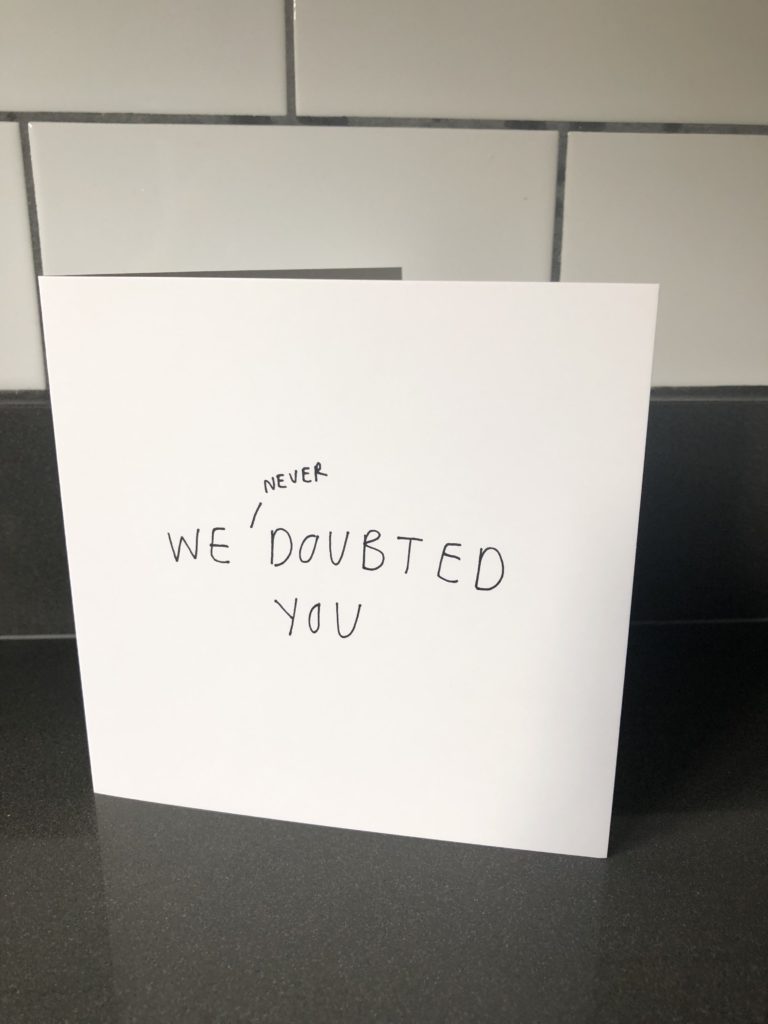