On our recent short break to Padstow, my husband, son, daughter and I ran Eden Project parkrun.

I know it’s hard to believe, but in 2015, 2016 and 2017, we just skipped parkrun when we were on holiday. We would have done a Padstow parkrun, but there isn’t one. Last year, we started to run parkrun on holiday. This year, we’d planned to do Lanhydrock parkrun, near Bodmin (there aren’t many parkruns in Cornwall).

Eden Project parkrun starts at the visitor centre close to the banana car park. As the majority of runners are tourists, there is a volunteer helping people with parking. We got there pretty early (it was about a 35 minute drive from Padstow), but the volunteer was already there. There are plenty of toilets at the visitor centre – always much-needed when people have a bit of a drive to get to parkrun. 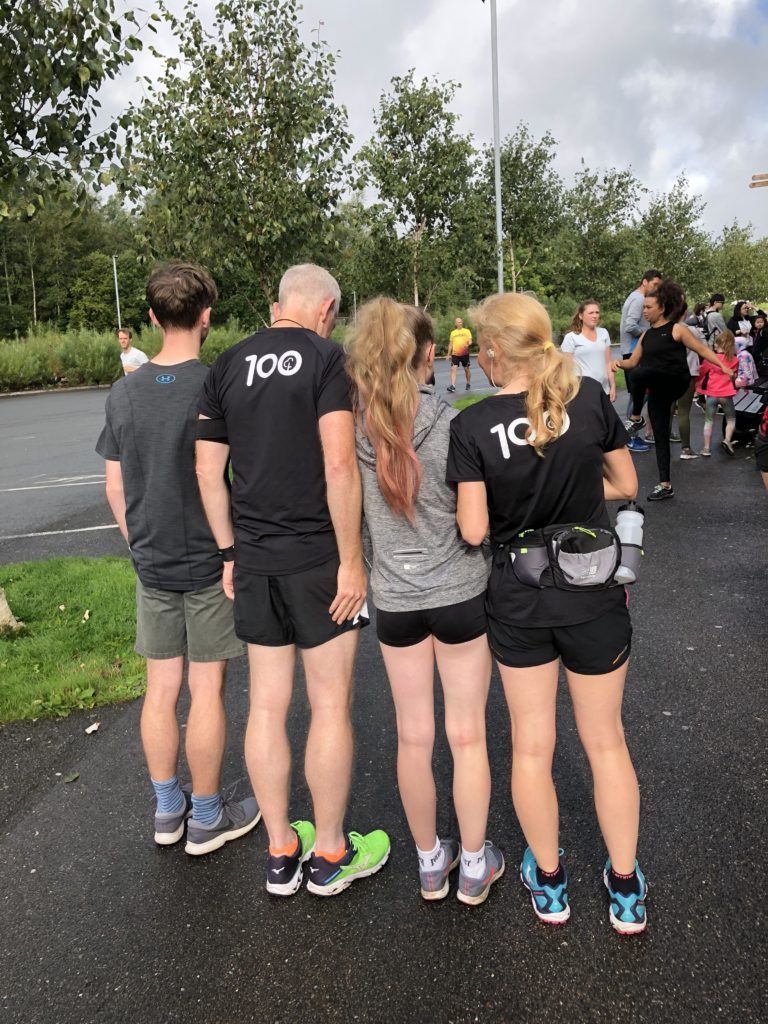 There were over 500 runners there when we ran Eden Project parkrun.

The run director described it as a ‘fast course’ and you can certainly take advantage of the downhills.

The course starts with a long downhill to the main Eden Project area. Once you’ve done the big downhill, you don’t go back up to the car park again. You then run two and three quarter laps right by the biomes. The biomes look stunning and the garden looks stunning. After a very rainy day, the sun was shining and the sky was blue. It really is a beautiful place to run.

But it’s not flat and it’s not easy.

You don’t do the big downhill again, but there is still quite a bit more downhilll on the laps. And what goes down, must go up. The steep bit is short, but it’s tough and you have to do it three times.

The finish line isn’t that clearly marked – and my husband missed it! The only reason I knew where it was, was because the winner lapped me just as I was about to start my third lap and I saw him finish.

I crossed the line just two places behind my brother-in-law, in a respectable 23:41, which is only a few seconds slower than I usually run at home. I was 11th female, 2nd in my age category and less than a minute behind my husband. I’ll take that for a new parkrun. My son, who is supposed to be running slowly as he is still recovering from a fractured pelvis, finished a minute after me. My daughter finished in just over 32 minutes, which she was happy with for a strange parkrun. She found it particularly hard.

Everyone was finishing the run gasping for breath and drenched in sweat. You don’t see that anywhere near as much at our home parkrun. The course was obviously very tough. 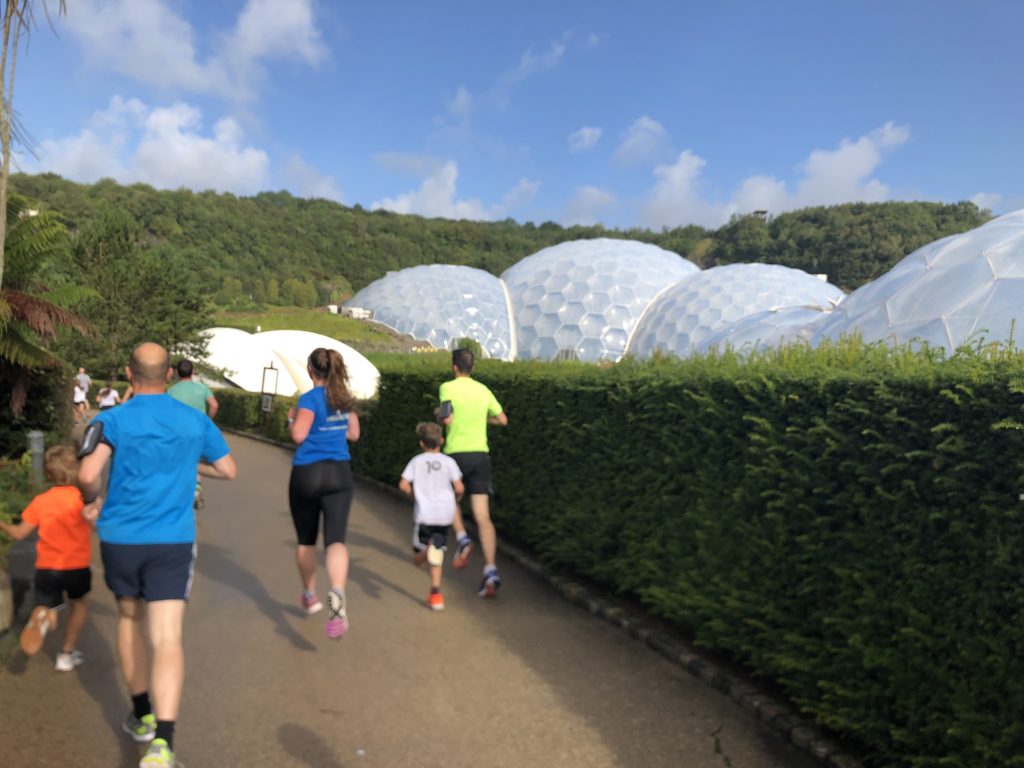 Eden Project does a special parkrun breakfast in their cafe and it is VERY popular. I think practically everyone who ran stopped for breakfast afterwards.

My brother-in-law went back to look for my sister, niece and nephew, who had no doubt dropped out somewhere along the course. My niece is 6 and completed her first parkrun a couple of weeks earlier, when my dad ran his 100th. My nephew is 4 and has never completed a parkrun.

They arrived in the cafe, drenched in sweat HAVING COMPLETED THE PARKRUN. I was so proud of them! They’d had a lot of fun and managed to complete the course in just over 43 minutes. That is an incredible time for their little legs.

And here’s an amazing thing worth bearing in mind for the future… We didn’t do it ourselves, but if you run Eden Project parkrun, or you’re there supporting friends and family who run, you can stay and look round Eden Project for the morning for free!

You may recall that my son fractured his pelvis in a long jump competition a few weeks ago. Since then, he has been gradually building his strength and fitness back up. Two weeks before Eden Project parkrun, the physio cleared him to start ‘gentle jogging’ again. After four weeks of walking parkrun increasingly quickly (he walked the fourth one in under 35 minutes!), he ran our home parkrun in just over 28 minutes the previous week. He was supposed to do Eden Project in about 27, but couldn’t resist going faster. Luckily he seems to have suffered no ill effects. 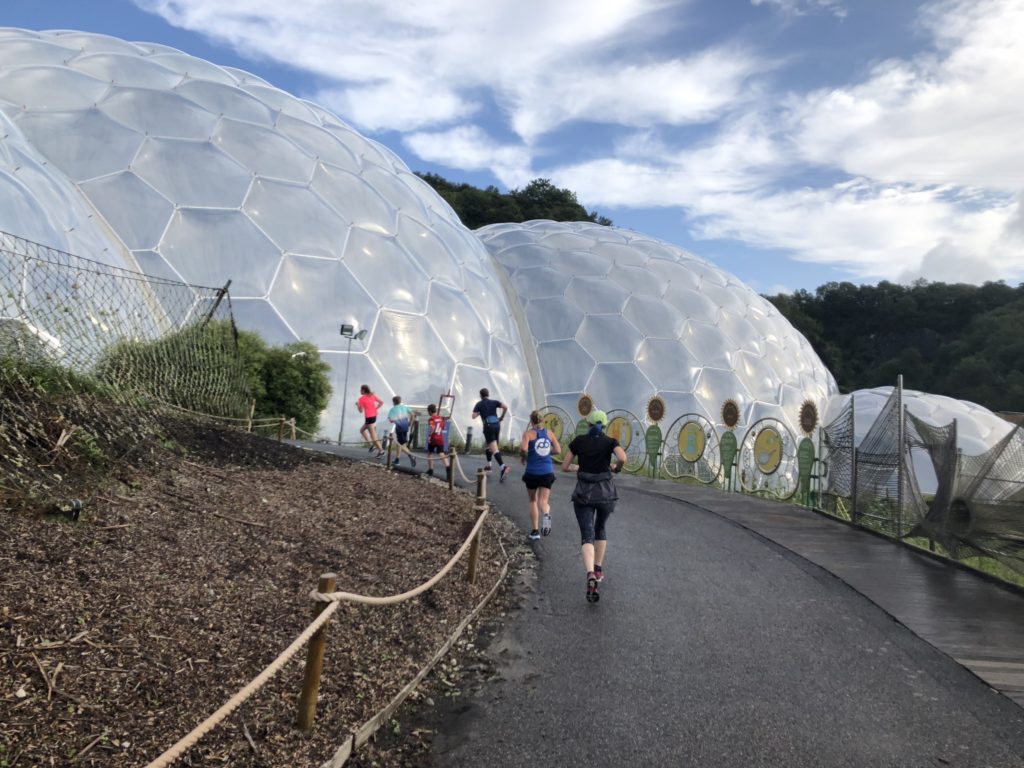