We’ve just got back from our first Airbnb short break. Regular readers will know we absolutely love Padstow in Cornwall. It is a real home from home for us. But in recent years, my eldest has grown to dislike it and my younger son has gone off it a bit too. We knew we wouldn’t be able to go for a week this year. My eldest had said categorically he wouldn’t go with us. Which is fine. He’s an adult. He doesn’t need to go with us. But ironically, after years of wanting to be independent, he’s discovered that he doesn’t actually like to be at home on his own.

We felt a holiday to Nice was better for three teenagers, and we had a lovely time.

But my husband, daughter and I still wanted to go to Padstow. And my younger son was very happy to go along for a long weekend.

So for a short break, the ideal seemed to be an Airbnb. We know people who have used them before and had really good experiences, but we’d never tried one.

We know Padstow like the back of our hands. There is a green building (like a large house or small hotel) in the fork of two roads very close to One High Street (where we stayed for three consecutive years). It looks derelict, but could be really nice with some time and money spent on it. Every year we wonder whether anything has changed with it, but it never has. However, it turns out there are a couple of rooms in its loft which aren’t derelict. In fact, they’re an Airbnb. 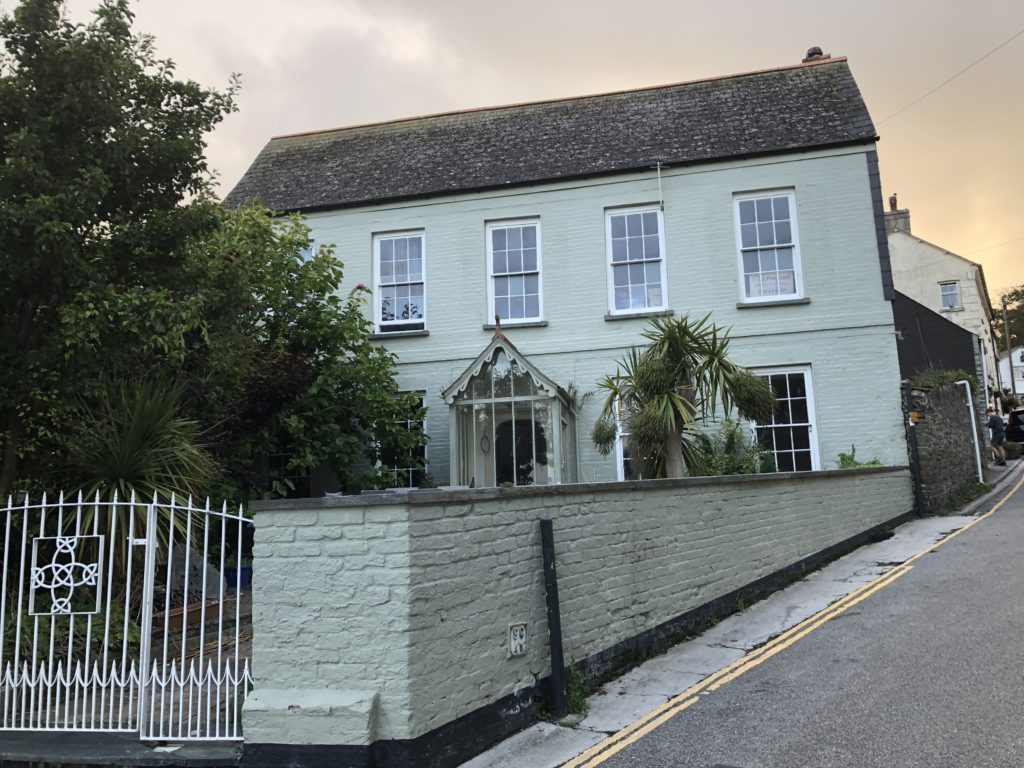 The description and photos online sounded very nice. Which is how we came to be staying at The Loft at Cross House in Padstow. I think we paid about £500 for three nights for four of us in August.

I know of people who have stayed at Airbnbs which are effectively a whole house. As we’re used to staying in self catering accommodation, we assumed that’s what we had. Then just a couple of weeks before we went, we realised that it was literally two bedrooms. But that was absolutely fine. 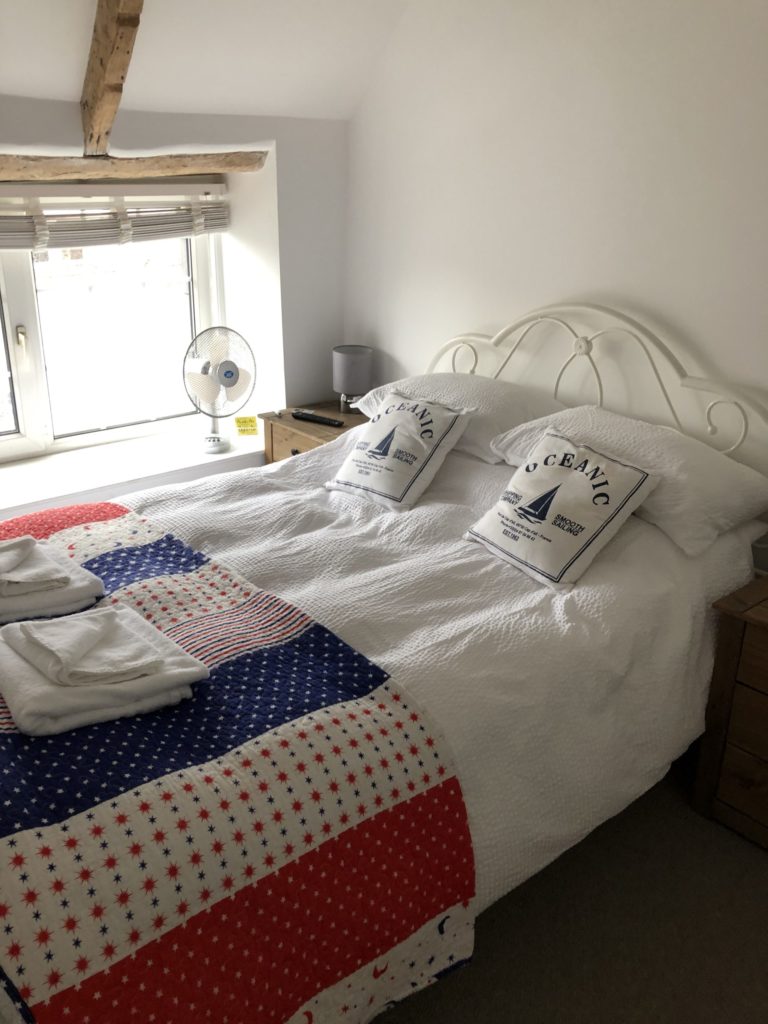 It is up a VERY steep staircase – so steep it’s almost like a ladder, so definitely wouldn’t be suited to anyone with mobility problems. (It does warn you about this on the website.)

There are lovely high ceilings with wooden beams and it is decorated simply, but nicely. There is a good size double room with ensuite. This room includes a tiny fridge and tea making facilities. We went shopping before we’d actually checked in and seen the fridge. It turns out it’s not big enough to stand a 4 pint bottle of milk upright! The bathroom has a small selection of hotel-style toiletries, and towels are included.

The other room has bunk beds and a desk. It says on the website (and on the bed itself) that the top bunk isn’t suitable for anyone over 4 stone. FOUR STONE?! That’s the weight of a very young child, and of course very young children shouldn’t sleep on the top bunk bed. We panicked a bit about this, so emailed the owner, who said that our slim 13 year girl should probably be OK. She said the top bunk wasn’t suitable for teenagers or adults, so she’d basically decided to set the limit at 4 stone. If you see the bed, it is a perfectly normal bunk bed. 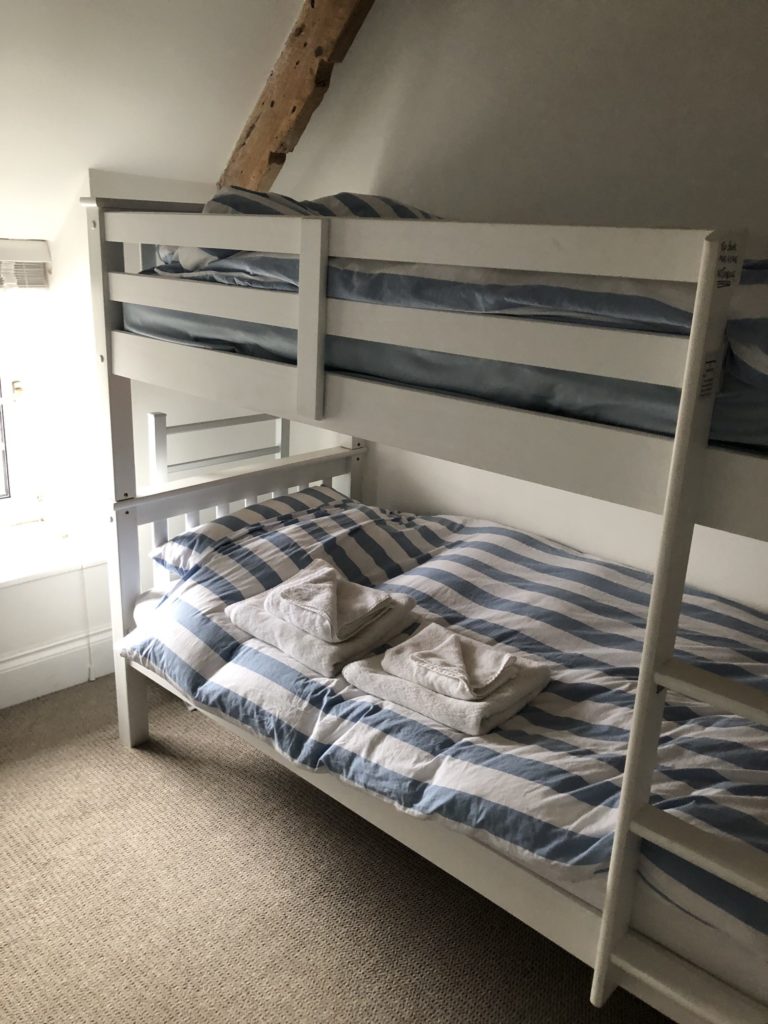 Both bedrooms have a hanging rail and a chest of drawers – plenty of space if you’re staying for a few nights or even a week. There is a portable heated rail in the kids’ room – suitable for drying wet clothes or damp towels. There is also an iron and ironing board in there. I think it is possible to just book out the larger room without the smaller room, but in that case you can still access the iron and ironing board from the other room. Obviously you couldn’t have someone you didn’t know staying in the other room because the only bathroom is in the double room.

There is Wifi in the Airbnb, but the signal is pretty poor, particularly when you have four people on their phones at the same time. My son found a solution – he went downstairs and sat in the hall, where he was able to watch YouTube with no problems.

It says on the website that there is only space for a small car. We deliberated over driving the Mini down, but can you imagine 200 miles with two teenagers squashed into the back of a Mini? So we took the Touran down and accepted we might have to park in a public car park and pay the price for a few days. As it happens, my husband was able to fit the Touran into the space, no problem.

The Loft was a good space for us for a few nights. It’s nice to have the flexibility of not going away for a full week. We would happily stay at The Loft again – or try out another Airbnb. 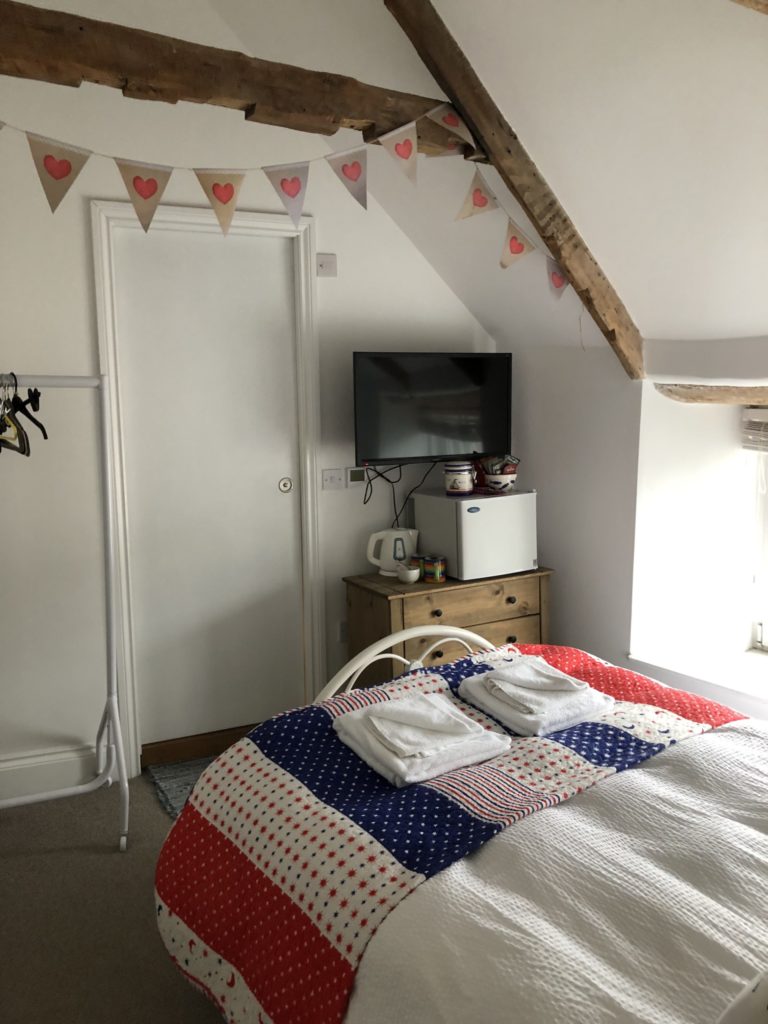