Night sweats, the perimenopause and HRT

About a year ago, I started sweating at night. In winter and only wearing underwear in bed, I would wake up literally drenched in sweat. Not every night, but two or three nights a week. Sometimes it was so bad that I couldn’t bear to get back into my soaking bed, so I would take myself to the spare room for the rest of the night.

I know that night sweats are a symptom of the menopause. I also know that they can be a symptom of some cancers. Either way, they’re unpleasant and were worsening my already crappy sleep. So I went to the GP. He thought I was a bit young for the menopause, but sent me for blood tests to check. I had to come off the pill for the blood tests, so that my hormones could settle.

And the night sweats stopped immediately.

They didn’t come back when I went back on the pill and the blood tests came back clear.

All through the ridiculously hot summer of 2018, the night sweats stayed away. Then in autumn they came back with a vengeance. This time they were up to five times a week. If the sweating didn’t wake me sufficiently, walking to the spare room did. So I tried putting a towel down on my bed. For someone who sleeps about as well as the princess and the pea, I was amazed that it actually worked and I was able to get back to sleep most of the time.

But I also needed to go back to the doctor.

This time I saw a female doctor. As it happens, she’s the expert on everything to do with women’s health at our surgery. She asked a few questions to rule out the possibility of cancer, then assured me that it was almost certainly the beginning of the menopause. Apparently the perimenopause – the time when your body is moving towards the menopause – can last for up to 10 years.

She said the blood test I’d had previously was pointless. The menopause isn’t a straightforward thing and your hormones fluctuate all the time.

There are plenty of symptoms of the menopause that I don’t have – like weight gain, urinary tract infections and ageing of the skin. But the night sweats alone were too much and I couldn’t carry on with them.

And I loved that. No messing about. No trying a thinner duvet or opening a window. Just sorting it out.

When she mentioned HRT, I was initially hesitant. I thought that was something people went on when they were in full blown menopause. I imagined myself on it one day, but not for a few years. And weren’t there health risks?

She assured me that the health risks are very low. All HRT is doing is replacing the natural hormones your body has lost. And she told me something I would never have thought of – the menopause is actually a fairly new phenomenon. In Elizabethan times, life expectancy for a woman was 35. In Victorian times, it was 49. Women just had a lot of babies and then they died. They didn’t actually go through the menopause.

I felt reassured by that. And I didn’t want the disruption and the discomfort of the night sweats any more.

So I am officially on HRT at the age of 45. I haven’t reached the menopause yet, but I’m on my way there. The night sweats haven’t gone away completely, but I’m down to about once every week or two.

I did hope that maybe it would help my sleep too, but that was obviously a step too far.

Have you reached the menopause? Are you on HRT? 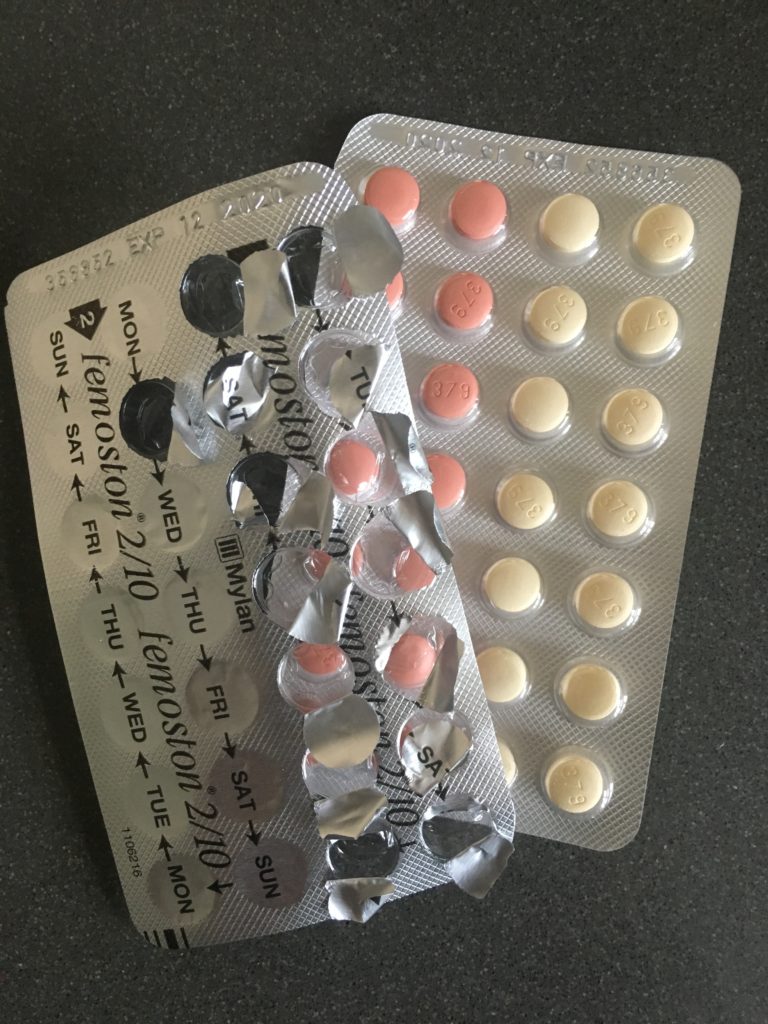