As I look forward to, and start to train for, my first ever marathon this year, I am continuing my experiments in fuelling. I’ve never bothered fuelling (eating while running) for a half marathon, but a full marathon burns up well over a day’s calories. If I’m to make it across the line, I need to know what I can eat.

I’ve already tried specialist energy foods, but they are quite expensive. I know a lot of people fuel with jelly babies or even cubes of jelly. Are special energy sweets actually any better than real sweets?

As a vegetarian, I can’t eat jelly babies or cubes of jelly. In fact, I can’t eat a lot of sweets as most sweets contain gelatine. But about 18 months ago, I discovered that Marks & Spencer does an extensive range of vegetarian Colin the Caterpillar sweets. And I also discovered that I like to eat them! There are 42 calories in a Colin, not much different from a Clif Blok. And of course they work out a lot cheaper. But how are they to eat while running?

They’re a little harder than the Clif Bloks and they took three or four separate bites to get through one sweet. It took me about a third of a mile to completely eat a single Colin. In terms of my stomach, they felt fine, but I didn’t feel any sort of specific energy burst with them. They would definitely be worth using again in the future, possibly mixed with the energy sweets, to keep costs down. 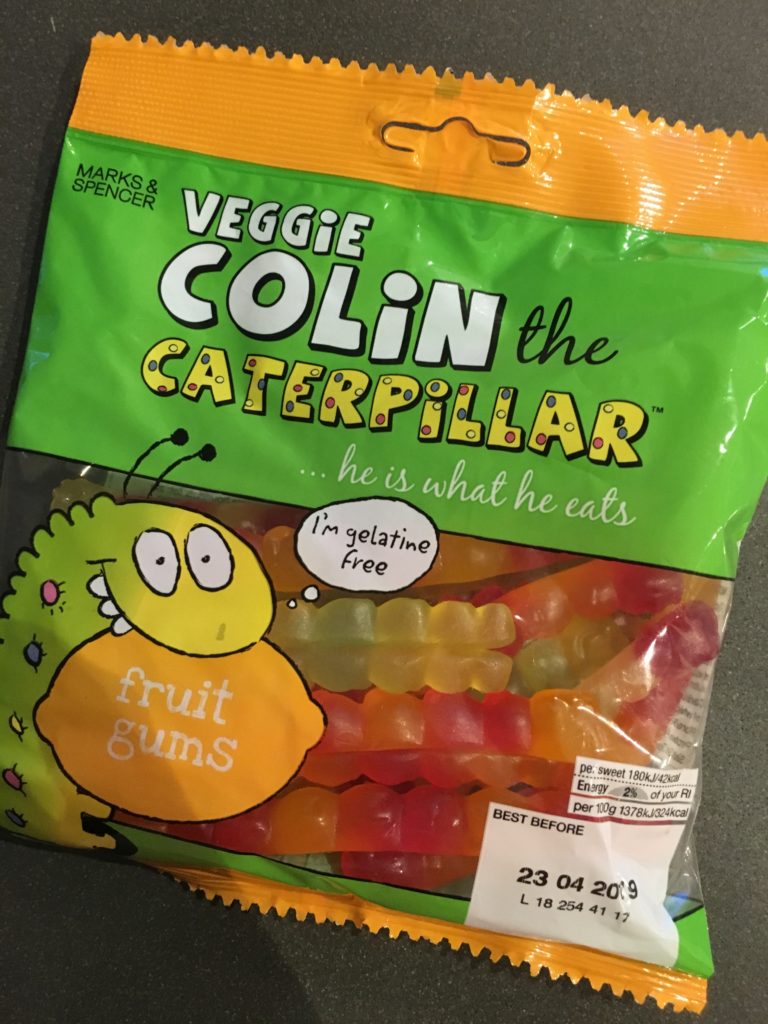 As a chocaholic, and a vegetarian who can’t eat many sweets, it is perhaps surprising that I had never considered eating chocolate while running. The thought had literally never crossed my mind. But then my friend Natalie from Plutonium Sox, a fellow blogger and vegetarian who is also training for a marathon, inspired me. She fuels with Poppets – those little chocolates that come in a cardboard box.

I would get some Poppets!

So I decided to use the closest thing I could think of – Maltesers.

Maltesers contain nine calories each. so to get a similar number of calories to the Colin the Caterpillars or Clif Bloks, I would need to eat four at a time. As with all my initial fuelling experiments, I was eating them after three miles and six miles on an eight mile run. My husband laughed at me fuelling myself for a run that would burn 800 calories with just 72 calories. But I do a run that burns 1300 calories (a half marathon) with no fuel. It was a good reminder that I need to take on a lot of fuel to make any sort of dent in the calories I will burn for a marathon.

The best thing about Maltesers is they were the easiest thing to eat while running. Yes, easier than gels. I just bit them in half, chewed them briefly and swallowed them. I had no worries at all that I might choke. Like everything Ive tried though, they did make my nose run!

The other good thing about Maltesers is they are much cheaper than energy sweets and gels, but they definitely don’t give the same energy boost.

You can read about my experiments in fuelling with real foods here.