I’ve spent my entire adult life as a runner and have run more than ever in recent years. But I’ve never felt the need for fuelling. But I know that will have to change for my first marathon, in Newport in May. With only 16 weeks to train for the marathon, I knew I had to start learning before then what I could comfortably use as fuel as I run. It needs to be something that will give me an energy boost, but also something that my delicate stomach can cope with (I have IBS, which will sometimes affect my running).

I was pleasantly surprised that my experiments with gels and energy sweets worked well, but I don’t think I could use them for an entire 26 miles. That would definitely be asking for trouble for my stomach.

So I thought I would give some real food a go.

I eat pitta bread two or three times a week – either toasted with cheese or peanut butter or as the base for my own vegetable pizzas. I find it easier to digest than normal bread, plus it’s less likely to get squashed and messed up in a running bag. So I thought I would try some pieces of pitta bread with peanut butter.

Peanut butter is a great energy food, but it is slow release energy, not like gels.

I toasted my pitta, spread it with peanut butter, cut it into tiny pieces, wrapped it in foil and put it in my running belt (I’m definitely going to need a more spacious belt or bag soon!).

I ate my first piece after three miles of an eight mile run. I expected to find it hard to eat, but actually it wasn’t any more difficult than the Clif Bloks, which are designed to be eaten while exercising. The trick was to drink before and afterwards and to chew it a bit more than I would normally, so it was very easy to swallow. I had another piece after six miles and it didn’t give me any problems.

It didn’t give me a massive energy boost or make me feel any different, but it could be good to eat in the first half of a run, to build up the energy stores for when I need them. I could then boost them with the Bloks or gels.

Anyone who has read my blog before will know the the flapjacks most definitely weren’t going to be homemade. I went for the tiny, bite-size supermarket ones. Except that I tried them a few days before Christmas and the supermarkets only had their poshest ones with extra butter in stock.

When I took my first taste of flapjack, the butter just tasted gross and way too rich. I was tempted to just throw it away and give up, but I persisted. Again, they weren’t particularly difficult to chew or swallow, as long as I chewed them up a lot. I didn’t like the buttery taste, but it didn’t have any sort of negative effect on my stomach. Like peanut butter, flapjacks are slow release energy, so they didn’t give me an instant energy boost. I’m going to try them again with a cheaper, less buttery version, because I wouldn’t want to have the rich ones again.

There’s still more experiments to come, but it’s good to know that I have already found things I can eat comfortably. Next, I will be testing them over much longer distances and probably in combination eg peanut butter pittas for the first half of race with the Bloks or gels in the second half. 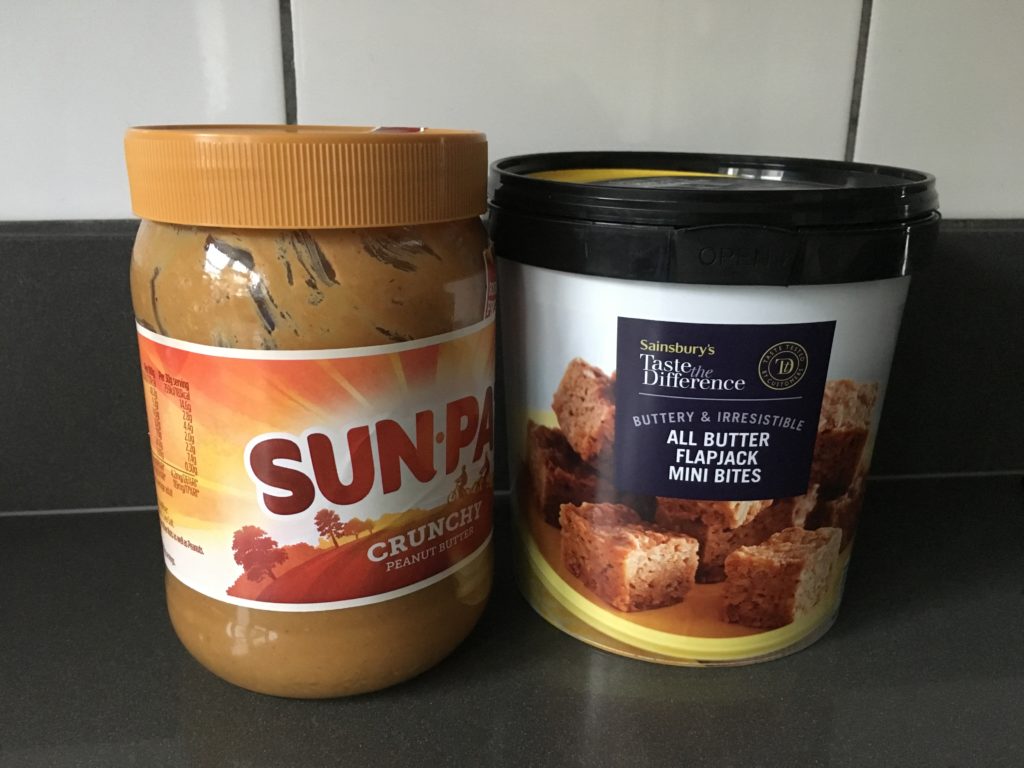