Stroud half marathon – a wobble

As we were both feeling strong in the run-up to the Cheltenham half marathon, my husband and I agreed we would sign up for Stroud three weeks later if we stayed injury-free. To be honest, I had no idea or not if I was injury-free when I signed up for it the day after Cheltenham. Everything hurt and I could barely move.

Unfortunately, my husband realised he couldn’t go after all as he had tickets for a football match. So it was just me.

Then I had an injury blip.

I wasn’t going into Stroud in the right way – physically or mentally.

I seemed to get over the injury, but I still hated the fact that I was having to go there completely on my own without any of my family to support me.

Even though my husband and I haven’t actually run that many of the same half marathons, he has always driven me there and been there to support me, apart from the Forest of Dean half marathon in 2013.

Because I’m a worrier. New experiences stress me out. My husband keeps me on the straight and narrow and lets me know there’s no need to worry about driving, parking, toilets, availability of food and drink, crowds and hygiene – my main worries (yes, there are a lot of them!).

I also hated the fact that Stroud has a complete ban on running with music. A lot of half marathons say you shouldn’t run with it and lots of people, including me, ignore it. But Stroud is particularly strict. I know lots of running purists say that music takes away the pleasure of running, but for me it’s essential. I always listen to music when I’m running, even just three miles for Parkrun. I also listen to music when walking, driving, cleaning or doing work which doesn’t require much brain power. In short, music is really important to me.

On half marathon day, I got up just after 5. It was dark, very dark.

I was stressing about clothing choices. It was cold, very cold. All week the weather had predicted 10 degrees, but it was a lot colder than that. Should I ditch the vest for long sleeves? Should I swap the shorts for three quarter length leggings?

In the end I went for the leggings, but stuck with the vest. My husband told me to put an old long-sleeved top over my vest and chuck it away at the start.

When I said goodbye to my daughter, she asked me not to go. And I could so easily have stayed at home. I just wasn’t feeling it at all.

I had such a feeling of triumph when I completed the Cheltenham half marathon in such a good time, but somehow I didn’t think that would happen at Stroud. In my head, all the miles were slow.

But it felt difficult. I didn’t want to be running in a strange place. I like running in Cheltenham because I know it so well.

It’s not like me to get into a negative frame of mind about things, especially not running. But everything is harder when it’s dark and you’re on your own. I really wished I hadn’t signed up for the Stroud half marathon.

It was still dark when I left the house. Did I mention that, as well as hating driving to new places, I really, really hate driving in the dark? I hadn’t even considered that it would be dark when I set off.

I put my music on loud in the car to cheer myself up. As soon as I started driving, it started pouring with rain – one more thing to worry about.

I’d chosen the easiest car park to find, which the website had said was free, but I arrived and it was a pay and display! And I only had a couple of fivers to get myself some food. But then I looked at the sign – charges only apply Monday to Saturday. (Almost) my final worry was finding the venue, and I was lucky enough to find someone who knew where he was going, so I walked with him.

I arrived very early, then just had an hour and 10 minutes of worrying about the toilet and whether or not I should keep my sports hoodie on. I chatted to a couple of people, but pretty much everyone was in groups, mainly running clubs. Only I would be stupid enough to travel there completely alone.

As we headed for the start line, the wind dropped a bit and it finally felt just a little bit warmer. I took off my old top and waited in my running vest for the race to start.

It was time to stop worrying about crap and start running.

Find out how I got on here. 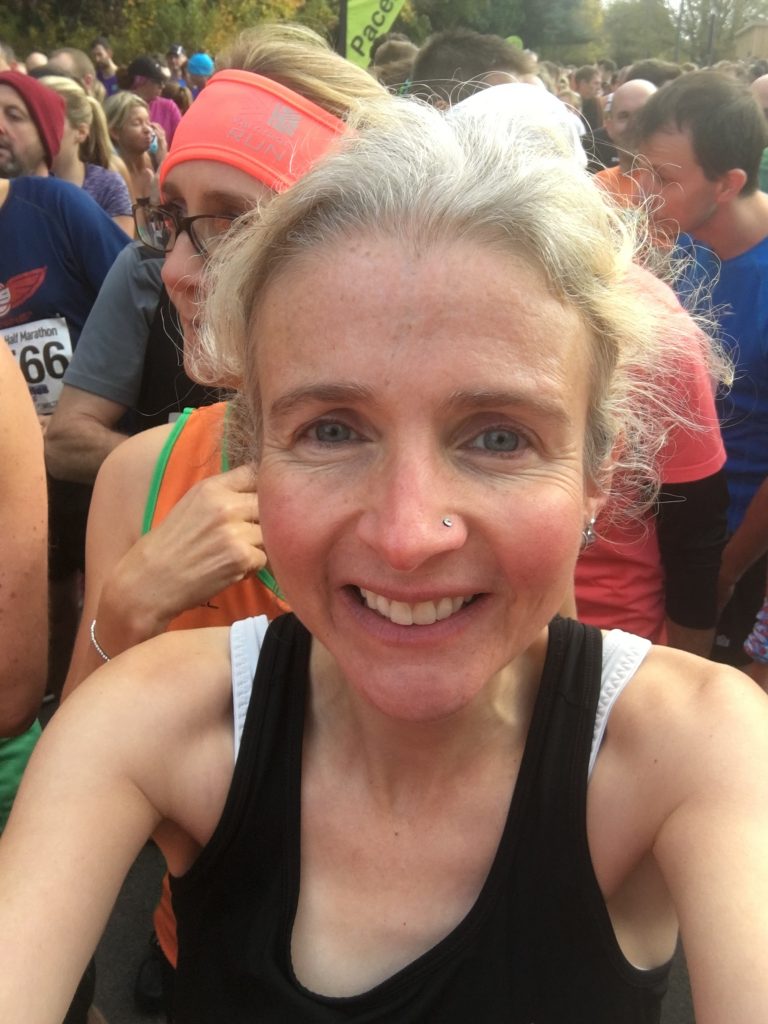